SHOULD YOU know of anyone organizing an expedition to Van Diemen's Land, or Thibet, or the South Pole, or Mars, I'd appreciate an opportunity of wangling a job with it for Hamish, our composing room messenger.

This morning, Hamish, in the editorial presence, delivered himself of a slang term which irritates me. Having just read Lord Tweedsmuir’s remarks on the safeguarding of the English language, I quoted them to Hamish:

"English is capable of expressing the loftiest thoughts of mankind, the profoundest depths of human passion and every shade of human comedy. But to get the value out of it, you must respect structure, keep it tight and compact and organic. The three dangers that beset the English language today are jargon, semi-scientific phrases and jazz style.”

I said to Hamish that I hoped he would remember that.

An hour later, Hamish walked in again with a sly look in his eyes. Said he: "Well, you've cooked your goose now so far as Lord Tweedsmuir is concerned. Look at that new serial you are starting in the July 15 issue. It’s filled with jargon. Even the title— ‘Horse Doctor.’ The yarn isn’t about horses or vets. It’s about marathon swimmers. You ought to be ashamed of yourself, you, an editor, ha, ha, letting the English language be murdered like that.”

I smiled faintly and explained that an author cannot very well depict definite types of character without following their mode of speech; that sports writers refer to a “stable of swimmers” and that, arising from that phrase, the term "horse doctor” was applied to those associated with marathon training camps.

“So what?” said Hamish. I said "Well.” Hamish said “Well?” This went on for some time. So, if you know of anybody organizing an expedition, will you please drop me a line in confidence.

q HOWEVER, GOING back to "Horse Doctor,” which opens on page seven of this issue, I think this two-part story is going to make you chuckle. James A. Cowan, Toronto newsman who wrote it, has handled publicity for several of the big swims of recent years and knows the atmosphere of training camps and the idiosyncrasies of those who emerge from them to spend a whole day forging or floating round the Great Lake system and its tributary bodies.

(j ALL IN all, this is quite an aquatic issue. In the case of "A Man and a Hundred Maids,” Frank Bunce’s summer romance on page twenty, the man wasn’t a marathon walrus, but he could swim well enough to get a job as lifeguard at a girl's camp. Heading off any tendency to eye-rolling on the part of our male readers, it should at once be pointed out that Randy Williams had to promise that he would not fall in love

with any one of them. This because the camp had had to make sixteen changes in one season. The guards would succumb to the charms of one girl and all the other girls would threaten to leave the camp. How did Randy get along? That’s where the story comes in.

ON PAGE twelve we encounter more water. This time it's salt, and we are on it, not in it. Aboard the liner Venetia, we observe that very mild and insignificant Mr. Brown, dodging his watchful wife to play cards with men who are well known to the purser as sharpers. There’s considerable mental excitement before we learn that the result is, as Brandon Fleming and Dennis Morley call their joint story —"Honors Easy.”

IF PERCHANCE it is a little chilly on the ocean, it’s no distance at all to the sizzling Indian jungle. Just turn to page sixteen, where eerie happenings are recorded. Mysterious death, Indian superstitions, a ghost tiger and a calm police commissioner—all are in “Nemesis in Hind,” by Allan Swinton, who, after two or three years in England, is on his way back to Victoria, B.C.

(jj AS THEY themselves put it, David F. Griffin and Hec Phillips, former members of Canadian Olympic teams, "go right out on a limb,” by forecasting that at the Berlin games this summer, Canada’s track and field representatives are going to clean up four or five events. Their prophecy and the reasons therefor are engraved on page ten.

On page eleven our old parliamentary sleuth, A Politician With a Notebook, riffles the leaves of the chronicles of the session just ended and sighs or crows as occasion warrants.

"Treasure Under the Arctic’s Rim,” are described by Leslie Roberts on page nineteen. This, the third article on his travels through the new goldfields of the Far North, tells of what is going on today at Great Bear Lake.

(| NEWS OF the resignation of the Taschereau Government came in just as the July i issue of Maclean's was on the press, adding interest to Victor C. Soucisse’s series—"Revolt in Quebec.” On page fourteen of this issue there is presented the second article, which reveals just what it is that the new factions in French Canada are dissatisfied with and what they are seeking.

The strange case of Gun-a-noot, an Indian who defied the B.C. police for & \ thirteen years and emerged from his trial in the rôle of a hero, is recorded on page twenty-two by N. de Bertrand Lugrin.

Elisabeth Sanxay Holding, Borden Chase and James F. Dwyer, all in our next issue, will make the reason for their success obvious. 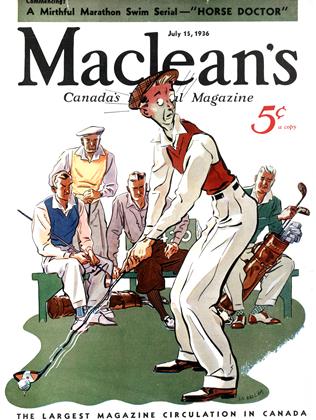