FURY" is a picture that every adult should see and that every child should be kept away from. It is the story of a lynching, and is handled with such vividness and savage power that you will remember it as long as you remember anything on the screen. The hero (Spencer Tracy) is a garage mechanic who goes to a distant town to meet his sweetheart (Sylvia Sidney) and is arrested en route as a kidnap suspect. He is lodged in the county jail, and we are then shown the .slow and terrible rising of mob insanity, directed against the innocent man and culminating at last in the assault and burning of the jail witli the victim inside.

For terror and ruthlessness the mobscene has probably never been equalled on the screen. Nothing has been softened, you are made to feel inescapably that when lynchingsoccur this is the actual form they take. Spencer Tracy is perfectly cast as the hero— at first bewildered, then driven almost to madness by the strange forces let loose against him. Though it weakens a little, dramatically toward the end, “Fury” is a bitterly effective picture, unusual enough lx>th in treatment and material to be of interest to adult audiences everywhere.

A NUMBER of recognized experts, ineluding Robert Edmond Jones, colorist, and Rodgers and Hart, lyrists, had a hand in “The Dancing Pirate,” latest technicolor release. As sight and sound it is excellent, but unfortunately it developed plot trouble early in the picture and wandered off into a long complicated narrative about a pirate who was really a dancing master, a Spanish officer who was really an outlaw, and a beautiful Spanish girl (Steffi Duna) engaged to one and in love with the other.

Frank Morgan as a spluttering Spanish grandee supplies the comedy, and is amusing as usual. The Spanish fiesta costumes and the scarlet uniforms provide the handsome color that Robert Edmond Jones likes best to manipulate. But even these don’t make “The Dancing Pirate” more than very moderate entertainment. After all, it’s a long plot that has no turning.

PRIVATE NUMBER” deals with the very personal life of a personal maid. The personal maid is Loretta Young, and since the son of the house is handsome Robert Taylor, things soon take the course that anyone might expect who has half an eye for the movies. “Private Number,” in fact, is nothing more nor less than our old friend “Way Down East” turning up, this time in an improved residential district. In this case, however, the incorrigible Patsy Kelly is present as an under housemaid and adds considerable liveliness, and Basil Rathbone is impressive as an icy butler, the supreme dictator below stairs.

The chief point of interest in the picture, in fact, is the description it supplies of kitchen fascism in the homes of the terribly rich. The story itself is old-fashioned stock-company melodrama. Miss Young bears up well as the persecuted heroine who is driven homeless and disgraced into the street by her cruel employers. She looks extremely attractive, too, in her smart uniforms, and in the simple tailleurs she wears on her one evening a week off. It seemed too bad they couldn’t have given her something a little more current by w’ay of story.

TDULLETS or Ballots” is crime in the style to which we are accustomed. The criminals in this picture shoot first and talk afterward, when they talk at all. Mostly they go in for action—pouring kerosene on fresh vegetables, working the numbers racket, and wiping out publicspirited investigators. It’s another description of the United States war on crime. Edward G. Robinson this time is on the side of the law. At the other end of the scale is Humphry Bogart, at present the screen’s public killer No. 1. Somewhere in between, just on the twilight edge of respectability, is Joan Blondell, as a nightclub hostess who works the number racket but is redeemed by her pure love for a policeman.

Edward Robinson’s performance, as usual, is excellent, and the picture is exciting and sharply handled. Most of the material is familiar, however: it’s just the usual crime angles sorted out into a new pattern. Law triumphs over wickedness in the end, as a lesson to the young. But sensible people who go to see “Bullets or Ballots” will probably leave the young at home in bed.

A CRAZY assassin, a cage of lions and two hanging parties provide plenty of trouble for two in this screen dramatization of (among other things) Robert Louis Stevenson’s “Suicide Club.” It’s about Prince Florizel (Robert Montgomery) who decided to have a last fling at freedom before settling down to a royal marriage. So he goes to England, where he becomes acquainted with the Young Man with the Cream Tarts (Louis Hayward) who introduces him to the President of the Suicide Club (Reginald Owen). Through the president he meets the beautiful Miss Vandaleur (Rosalind Russell), who in turn introduces him to the cage of lions.

It’s all very formal. In fact the whole picture is much more leisurely and elegant than the screen murder mysteries we are accustomed to. If you want romantic adventure but don’t want to get all worked up in the warm weather, “Trouble for Two” is fair enough entertainment.

HTHE GOLDEN ARROW” is about a beautiful heiress (Bette Davis) who persuades a poor young reporter (George Brent) to marry her, in order to keep off fortune-hunting foreigners and give her a chance to look around for someone she really wants. As it happens, however, she has already done all the looking around she intends to do, and the person she really wants is George Brent.

It’s the sort of story that takes a lot of manipulation to make it believable, but the scenarist has got round that by making the circumstances very elaborate and the hero rather simple. The heroine isn’t really an heiress at all, but a set-up for a coldcream advertising campaign. And when the hero discovers this and finds that he doesn’t have to spend his life living in abject luxury, he forgives her for her deceptions and everything ends happily. It’s fair comedy, thanks largely to Bette Davis’s gay and sparkling performance as the cold-cream heiress. 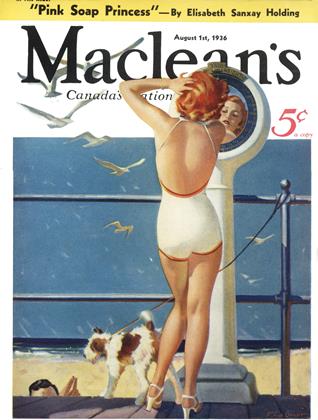