It IS CLEAR by this time that there are only two ways of looking at "Green Pastures;" you must either find it blasphemous and ridiculous or tender, humorous and deeply religious. I thought it a grand picture-meaning simply that it had grandeur of a very special kind rarely met with on the screen. It isn't often that a picture contrives to be epic and endearing at the same time, hut "Green Pastures" does. It's a spectacle film that touches the heart rather than a show piece, designed, like most spectacles, to knock the eye out. T4~ +~ fr.,-, r~f

It presents the negro conception of heaven as a place of gentleness, jollity and plenty, where loving kindness goes on for ever and the fishing season never closes. From “de Lawd” down to the smallest darky angel with marabout pin-feathers, everyone acts with the same wise innocence and gentle courtesy; while the negro spiritual choruses are as beautiful as anything we are likely to hear this side of heaven. Warner Brothers haye made the screen play considerably more elaborate than the stage production, but they have not sacrificed any of its simplicity or sincerity of feeling. On screen or stage “Green Pastures” is probably the greatest folk play ever produced.

SAN FRANCISCO” is the season’s biggest and most spectacular thriller, with an earthquake climax so overwhelmingly handled that it makes you feel like rushing out of the theatre into the safe street. Everything is built up to the big final scene, and though it takes almost two hours to arrive it’s worth waiting for when it comes. Buildings pour down, pavements gape, the whole city shudders into a heap to the accompaniment of what sounds like a full orchestra of all the vacuum cleaners in the world. When the dust clears at last, Clark Gable is seen among the ruins searching for Jeanette MacDonald—he is Blackie Norton, proprietor of the Paradise Café, and she is a choir girl temporarily employed as a café singer, and their romance had become so badly upset that it took an earthquake to shake it right side up again.

Director van Dyke has handled the action in a way to make their troubles seem exciting and important, though not naturally as important as the earthquake. Clark Gable gives a good straightforward performance as Blackie Norton, and Jeanette MacDonald as always is in fine singing voice—though a little uneasy in her speaking parts. Because of the sheer violence and realism of the final sequences “San Francisco” is an unforgettable picture. It’s as close to being actually present at an earthquake as most of us would care to come.

'"THERE SEEMS to have been an Adopta-Waif campaign among the comics recently. Charlie Chaplin, Laurel and Hardy and now W. C. Fields have each in turn become foster-father to a beautiful orphan. In his latest feature W. C. Fields appears in the sumptuous rôle of Professor Eustace McGonigle, patent medicine ven-

Mr. Fields, who is ready to wheedle anything from the public, from a hot dog to a million dollars, for the sake of his foster-child, seems on the whole to take his fatherhood more casually than the rest of the comics. It’s the wheedling that interests him. not the lovely waif. He sweeps superbly from petty to grand larceny, loses his hat and recovers somebody else’s, mutters and cogitates, never succeeds in gaining the respect of the public and never falters in his esteem for himself. Rochelle Hudson and Richard Cromwell are attractive as the young lovers, and if they seem too much in evidence through the picture it is probably because as long as they are on the screen W. C. Fields is off it.

The Princess Comes Across

SINCE it’s hard for a beautiful girl to be really funny, Carole Lombard is probably more competent than amusing in her latest picture. She appears as an actress masquerading as a princess, and talks with a muffled Scandinavian accent, looks a little like Dietrich, intones a little like Garbo, and is smooth and assured and brilliantly turned out like Carole Lombard.

A small-time American actress, she returns from Europe to her native land on the crest of a wave of advance publicity which is designed to make her a fabulous screen personality. But love comes in at the door, so riches fly out of the window. It all takes place aboard a liner and there are the usual series of murders, always present in the movies to lighten the monotony of travel. Fred MacMurrav, operating a concertina, is the hero. “The Princess Comes Across” is fair summertime entertainment, easy to look at, easy to follow, and easy to forget.

Trouble For Two. — Adventures of Prince Florizel, who runs away from his royal fiancée and gets into real trouble with the President of the Suicide Club. With Robert Montgomery, Rosalind Russell. Fair entertainment.

The King Steps Out.—More troubles of royalty. Romance of Princess Elizabeth of Bavaria and Emperor Franz Joseph of Austria. With Grace Moore and Franchot Tone. Fair but not one of Miss Moore’s most successful films.

Fury.—An impressive picture about a lynching, with Spencer Tracy as the victim. Adults should see it, hut better leave the children at home.

The Golden Arrow.—George Brent continues his novel writing, this time with Bette Davis as the distraction. Summertime entertain-

Things To Come.—The future as Alexander Korda and H. G. Wells see it, and a very bad outlook for the human race. It’s spectacular and fantastic, however, and ought to be seen. Small Town Girl.—A village grocery clerk (Janet Gaynor) contrives to go to town. For those who like Cinderella stories.

The Prisoner Of Shark Island. — Impressive and authentic account of the strange life and fate of the famous Dr. Samuel Mudd. With Warner Baxter. Highly recommended. 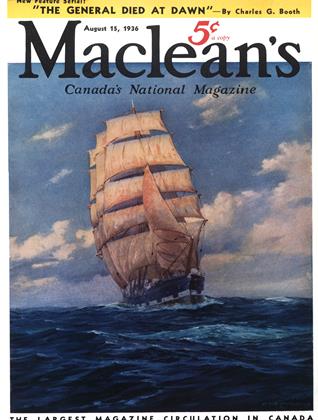