Some Things to Come

AT THE time of writing the first waves of advance publicity regarding Metro - Goldwyn - Mayer’s “Romeo and Juliet” have begun to reach us. Stills showing Norma Shearer and Leslie Howard in the balcony scene have appeared. Both Miss Shearer and Mr. Howard are reported to be superb. John Barrymore, who appears in the ¡acture as Mercutio, is said to be magnificent. Clark Gable, who doesn’t appear in it but saw the preview, is reported enthusiastic. Metro-Goldwyn-Mayer themselves describe the picture as “a new miracle.” It is one of the most important films of the year, and by the time this reaches print will probably have made its world premier. And with the appearance of “Romeo and Juliet” the fall moving picture season may be said to be wide open.

To judge by the advance lists, 1936-37 is to be a record year in the industry. This season, apparently, the producers have determined to take care of everybody, from their best friends to their severest critics. Warner Brothers are leading off with the screen version of “Anthony Adverse,” best seller of two years ago. The twelve hundred pages of Hervey Allen’s novel have been condensed to feature-length, with Fredric March playing the rôle of Anthony. It’s studded with stars, including Claude Rains, Olivia de Havilland, Anita Louise and Edmund Gwenn, and promises to be as lavish and prodigious as the novel.

Then there is “Lost Horizon” from the James Hilton novel. It is being directed by Columbia’s Frank Capra, the only Hollywood director whose name actually takes precedence over his stars. Until now all the Capra successes have been romantic comedies. “Lost Horizon,” which stars Ronald Colman, is a dramatic fantasy set in the Tibetan mountains and is said to be me of the most difficult pictures ever attempted in Hollywood. No one knows quite what to expect, but with the versatile Capra in charge everyone expects the best.

Two Garbo pictures are announced— “Camille,” with, tentatively, Robert Taylor to support the star; and “Beloved.” with Charles Boyer. The latter is a tale of love and international intrigue in Napoleonic times. The details of the Garbo pictures still remain a studio secret, but we can be sure that Metro-Goldwyn-Mayer

will give Miss Garbo every opportunity to make good.

Paramount have scheduled two pictures for Marlene Dietrich, one to be directed by Ernst Lubitsch. Katharine Hepburn will appear in “Mary Queen of Scots,” Helen Hayes’ stage success. Norma Shearer will be seen in “Marie Antoinette” and “Pride and Prejudice,” and Claudette Colbert in “Maid of Salem.” Helen Hayes, it seems, will remain on Broadway.

One of the surprises of the advance lists is the number of “prestige” pictures noted—pictures, that is, which Hollywood turns out as an artistic experiment with every expectation that they will lose money at the box office. This year they are filming Sean O’Casey’s “The Plough and the Stars” under the direction of John Ford who made “The Informer.” “Winterset,” Maxwell Anderson’s fine poetic drama, is also being shown, with the Mexican actress Margo playing her stage rôle. In addition there is “The Good Earth,” with Paul Muni and Luise Rainer ingeniously cast as Orientals. The latter picture is a simple moving tale of a remote people, and to judge by the stills already released will be a film of exceptional beauty and distinction. It may even be a popular success, for prestige pictures occasionally surprise their producers by turning into sound cash investments. Finally there is George Bernard Shaw’s “Saint Joan,” with Claudette Colbert in the leading rôle. The last named film, however, can scarcely be described as a prestige picture, since it offers so few risks at the box office. The prestige group will go to “Saint Joan” and the rest will go to see Miss Colbert.

Another surprising development is the sudden flurry in technicolor. For a year

the producers have been sitting with their fingers crossed, each waiting for the others to commit themselves to technicolor. All this has changed. It may be that the high cost of technicolor has come down or that the industry has simply grown tired of having its money burning a hole in its pocket. At any rate a dozen new technicolor films are scheduled. Paramount will produce “Spawn of the North” with Carole Lombard, and “Slave Ship” with Gary Cooper. “Beau Geste” will be revived in color and Warner Brothers are preparing “Desert Song” and “God’s Country and the Woman.” In addition there will be “Ramona” (Twentieth Century-Fox), “Arabian Nights” (ParamountWanger), “Snowwhite and the Seven Little Dwarfs,” a Walt Disney featurelength cartoon, and two English pictures, “Wings of the Morning” and “Lawrence of Arabia.” One of the most important as well as the most imminent technicolor films is “The Garden of Allah,” starring Marlene Dietrich. Miss Dietrich is said to have taken a deep interest in her first technicolor, going to great pains to select fabrics and colors that will do her every bit of justice.

The children have not been neglected, at any rate not entirely. In addition to the Walt Disney fairy tale mentioned above, there will be a film version of Mark Twain’s “The Prince and the Pauper” (Warner Brothers) and also of Kipling’s “Kim” and ‘‘Captains Courageous” (Metro-Goldwyn-Mayer), in both of which Freddie Bartholomew will be featured. Twentieth Century-Fox, too, have been working nights and holidays, trying to keep ahead of Shirley Temple’s growth, and several Temple pictures are said to be finished and ready for release.

Musical comedies and revues as usual are to have a big season. The two perennials, Warner Brothers “Gold Diggers” and Metro-Goldwyn-Mayer’s “Broadway Melody,” are tc be with us again, the former featuring Dick Powell, Ruby Keeler and the Warner Brothers musical comedy shock troops, the latter presenting Eleanor Powell and Sid Silvers, who will also appear in “Born to Dance” and “Easy to Love.” Nelson Eddy and Jeanette MacDonald are scheduled for “Maytime” and at least one other picture. Grace Moore will appear in a picture, still untitled, and there will be a revival of musical comedy stage successes —“The Red Mill,” “The Firefly,” and Victor Herbert’s “Sweethearts.”

There has recently been such an extensive exchange of Hollywood and English stars that the American and English industries have been practically internationalized. Ann Harding will appear in an English film suitable to her talents. Edward Everett Horton will be featured in an English fantasy-comedy, “The Man in the Mirror;” the Canadian Ned Sparks will have the leading comedy rôle in “Two’s Comedy;” Boris Karloff (without makeup) will appear in a mystery-thriller, “The Juggernaut;” while Victor McLaglen is listed for the British-Gaumont production of Kipling’s “Soldiers Three.”

London Films, headed by Alexander Korda, have issued an impressive list of prospects: “Knight Without Armor,”

co-starring Marlene Dietrich and Robert Donat;” “Rembrandt,” with Charles Laughton, who will also appear in “I, Claudius,” film version of the Robert Graves novel. In addition there will be a Réné Clair production, and Kipling’s “Elephant Boy” to be directed by the Canadian Robert Flaherty.

Comedies will include two Laurel and Hardy feature films, two W. C. Fields pictures, the Marx Brothers in “A Day at the Ball Game,” and Harold Lloyd in a production of his own. Mae West will be seen in “Personal Appearance,” appearing for the first time in a story written by somebody else.

Altogether the motion picture industry seems to have covered the field of entertainment as thoroughly as possible. If we don’t go to the movies this season it won’t be because the producers have spared time, talent or expense in giving us what they think we want. 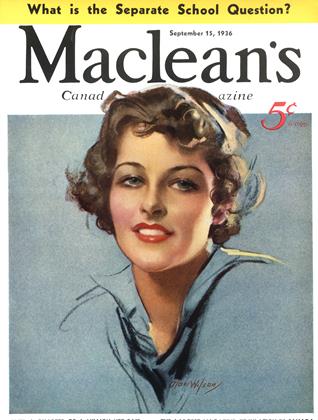