PERSONAL APPEARANCE” the Broadway stage success, might have been written for Mae West. Not to take any chances, however, Mae has rewritten it, retitling it "Go West, Young Man” and assigning most of the best lines, her own and the author’s, to herself. The picture is funny and fast and holds up well ; altogether it’s the best Mae West film in a long time. Mae’s films have always been a little weak on plot and here, at any rate, she has a good stout scenario to build on.

She is the movie queen, Mavis Arden, who, on a personal tour, finds herself stranded in a combination farmhouse and gasoline station. Here her fancy lands squarely with the usual Mae West impact on a handsome young gasoline attendant (Randolph Scott). The problem then, which is taken care of by practically everyone in the cast except Mae, is how to save Mae from herself and everybody else from Mae. The original play was farce-comedy, but Mae has ironed out most of the subtleties and plays it as straight burlesque. Incidentally Mae has added to her own personal appearance by about fifteen pounds. I lowever, since nothing else in the picture has been curbed, this doesn’t make a great deal of difference.

V\71VES NEVER KNOW” is the ** latest comic-strip adventure of Charles Ruggles and Mary Boland, favorite Mr. and Mrs. of the screen. They are the Homer Bigelows, a devoted pair whose domestic happiness is perfect till a visiting novelist (Adolphe Menjou) persuades them they are living the life of vegetables. So Mr. Bigelow takes to night-life and Mrs. Bigelow to suffering, and everything is confusion till Mr. Bigelow finally falls out of a second-story window into the shrub bery and is knocked sensible, none too soon. It’s funny in places. If you are acquainted with the Ruggles-Boland adventures, you will know pretty well what to expect of “Wives Never Know.”

TN CASE you have overlooked Irene Dunne’s talent for comedy, you should treat yourself to her latest picture. There’s a lot of genuine rowdiness under Miss Dunne’s demure manner, and practically all of it gets to the surface in “Theodora Goes Wild.” Even Mae West couldn’t have dressed herself up more command-

ingly in a costume made up of nothing but ostrich feathers, or caught the camera more squarely in the eye than Miss Dunne does in her latest film.

She is a small-town girl with a wistful longing for the city, which she takes out in writing novels. Then Theodora goes to New York and discovers there is more to city life than even a literary girl can get down on paper. The city hero (Melvyn Douglas) who has encouraged Theodora to abandon the simple life, soon has his hands full trying to escape from the far from simple Theodora.

People who have admired Miss Dunne from a respectful distance can now admire her more than ever, and don’t need to feel nearly so respectful about it. After all the suffering she has done on the screen, she deserves all the fun she gets—and contributes—in “Theodora Goes Wild.”

rPHAT OLD problem about woman and -L her career turns up again in “A Woman Rebels,” and we are asked to watch Katharine Hepburn grappling for about thirty years with the question of female emancipation. That’s too long. After a while we got to feeling we were getting crow’s-feet round our eyes along with the patient hero (Herbert Marshall) who hung round for a quarter of a century trying to persuade Pamela (Katharine Hepburn) to give up her editorials and come away with him. For, early in life, Pamela had entered the magazine field and given herself up to writing scorching editorials on free woman instead of the usual twaddle about fancy needlework.

No doubt all of this was important, but it wasn’t much fun. Most of us could have got more excitement out of a bit of needlework. The costumes, interiors, etc., are fine, and the picture works up to a bit of drama at the end. But most of the time

“A Woman Rebels” seemed a long sad struggle, not only for the people on the screen but for those in the audience.

nrilE OPENING sequences of “The -*■ Devil Doll” borrow heavily from “The Count of Monte Cristo.” It’s about an innocent man (Lionel Barrymore) who is sent to prison by three wicked bankers, and escapes to avenge himself on his enemies. He makes his break along with one of those mad scientists who are such a help in the movies. The scientist, it seems, has discovered a drug which will reduce human beings to the size of dolls, at the same time depriving them of all will-power. He dies, leaving his secret and his laboratory supplies to Mr. Barrymore, who is now in a fine position to make things uncomfortable for his enemies.

The weakness of “The Devil Doll” is that it never really fools the audience, in spite of its fine trick photography. People, even people as simple as the banker’s wife in the picture, don’t buy devil dolls for their little girls without investigating them. And all that Mr. Barrymore’s disguise—white wig, shawl and earrings—did for him was to make him more strikingly like Mr. Barrymore than ever. Maureen O’Sullivan and Frank Lawton are the young people involved.

VW"I IATEVER MAY be said against * * the star system in the movies, it does make for lively entertainment. “Libeled Lady” has four stars—Myrna Loy, William Powell, Jean Harlow and Spencer Tracy—together with a story that permits them all to shine at their brightest without allowing any of them to outshine the rest. Myrna IJDV is the libelled lady, an heiress who brings suit against a newspaper

editor (Spencer Tracy). He replies by arranging a counter-suit, with the aid of his fiancée (Jean Harlow) and a blackmail artist (William Powell). The plot, which cheerfully goes to any length, involves Mr. Powell marrying, first Miss Harlow, then Miss Loy.

It’s a complicated story, but the four stars keep it moving so briskly that it seems to make sense most of the time; or at any rate, very good nonsense. It’s full of bright lines and funny situations, and sends you out happy and refreshed, though maybe not very clear in the head.

The Charge Of The Light Brigade.—A big, thunderous and completely unhistorical account of the famous Charge. With a climax which, next to the San Francisco earthquake, is the season’s most spectacular wind-up. With Errol Flynn, Olivia de Havilland. Since the picture is both brutal and unauthentic, it can’t be recommended for children.

The Devil Is A Sissy.—Story of three problem-boys (Mickey Rooney, Jackie Cooper, Freddie Bartholomew) in the New York tenement district. Vivid, moving and finely acted. Recommended for everybody.

Valiant Is The Word For Carrie.—Valiant was the word for Carrie, but she could have used more discretion. The early small-town scenes are moving and effective, but the film is unconvincing and loosely put together. With Gladys George.

Ladies In Love.—Loretta Young, Constance Bennett, Janet Gaynor and Simone Simon are the ladies in love. Before the end. they are— with the exception of Mile. Simon — pretty nearly distracted. Feminine audiences will enjoy it.

Old Hutch.—A long, rambling film about a village no-account Wallace Beery) and his rise to prosperity. If you can take your Beery or leave it, better leave it.

East Meets West.—With George Arliss cast as a wily Oriental potentate. Definitely not one of the Arliss masterpieces.

The Gorgeous Hussy.—Joan Crawford as a Washington figure in the days of Andrew Jackson. Joan appears in curls and muslin, but you can’t mistake her. Some good historical scenes, but the picture wanders considerably.

The Big Broadcast Of 1937.—The usual big annual, with most of your radio acquaintances, including Leopold Stokowski, on view. Some of it is very good, some of it very bad.

His Brother’s Wife. — Love and laboratory research in Manhattan and Africa. With Barbara Stanwyck and Robert Taylor. The film has its exciting moments, but it’s hard to feel much sympathy with any of the people involved.

Give Me Your Heart. — Kay Francis, the screen’s best dressed unmarried mother, in some scenes of suffering and triumph. Only 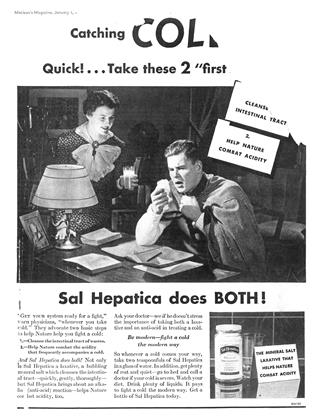