EVERYBODY wept over “Stella Dallas” when it made its initial screen sensation twelve years ago. Everybody, I imagine, will weep over the present version. It's the sort of screen drama that can’t go wrong in any period, since its story of mother love and sacrifice is as true for one generation as another.

In case your film memories don’t go back a dozen years, this is the story of the mother who couldn’t be a lady, but who was determined that her daughter should be one, even when it meant the anguish ^f final separation. There’s more than a touch of snobbery in the story, both in this and the original version; a tendency to suggest that the finer things of life are represented by nice interiors, well-trained domestic service and a restrained use of cosmetics. But the central element— Stella’s love, and the real conflict in the mind of the child who is divided between loyalty to her mother and her own inherited “nice” instincts—is genuine and moving.

Barbara Stanwyck, always at home in a part that calls for tough yet tender handling, is excellent as Stella, and Ann Shirley is surprisingly good as the daughter, Laurel. It seemed to me that Stella’s vulgarity, especially in the matter of dress, was rather heavily exaggerated. Apart from this the picture is handled with honesty, restraint and feeling.

THIS IS a more or less routine underworld melodrama, distinguished chiefly by the smoothly intelligent performance of Douglas Fairbanks, Jr. He’s a cat-burglar, the heroine is a professional gold-digger, and they meet and love when she interrupts him opening her wall safe. Presently they decide on respectability, with marriage as a first step, and after that there are all the usual difficulties that beset young lovers with complicated pasts and no references. The plot is not exceptional, but Raoul Walsh’s direction is brisk and resourceful, and the Fairbanks acting carries the story forward convincingly even in the more implausible sequences.

DARK JOURNEY” is another espionage picture of the Great War. The setting this time is Stockholm, where intelligence services of warring powers met to outwit each other and the neutral government. The heroine (Vivien Leigh) is a modiste, whose buying expeditions are really espionage forages— her imported models carry code messages worked out in chenille dot trimmings.

The plot is ingenious, but unfortunately so complicated that for a good deal of the time the audience is almost as baffled as the governments involved—you really

need a map and colored pins to work it out. Conrad Veidt is the hero, an interned German count who is, naturally, the head of the German intelligence service. Things work out happily for the principals in the end. You may feel that foreigners as mysterious and as extensively travelled as these two would be interned at sight by any sensible neutral government, and that beautiful susceptible young girls aren’t ouite the ones to be trusted with their country’s fate in war time. However, screen espionage is rarely convincing, and the present example is at any rate good romantic melodrama.

The Life of Emile Zola

TF ANYONE had any doubt about it, “Zola” should prove that Paul Muni is one of the greatest screen actors of the present time. His performance in his latest picture is even more brilliant than in “The Good Earth,” more moving and persuasive than in “Pasteur.” Emile Zola, as a man even more than as an artist, is one of the great figures of the past ; and this picture takes his combined achievements as writer and as champion of justice, integrates them into a film of extraordinary intensity and power. Zola’s rise from poverty to affluence and ¡lower is shown here simply as a prelude to the culminating drama of his lifehis voluntary surrender of everything he had achieved, to defend the innocence of Dreyfus. Without Dreyfus, Zola’s life would have been simply the accepted success story of a gifted man of letters.

Fortunately for the present story, Zola had his Dreyfus and Warner Brothers had Paul Muni. The result is a screen biography so compelling and so close to the life of its subject, that watching it is almost like watching the original splendid drama unfold. Joseph Schildkraut’s fine study of Dreyfus supports the Muni performance without at any time conflicting with it. This is Paul Muni’s picture, and the greatest he has ever made.

TOPPER” is a brightly handled little comedy about a pair of high-spirited ghosts (Constance Bennett and Cary Grant) who decide to improve their position in the next world by giving a henpecked banker (Roland Young) a chance in this one. The banker is startled at first, but soon discovers that spirits, both of the disembodied and alcoholic sort, are lots more fun than bank statistics.

On the whole, it’s a family film. Children may not understand why Mrs. Topper (Billie Burke) is so much upset at discovering the spirit heroine’s step-ins in Topper’s pocket. But they’ll enjoy watching the step-ins prance about bv themselves. There’s enough camera fantasy in “Topper” to keep the youngest awake and the oldest amused.

1 I 'HAT operating scene, with its gauze masks, antisepsis, and nurses slapping instruments into the surgeon’s hand as though they were mad at him, is with us again. In fact “Between Two Women” is just one long operating scene, with short intervals to allow the nurses to boil up their instruments and the operating surgeon (Franchot Tone) to go out into the world and discover that surgeons should never marry out of their profession.

Most of the cast are members of the hospital staff, and any who aren’t are patients. Virginia Bruce, the spoiled heiress who persuades the hero to give up surgery for matrimony, is a patient twice. Moviegoers who are fascinated by hospital routine may enjoy “Between Two Women.” Others will find it just routine. 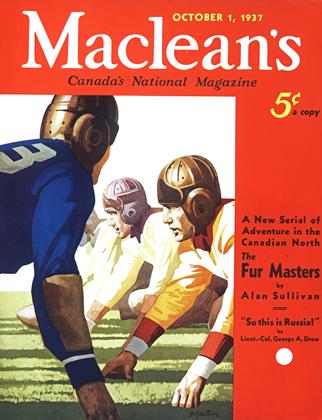