Royal Commissions Have Often Proved Invaluable To The British Government

THE INVALUABLE work done by Royal Commissions is commented upon in the New York Times Magazine in the following terms:

Royal commissions of enquiry, though they may seem very slow-moving and deliberate, though years may elapse before their conclusions materialize in the form of official policy, though in some cases nothing much comes of their exhaustive studies unless public opinion or rebellion forces action, have played a notable role in British legislative history.

They have paved the way for striking departures in the government of the Empire and in the domestic administration of the United Kingdom. They have passed considered judgment, supported by neatly and fulsomely documented texts, upon remote territories of which the average Englishman has hardly heard, and upon questions directly affecting his daily life and his household budget. They have helped keep the Empire together by remaking its Constitution. They have sketched out the solution of many an economic riddle—banking policy, coal mines management, export expansion, unemployment—and thus turned the light of expert collective intelligence upon the process of constant social readjustment which so long has saved Britain from revolution.

That skilful conciliation which has enabled the British to deal so successfully with Oriental subjects, and the timely concessions which have enabled them to avoid violent upheavals at home even in

periods of depression and social ferment elsewhere, reveal a capacity for broadminded vision, for objective examination of opposing views, for a combination of authority with resilience and flexibility, of which the judicial royal commission is a characteristic embodiment.

In the British Empire nothing is fixed or absolute, no forms of government are definitive, no policies exempt from criticism. Conditions change and the Empire changes with them. This is the secret of its strength. The imperial power, by whomever exercised, has the air of being always ready to listen to the plaints of its humblest subject or of the remotest tribe under its rule; and if the disgruntled make enough fuss, a royal commission or some similar agency of the King will come to hear their woes and duly advise the government what should be done to remove them.

Royal commissions, which come and go —though one or two are nearly always at work somewhere—form a kind of special research branch of the State in which the best available talent is enlisted, without pay, to keep the sovereign and his ministers informed regarding needed changes in the mechanism of the, Constitution. Like the chemical and physical laboratories maintained by great industrial concerns, where experts constantly try out new methods and devices, the royal commissions are testing places for new ideas and scholarly workshops in which new instruments of government are forged for about one fourth of the population of the earth.

They prepare the ground for administrative or legislative action by assembling and analyzing the facts from all sources and sides, and formulating their conclusions. They study the problems submitted to them on a scale that would be impossible for Cabinet Ministers or Members of Parliament or even the highly specialized civil servants. They do the intellectual digging and grubbing that is necessary to enlighten law-makers and public regarding complicated and technical issues.

For a century government and Parliament have relied increasingly upon the skilled guidance of royal commissions. For they perform a double function. They supply the legislators with reliable information and advice, and they take upon their shoulders a share of the responsibility for public policy. The Member of Parliament can defend his vote by pointing to the judgment of a royal commission. A cautious Cabinet shying at decisions on controversial topics can pass the buck to a royal commission, whose nonpartisan backing sometimes brings welcome relief to harassed Ministers.

A royal commission, so called because it is appointed by the Crown on the advice of the government, may be composed of six to a dozen or more distinguished citizens. Some are chosen for their expert knowledge some as able laymen whose experience and judgment inspire confidence, some may be representative of diverse views and interests—as when labor men and industrialists are named on a commission to study economic questions. But the partisans are in a minority; most members are outside Parliament and the official parties and groups; every effort is made to ensure that the enquiry will be impartial, authoritative and scholarly.

Official and other documents are sent for and witnesses representing all opinions are heard. (Unless specifically empowered by Parliament to do so, a commission cannot compel the submission of documents or the giving of evidence.) The facts and views are then examined and discussed, and the testimony is published in bulky volumes. After months, often a year or two, a report emerges in the form of a Blue Book.

This Blue Book will not become a best seller or compete with the penny press, which numbers its circulation in millions. It will remain almost unknown to the mass of the public. But it will be studied by editors who write for the millions, by some members of the government, by the more studious Members of Parliament. 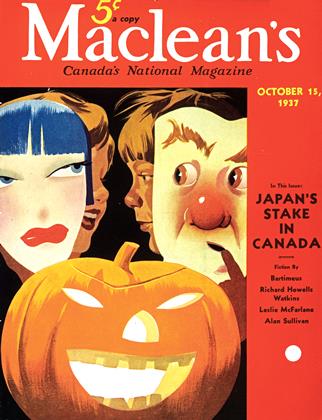