CONQUEST” has all the magnificence you might expect of a film that combines the life of Napoleon, the art of Garbo, and the fabulous production resources of Metro-GoldwynMayer. This is historical pageantry on the de Mille scale, with the difference that here the brilliant panoply of the period keeps to its place as background. The court balls, the costumes, the martial reviews, the glitter and pomp of the Napoleonic era, lavish and authentic as they are, are never more than a setting for the lovers. As Madame Walewska, the woman who loved Napoleon faithfully through triumph and exile, Garbo is beautiful and moving as ever, though still a little wan, as though she hadn’t quite recovered from her celebrated illness in “Camille.”

The most remarkable feature of "Conquest,” however, is the performance of Charles Boyer as Napoleon. For once. Garbo has a leading man with something more to contribute than a beautiful profile and a talent for love-making. Charles Boyer not only looks like Napoleon but acts and apparently feels as the Emperor must have acted and felt. Napoleon here is a Man of Destiny as well as a man of affairs; and not one, it is made clear, to let his affairs interfere with his destiny. It is no reflection on Greta Garbo’s fine performance to say that Charles Boyer’s acting makes “Conquest” a top-ranking Garbo film. This is one of the year's most important pictures and shouldn’t be missed.

'“THE REMARKABLE thing about “Farewell Again” is that, built on the tricky Grand Hotel plan, it emerges as a faithful and penetrating study of the English spirit. You can’t see this picture without realizing as never before how English people feel about England, about the Empire, about themselves and each other.

The story of a troopship bound for England after five years naval patrol in the East, “Farewell Again” has at least twenty major characters, half of them on land, half on sea. By a triumph of direction, Erich Pommer has kept all these lives and destinies separated yet related. In less skilful hands “Farewell Again” might have seemed "spotty” in direction and confused in its final effect. Director Pommer, however. has kept it even in texture, brilliantly staccato in movement.

The cast, headed by Leslie Banks and Flora Robson as the colonel and his wife, is exceptionally and consistently fine. "Farewell Again” has more to say than a hundred imperialist editorials, and is dramatically moving besides. Whether or not

you agree with it as an editorial, you can’t possibly quarrel with it as entertainment.

rT'HIS PICTURE is a lively mixture of musical show, political satire, specialty numbers, Gordon and Revel tunes, and Eddie Cantor. Here Eddie dreams himself into Bagdad, 900 A. D., where he persuades the Sultan (Roland Young) to run for President on a New Deal basis. As might be expected, jx>litics and Eddie make uncomfortable bedfellows. Eventually he gets into trouble and has to be rescued by a magic carpet which floats off to heaven at the utterance of the word “inflation.”

As a musical show, “Ali Baba Goes to Town” is lavish, tuneful and handsomely produced. As a political satire, it’s lighthearted and easygoing. The producers have taken care that nobody gets his feelings hurt, and that no one is sent away with any constructive ideas. If you’re tired of political problems there’s no better place to forget them than at “Ali Baba Goes to Town.”

TROUBLE WEDDING” brings back the popular William Powell and Myrna Loy in a film version of a Ferenc Molnar comedy roughly translated into the American language. It isn’t just the translation that is rough in this film, however. Before the picture is over Myrna Loy smacks Edgar Kennedy’s face, John Beal knocks out William Powell, Mr. Kennedy tweaks Miss Loy’s nose. Miss Loy, returning to the attack, knocks out William Powell, just returning to consciousness. Then Donald Meek, coming to Miss Loy’s rescue, inadvertently hits her in the jaw and she is laid unconscious beside Mr. Powell, who has just been knocked insensible for the third time. Earlier in the story Miss Loy hangs a portrait around Mr. Powell’s neck and he responds by literally kicking her out the door.

Not all of the picture of course is as

lively as this, but on the whole it’s pretty rough-and-tumble. It’s to be hoped that Mr. Powell and Miss Loy, after a good rest and a thorough rubbing with arnica, will return to the smoother form of comedy which is after all their particular line.

f I ’HE AWFUL TRUTH” is a wonder-*■ fully smooth blend of lively acting, bright dialogue, witty direction and hearty slapstick. The hero and heroine (Cary Grant and Irene Dunne) are an unconventional married pair, the sort of skittish young people whose antics are so popular at present on the screen, and who would probably make perfectly terrible upstairs neighbors. Divorcing each other shortly after the story opens, they immediately busy themselves at breaking up each other’s incipient love affairs. Complications include the custody of Mr. Smith (a talented wire-haired terrier), the heroine’s interim engagement to an amorous cowboy (Ralph Bellamy), the hero’s near marriage into a Park Avenue family. After each has successfully wrecked the prospects of the other, the two engage in a last-minute reconciliation which turns into a camera finish race with the decree nisi.

The comedy clicks off in a series of brilliantly timed sequences, very much as though Director Leo McCarey had wound it up tight, then let it run itself down, supplying an extra turn or two at the end for a lively windup. Thanks to brisk pace, ingenious directing and the comedy talents of Irene Dunne, “The Awful Truth” is one of the season’s most entertaining adult pictures.

CONFESSION,” starring Kay Francis, runs for almost half its length before it allows the star herself to make her appearance. When the story does get round to her, it introduces her as a hoarse cabaret entertainer in a blond wig and a flashy Diamond Lil ensemble—a disguise which makes the screen’s stateliest brun-

ette practically unrecognizable. Shortly after this she shoots a concert pianist and in the ensuing murder trial the picture— using the old-fashioned cutback device— reconstructs her story. It’s the usual Kay Francis story from this point on.

On the whole, however, it isn’t one of Miss Francis’ meist arresting films. If the role of the unhappy Russian opera star in “Confession” is intended as a consolation prize to the star for losing the Grand Duchess Tatiana part in “Tovarich,” I’m afraid it won’t do much to take her mind off her grievance.

The Bride Wore Red.—How Cinderella •vent after money and a yacht, and had to be content with love and a donkey cart. Joan Crawford, Franchot Tone and Robert Voung are the principals. For Crawford fans.

Wife, Doctor and Nurse.—Loretta Young (the wife), Warner Baxter (the doctor) and Virginia Bruce ithe nurse) in the usual predicament, with a modern solution. Entertaining.

Heidi.—Film version of the childhood classic, made into a better than usual Shirley Temple film. For Temple fans.

Life Begins at College.—The Ritz Brothers put major lunacy on the curriculum. Funny while the brothers are present, which is most of the time. Young people will enjoy it.

Victoria the Great.—Victoria from her ascension to her Diamond Jubilee. A magnificent English film, beautifully played • by Anna Neagle and Anton Walbrook. For the

Life of Emile Zola.—Zola and the Dreyfus case. Paul Muni’s fine performance makes this one of the year’s most distinguished films.

The Prisoner of Zenda.—The popular Anthony Hope romance, brought to the screen by David O. Selznick and acted in the grand manner by Ronald Colman, Madeleine Carroll and Douglas Fairbanks, Jr. Lavish and entertaining. A family film.

High, Wide and Handsome.—Irene Dunne and Randolph Scott in a highly popular account of the development of the Pennsylvania oil fields. Preposterous but entertaining.

Dead End.—The Broadway success brought to Hollywood, along with the six original juveniles. With Sylvia Sidney and Joel McCrea. Highly recommended, but not for children.

100 Men and a Girl.—Conductor Leopold Stokowski and Prodigy Deanna Durbin collaborate in an unusually fine picture. For the family.

Forget-me-not. — Beniamino Gigli in a wonderful repertoire of Italian opera. There’s a story goes with it which is pleasantly told and doesn’t interfere too much with Signor Gigli’s singing. Recommended.

Vogues of 1938.—Clothes and romance. The world’s most photographed girls model the clothes, while Joan Bennett and Warner Baxter take care of the romance. For feminine movie-goers chiefly. 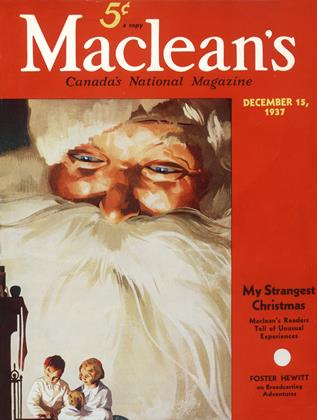