The Garden of Allah

AS THOUGH Marlene Dietrich weren’t beautiful enough for anybody in sepia, they have turned her out now in technicolor. And as though she hadn’t suffered enough in the past, she has been given "The Garden of Allah,” the tearfullest drama of all time, to star in. The result is a picture which will probably supply Dietrich admirers with everything they could ask for. The story, familiar to most middle-aged novel readers, is about a Trappist monk, who breaks his vows and runs away from his monastery ; and how he meets an unhappy heiress, and they marry and have a short interval of happiness in the Sahara Desert. The honeymoon, however, is interrupted by the voice of conscience, which sends the hero back to his cell and leaves the heroine desolate.

It isn’t the cheerfullest story in the world nor the most breath-taking—somehow a struggle with conscience isn’t the kind of action that screens most excitingly. But it has moments of lavish beauty, both the African scenery and Miss Dietrich lending themselves to the technicolor process with high pictorial effect. Charles Boyer, as the hero, suffers with eloquence and style.

EVERY TIME anyone opened a door in “Mad Holiday” it was to find a corpse laid out like a surprise hamper on the threshold. It’s one of those murder mysteries that seem to be put together on the theory that if you confuse your audience sufficiently they won’t notice the absence of a plot. With the exception of a plot, however, nothing seems to have been omitted. There are the usual Chinese suspects after the usual fabulous diamond ; there is the indispensable Ted Healy making the usual wisecracks; there is even the familiar official statement given out after the third or fourth murder, "This is no ordinary killer.” Edmund Lowe as a screen sleuth and Elissa Landi as a mystery writer are the principals, and I’m afraid this film won’t add anything to the reputation of either.

IF YOU like highly organized musical comedy—big sets, big numbers, big talent, etc., all pyramided on an inconsequential plot, you will like “Born to

Dance.” Eleanor Powell, first tap danseuse of America, has the lead, and the producers have kept in mind that her talent is dancing and have given her lots to do. As an actress, she is not perhaps as gifted as she might be. Fortunately, however, the narrative isn’t important, and James Stewart, Una Merkel, Sid Silvers, Virginia Bruce and other experts carry it along nicely.

On the whole, “Born to Dance” is in the top flight of musical shows, the comedy is funnier than usual, the music better, the stepping faster. Cast and chorus are handsomely turned out and the spectacle numbers are built up with smiting effect. It’s one of those big generous shows, in fact, where everyone works tirelessly and invents endlessly in order that you may relax and do nothing but enjoy yourself.

Love on the Run

an heiress as usual, decides to give her noble fiancé a run for her money and flies to Europe with a newspaperman (Clark Gable) in a plane borrowed from an international spy (Reginald Owen). The elements are all familiar, not to say hokum, but the charm of “Love on the Run” is the speed and ingenuity with which they have been fitted into a brand-new pattern.

As the heiress, Miss Crawford is both beautiful and spry, and naturally takes up a great deal of the picture. However, Clark Gable has plenty to do, his initial exploit being to take off with a girl he has barely met in a plane with which he hasn’t even scraped acquaintance. This and the sequences in the Fontainebleau Palace are the liveliest episodes in a picture unusually rich in comedy situations. It’s a continuously bright and exciting film, and goes to

show that Director Van Dyke can make a gay and zestful concoction out of the leftovers another director might have thrown away.

T-TATS OFF to Mary Pickford and Jesse Lasky for producing a picture about an opera star with a new and funny plot; and hats off again for a film about Mexico that is something more than a picture postcard sequence or a serape-and-sombrero parade. Nino Martini is the opera star, and he is discovered not by an impresario but by a bandit chief (Leo Carrillo) who, instead of making him a gift to the world, carries him off to the cactus country where he can have him all to himself.

“The Gay Desperado” is a bright and ingenious parody on both operatic and gangster films. Pretty Ida Lupino is the heroine and she and Mr. Martini w’ork together nicely, but the best parts of the film are the scenes dominated by the bandit chief and his morose lieutenants. Rouben Mamoulian, who doesn’t as a rule go in for nonsense, directed the picture, and seems on the whole to have had a better time with it than with some of his more impressive films.

YYTEDDING PRESENT” is a news* * paper picture, which to old moviegoers tells most of the story. Joan Bennett is the front-page girl this time, and her coworker is Cary Grant. Together they follow fire engines, risk their necks for their calling, and tell the city editor where he gets off. The two are up to all sorts of tricks, such as mailing hundreds of room keys to the city editor, and calling up the owner to tell him it’s the President of the

United States and then hanging up. . . In fact, if such a pair of jiests as these two actually appeared on the front page of a real newspaper, it would probably be because someone, having been tried too far, had shoved them on the roller presses in time for the late edition.

After a while the heroine quarrels with the hero and gets engaged to a humorless author; whereupon her ex-sweetheart makes her a wedding present of all the ambulances, fire engines, black marias and undertakers’ cars within telephone call. It’s great to have a sense of humor.

Tarzan Escapes. — The Tarzans (Johnny Weissmuller, Maureen O’Sullivan) in difficulty again. You might as well take the children to see it, as you’ll have to eventually.

Three Men On A Horse. — The stage play transferred to the screen almost line for fine. With Frank McHugh, Joan Blondell. Very funny.

Reunion.—The country doctor (Jean Hersholt) and some of his cases, including the Dionne quintuplets. Not as good as it might be.

Come And Get It. — Edna Ferber’s novel about early Wisconsin, in a fine screen adaptation. With Edward Arnold, Frances Farmer and Joel McCrea. Go and see it.

The Longest Night.—Murder in a departmental store and quite lively. With Robert Young and Florence Rice.

Song Of Freedom.—Paul Robeson as a dock laborer who goes back to Africa to be king of his tribe and meets some unpleasant disappointments. Mr. Robeson sings superbly, but the picture is slow and unconvincing.

Go West, Young Man.—Screen version of “Personal Appearance” rewritten by Mae West to bring it up to her standards. With Mae in the leading rôle. Fair entertainment.

Theodora Goes Wild.—The sister act to “Mr. Deeds Goes To Town.” Demure Irene Dunne is the heroine and her antics will surprise you. Lively entertainment.

A Woman Rebels.—A staid and serious tract on female emancipation. With Katharine Hepburn. Miss Hepburn doesn’t get much fun out of her rôle and neither does her public.

The Devil Is A Sissy.—Jackie Cooper, Mickey Rooney and Freddie Bartholomew as juvenile court cases. The setting is New York and the story is handled with power and feeling. A family film and recommended.

The Gorgeous Hussy.—From Pot-House Peg to political hostess in the days of Andrew Jackson. A historical sketch featuring Joan Crawford. The picture is loosely put together but interesting.

East Meets West.—George Arliss as an Oriental potentate in a turban and fitted tunic. Not an Arliss masterpiece. 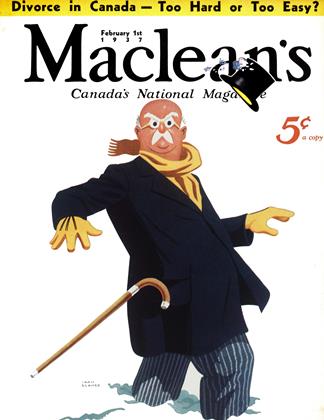