DEANA DURBIN, singing sensation of Eddie Cantor’s Sunday night hour, will probably make a lively impression on the motionpicture public in her first screen appearance, “Three Smart Girls.” “She has the screen presence of a Garbo and the voice of a Grace Moore,” says Hollywood’s Louella Parsons—which seems to be overstating things a little. Actually the new star is young and pretty, with exceptional ability; a coloratura soprano remarkable for her years. She still has child-actress appeal, with lots of grown-up talent to fall back on, so we should .see a good deal of her in the future.

Nan Grey and Barbara Read are the other smart girls, and their business in the story is to disentangle their daddy (Charles Winninger) from the snares of a blonde (Binnie Barnes) and restore the bioken family circle. It takes quite a while and a lot of coloratura solo work from little Miss Durbin to straighten out the domestic affairs, but everything turns out happily in the end. The best performance in the picture, if your preference is for grown-up acting, is given by that talented comedian, Mischa Auer. “Three Smart Girls” is a family film in every sense of the word.

IET’S MAKE A MILLION” brings J back the Pixilated Sisters of “Mr. Deeds Goes to Town.” along with Edward Everett Horton as their highly pixilated nephew. He is a nervous, respectable businessman who innocently involves his fellow' towmsmen in a large-scaie oil swindle. You don’t need any sixth sense in these matters to know that just as he is about to be ridden out of towm on a rail the hero really strikes oil, and reclaims the respect and affection of his fellow citizens. As usual, the Right Girl is beside him through thick and thin; and as usual Mr. Horton from first to last is beside himself. “Let’s Make a Million” won’t astonish you at any point, but it’s pleasant, easygoing entertainment.

CHILDREN, who according to the surveys always give theii vote to Westerns, will probably find “The Plainsman” the best picture of the year. Certainly they w'on’t come across any Western to exceed it. for it is a de Mille film and follows closely the de Mille success formula

land on your re-extended legs, soak up the shock with the knees by sinking into a modified Telemark position, from which you will bounce back to normal running posture.

The best way to learn the Gelandesprung is to make a small hole or a couple of marks in the snow of the smooth practice slope, to represent imaginary obstacles. Run down and leap over them and criticize your ski tracks. They will show w'here you left the ground and where you landed, and how well you would have cleared the log. As you get the hang of the thing, proceed to tackle simple but actual obstacles and build up your nerve.

The Gelandesprung is not just a trick. It is a safeguard against the unexpected and unavoidable in a cross-country run.

THIS MANOEUVRE is one of the most useful in skiing. It is not only practicable on ordinary types of snow, but the

—crowds, climaxes and cavalry charges. There is romance in it of course, usually the low point of interest for youthful audiences, but the heroine in the case (Jean Arthur) doesn’t in any sense of the word clutter up the action with skirts. She is a stage-coach driver, bold, blonde, beautiful, and hoarsely amorous.

Gary (Mr. Deeds) Cooper is the star, a two-gun hero who sets himself the task of stopping the gun-running traffic with the Indians on the frontier; which involves him in lots of trouble with palefaces and redskins alike. If action is what you crave, here it is, two continuous hours of it. Adults who take exception to violence may not entirely approve of it. But the youngsters will shout themselves hoarse as crows.

T_TERE COMES CARTER” is about an ^ embittered Hollywood press agent (Ross Alexander) who decides to air his grievances in a regular commercial broadcast. This gets him into difficulties presently with his fiancee (Anne Nagel), a nice girl who believes there are things even a columnist should keep to himself. In spite of this he continues to work off his personal dislikes every evening over a national network, until he is finally beaten up by his tougher opponents and sent to hospital. The picture ends with the conviction of gangsters and the hero’s decision to return to private life and allow his victims to return to theirs.

It’s a fairly lively picture, but it isn’t a pleasant one. And it adds a sombre touch that the news of Ross Alexander’s suicide appeared in the press at almost the same time as the picture’s release. Better leave the children at home.

WINTERSET,” unofficially voted the Pulitzer Prize Play of 1936, has been given a beautiful screen translation by

Radio Pictures, with the original actors, Burgess Meredith and Margo, in the leading roles. In producing this film Radio Pictures have made a fine and richly deserving experiment in giving the movie public the very best the stage has to offer. The material of “Winterset” is gangster material, but the actual theme is justice in a high poetic sense. It is the story of a crime and its effect over a long period of years on the son of the man unjustly executed, on the judge who passed the sentence, and on the gill whose lover and brother are both involved in the tragedy.

Quite apart from the picture itself, “Winterset” is a beautiful and searching piece of writing; while from the point of view of acting and dramatic tieatment, it certainly is one of the most distinguished pictures of the year. Because of the elements of horror, violence and insane crime that are necessary to the story, “Winterset” is not a picture for children. But it represents a unique experience in the movies which adults shouldn’t miss.

INSURANCE, even big-time insurance, doesn’t sound like very promising film material, but it’s surprising how well it works out under the master hand of Darryl Zanuck. The business side of Lloyd’s isn’t neglected but love comes into it as well, with Madeleine Carroll as an English peeress in a tiara, and Freddie Bartholomew who grows up and turns into Tyrone Power, Jr., the savior of England.

It’s lavish and costly and—except in the actual facts—authentic; you get the feeling that it’s sounder on Chippendale furniture than on the naval policy of the period. Sticklers may take exception to the implication that the Battle of Trafalgar was really won in Lloyd’s London office; but movie-goers will be willing to overlook it for the sake of the ingeniously dramatic climax. It borrows heavily from “The House of Rothschild,” and in the early

sequences from “Treasure Island” and “David Copperfield.” However, give-andtake is a convention we have to allow for in the movies.

Love On The Run.—Joan Crawford, Clark Gable and Franchot Tone in a flighty but entertaining piece about love, riches, newspapers and spies. Lively and fast.

The Gay Desperado.—Comedy about bandit life in Mexico which won Rouben Mamoulian the award for the best directorial work in 1936. With Nino Martini, Ida Lupino. Highly recommended.

The Garden Of Allah.—Desert romance in technicolor between Marlene Dietrich and Charles Boyer. The plot is old-fashioned and involves a lot of suffering for the principals; but the technicolor is very becoming to both Miss Dietrich and the desert, and the suffering seems to become Mr. Boyer. Worth seeing.

Tarzan Escapes. — Mr. and Mrs. Tarzan (Johnny Weissmuller, Maureen O’Sullivan) in another brush with civilization. Very picturesque, very well photographed and very silly on the grand scale. For children of all ages.

Song Of Freedom.—Paul Robeson as an English negro dock worker who returns to his own people and finds tribal life much overrated. Mr. Robeson sings magnificently, as usual, but the story is weak.

Reunion.—Jean Hersholt back in Callander and busier than a mother robin with all his babies, including, of course, the quintuplets. The plot is strained, but the quints are as spontaneous as ever.

Three Men On A Horse.—Predicament of a genius whose business was writing greeting cards and whose hobby was picking horses. A faithful and very funny screen version of the comedy success that has had a long run on Broadway. With Frank McHugh and Joan Blondell. Recommended.

Come And Get It. — Edna Ferber’s novel about lumbering in Wisconsin, finely screened, with a superb performance by Edward Arnold. Recommended.

A Woman Rebels.—Katharine Hepburn, as a pre-Pankhurst feminist, combines considerable romantic experience with a great deal of decorum. A discussion of female emancipation which doesn’t succeed in making it seem a matter of pressing importance. With Herbert Marshall.

Theodora Goes Wild. — Irene Dunne as a small-town lady novelist who gets tired of the proprieties. It’s lively and gay, and the antics of the hithertodemure Miss Dunne will surprise and delight you. With Melvyn Douglas. Recommended.

Mad Holiday. — Edmund Lowe as a film sleuth, Elissa Landi as a novelist, in one of those murder mysteries where you can’t see the plot for the casualties. Zasu Pitts and Ted Healy supply the comedy, which helps. 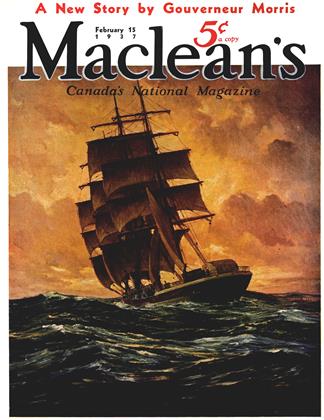