“Rembrandt” doesn’t follow the usual lines of screen biography; it isn’t, for instance, as breath-taking as “The Life of Louis Pasteur,” which built actual facts into a new and exciting pattern. Here the producer has taken the facts pretty much as he found them, and as a result the excitement in the picture is largely in the performance of Charles Laughton, who gives the film fire, intensity and meaning, and altogether saves it from being merely a classroom exercise in the lives of the great. High-strung people who like suspense and action and are fretted by characters who move slowly and think deeply, may get a little restless before “Rembrandt” is over. But if you are interested in the study of a great man by a great actor, this is a picture to see.

VUARNER BROTHERS’ annual wonW der-show is back, a little less showy than usual but much funnier. It’s about the insurance business, and also, of course, the show business, and is full of surprise and suspense, life insurance behind the scenes apparently being almost as full of turmoil as life backstage. The plot concerns a theatrical producer whose partners persuade him into taking out a milliondollar policy, then lure him into draughts and push him into swimming pools in the hope of inducing pneumonia. It’s a violently simple idea, but, thanks to Victor Moore and Osgood Perkins, it’s unusually funny.

Dick Powell and Joan Blondell are both present, and though Dick shows signs of settling down, Joan bounces about more lively than ever. The picture opens rather slowly but climbs like a skyrocket toward the end, bursting finally into a vast Busby Berkeley spectacle, with a skyful of beautiful girls in old-fashioned rocking chairs. It’s crazily lavish and lavishly absurd; on the whole, the best “Gold Diggers” in some time.

After the Thin Man

J\ FTER THE THIN MAN” is a pains** taking tracing from the original William Powell, Myrna Loy success. In

fact it follows “The Thin Man” so closely that you almost feel you are seeing the original all over; and rather wish you were. Nick and Nora (William Powell and Myrna Loy) are back, doing and occasionally saying much the same things. Along with them of course is Asta the dog, who has been working hard on his screen career, and promises to be one of our leading comedians.

There is another of those wildly assorted parties at which everybody gets up and does his specialty act and nobody pays any attention to anybody else; and finally there is the mystery with a trick ending which the author, Dashiell Hammett, keeps up his sleeve till the last possible moment. If you want the minor explanations they are still, I’m afraid, up Mr. Hammett’s sleeve. “After the Thin Man” hasn’t quite the spontaneity and charm of the original, but it’s good mysterycomedy, the dialogue bright, the handling expert, and the principals as ingratiating as ever.

One in a Million

ONE IN A MILLION” is devoted mostly to Sonja Henie, world champion ice skater, and for this reason alone is a great credit to its producers. Watching Miss Henie skate away with the picture, one wonders how the talent scouts overlooked her so long. For she is charming to look at, with a pretty figure, a gay face and an ingratiating manner. In fact she would have been quite worth the trouble of importing, even if she were not the greatest fancy skater in the world.

The story follows approximately her own career, using as the natural climax the newsreel records of her triumph last year at the Olympic Games. Adolphe Menjou, Ned Sparks and Don Ameche assist acceptably at filling in the story, and the Ritz Brothers contribute their own peculiar madness. But the picture is Sonja

Henie’s—for the most part a beautiful ballet on skates, at its height one of the loveliest and most exciting spectacles the screen has to offer. “One in a Million” was probably the very best title Hollywood could think up for Miss Henie. But it’s a low estimate.

TH OR THOSE of us who knew it when, “Broken Blossoms” was a picture to remember. It was one of the best of the silents, and now it has been revived with sound and fury and with all the emphasis placed squarely on its more brutal aspects. “Broken Blossoms” in its present version ranks, I should think, as the Year’s Ugliest Picture. It is the story of an unfortunate slum child (Dolly Haas) who, beaten and tortured by a brutal father takes refuge with a gentle Chinese Buddhist (Emlyn Williams). It’s an East Meets West theme, designed to set up a contrast between the subtlety and magnanimity of the Orient and the brutal savagery of the Occident. But it very soon gets down to cases, and devotes itself exclusively to scaring poor little Miss Haas out of her wits.

Very young children taken to see this picture could very easily be as badly upset by it as Dolly Haas seems to have been. From the child-welfare point of view, in fact, “Broken Blossoms” is in much the same class as exposure to whooping cough.

The Man Who Lived Twice

rT'HE MAN WHO LIVED TWICE” is one of those Jekyll and Hyde pictures which, by speeding up action and hurrying over detail, manages to be convincing while remaining entirely incredible. It’s about a criminal (Ralph Bellamy) who in flight from the police, drops into a classroom where a distinguished scientist is lecturing on brain surgery as a cure for crime. The

criminal at once has the inspiration of baffling the police by escaping, not into Mexico or Canada, but into the Good Life. The surgeon is persuaded to operate, and in the process straightens the criminal’s nose along with his morals, so that when he comes out of the bandages he is not only completely reformed but exceptionally handsome, a really beautiful job. There’s a lot more to the picture than that of course, and it manages to be, if not quite credible, at least fairly absorbing. It may not be sound sociology, but it’s good melodrama.

Winterset.—A fine screen adaptation of Maxwell Anderson’s stage success about life, love, crime and punishment. Not for children, but adults shouldn’t miss it. With Margo and Burgess Meredith.

Three Smart Girls. — Deanna Durbin, the fourteen-year-old singing marvel, in a little sketch of family life which families will enjoy.

Lloyd’s Of London. — Shipping insurance and the Battle of Trafalgar, both made remarkably exciting. With Madeleine Carroll, Freddie Bartholomew, Tyrone Power. A family film.

The Plainsman.—A Western that has everything; or at any rate, everything a Western should have. With Gary Cooper as Wild Bill Hickok, and Jean Arthur as Calamity Jane.

Love On The Run. — Our old friends the heiress, the reporter and the international spy, in some lively chase sequences. With Joan Crawford, Clark Gable, Franchot Tone. Good entertainment.

The Garden Of Allah.—Love, passion, suffering and technicolor in the Sahara. With Marlene Dietrich, Charles Boyer. Very pic-

Born To Dance.—Excellent dance-and-comedy sequences, with romance to top it off. With Eleanor Powell, James Stewart and dozens of other talented people. Good entertainment.

The Gay Desperado. — Opera, bandits and racketeers, in a fine burlesque of all three. With Nino Martini, Ida Lupino, Leo Carrillo. Recommended.

Tarzan Escapes. — Young people and some adults will have a fine time over the latest crisis in the life of the Tarzans (Johnny Weissmuller, Maureen O’Sullivan). A family film.

Come And Get It. — Edna Ferber’s novel about Wisconsin’s lumbering days, in a fine screen adaptation. With Edward Arnold. Highly recommended.

Three Men On A Horse.—Faithful screen version of the Broadway success about the clairvoyant who mixed greeting cards with horse racing. With Frank McHugh, Joan Blondell. Very funny.

The Devil Is A Sissy.—A moving and finely handled picture about three boys (Jackie Cooper, Mickey Rooney, Freddie Bartholomew) in the New York tenement district. A family film and recommended.

Theodora Goes Wild.—Irene Dunne as a lady novelist who goes to town. Miss Dunne’s antics will surprise and delight you. Recommended. 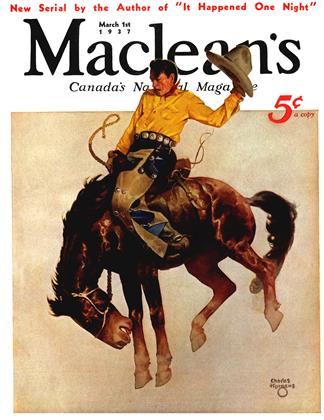