THIS IS Garbo’s picture and a beautiful one. Metro-Goldwyn-Mayer have supplied a handsome production, and a line assisting company, but it is Garbo, fragile but dominant, who gives the picture freshness and power. The part of Marguerite is probably the most famous invalid role of all time. In fact, so many tragediennes have worked over it in the last eighty years that it is all but worn out and entitled to a decline in its own right. Only a very great artist could revive it and give meaning and subtlety to its flamboyant situations.

Garbo indeed is so much better than her role that she is able to lift it to her own heights. Some of the credit of course must go to the producers, who have given the Dumas antique a thorough renovation, and to the assisting actors who play their roles with skill, understanding and restraint. Robert Taylor, as Armand, is handsome and assured and not too completely overshadowed by his Marguerite; but it is Henry Daniell, as the cynical Baron de Varville, who comes nearest to matching Garbo’s artistry. Altogether, "Camille” is a superb picture, skilfully adapted to modern taste and sad enough to make even a movie reviewer cry.

PRODUCERS never seem to get tired of building pictures about the famous Strauss waltz. In fact, it almost looks as though the "Beautiful Blue Danube” were the original “Oid Man River.” However, if you like the waltz-time-in-Vienna type of picture, “Champagne Waltz” should please you. Charming Gladys Swarthout is the heroine, while Fred MacMurray plays the part of Buzzy Bellew, head of an American swing band orchestra. Love comes and departs and comes again, fortunes fail and are recovered, and in the meantime “the Beautiful Blue Danube” keeps right on rolling along.

Miss Swarthout has never looked more attractive or sung more beautifully. Fred MacMurray leads his band, sings a song or two acceptably and plays the saxophone. Velez and Yolanda dance. Jack Oakie consumes cigars. Altogether, nobody’s talents are neglected. If the theme is old, the treatment is original, especially in the final sequences where not only the lovers but the bands are united, the swing and waltz orchestras coming together right before your eyes on merging platforms,

without a beat being missed or a single musician being thrown out of work.

More Than a Secretary

TN THIS PICTURE Jean Arthur dresses up in a tailored suit, owl glasses and a fedora hat, and tries hard to look both competent and a fright —the two usually add up to much the same in the movies. When love comes to her she takes off her glasses and tries to interest her employer, a magazine editor (George Brent), in something besides her shorthand. But he’s an unworldly creature whose idea of giving a girl a good time is to take her out and treat her to a vegetable plate. Besides he’s all wrapped up in his magazine. Body and Brain, and so far as he’s concerned his beautiful secretary is just brain.

There are some fairly amusing sequences in which Lionel Stander puts the magazine staff through its morning drill, but for the most part “More Than a Secretary” is the routine boss-and-stenographer movie with a standard plot and type characters. If you’re interested in types, you’ll get almost as much fun out of just sitting in the lobbv.

Sing Me a Love Song

THANKS TO Hugh Herbert, this is one of the funniest comedies in a long time. It’s also one you might easily overlook, misled by the title and the fact that it hasn’t had much billing. It’s another department-store picture, and Hugh Herbert wanders through it as a millionaire kleptomaniac, picking up such irresistible things as hats, electric toasters and luggage, and hanging wistfully around the piano department. Zasu Pitts, Alan Jenkins and Walter Catlett are also present, Miss Pitts as a demented music clerk, Mr. Jenkins as a bemused elevator boy, and Walter Catlett as a floorwalker with

delusions of grandeur. Patricia Ellis and James Melton are the lovers. The department-store setup is familiar and the story is far from original, but these elements aren’t important. “Sing Me a Love Song” is a comedian’s picture, and the comedians are tops.

BULLDOG Drummond Escapes” seems to have been made chiefly to keep “Sapper’s” hero before the public. The latest bulletin on his career is unimpressive. Ray Milland is the current Captain Drummond, and the Drummond personality has been considerably modified to suit Mr. Milland’s age and talents. In this version he’s a rather flighty youth, inclined to jump at conclusions rather than solutions. The story includes a beautiful girl, imprisoned in a lonely mansion, and there are the usual disappearances, sudden deaths, triumphs and reversals, together with an astonishing amount of headcracking with vases and antique bric-a-brac. The whole thing is hardly more than a tenth carbon copy of the original Drummond.

SPY OF NAPOLEON” brings Richard Barthelmess back to the screen in a rather dull and mediocre historical film. It has to do with events leading up to the Franco-Prussian war (one of them being the cruel separation of Richard Barthelmess and Dolly Haas) and it’s long and complicated and never very convincing. It shows the French political scene swarming with spies and assassins, all anxious to betray their country or kill Napoleon III, and most of them, for some reason, selecting the neighborhood of the chief of police as the ideal spot for a hoarse discussion of their plans. Baroness Orczy wrote the

story, but I’m afraid it was one of her potboilers. The screen version isn’t likely to help greatly in establishing Dolly Haas— and re-establishing Richard Barthelmess —among the stars.

Rembrandt.—Another biographical study in the Lives of the Great. A dignified, informative and beautifully acted picture. With Charles Laughton. Recommended.

One In A Million. — Sonja Henie, world champion figure-skater, is the one in a million and it’s a conservative estimate. Miss Henie looks charming, acts acceptably and skates magnificently. Adolphe Menjou, the Ritz Brothers, Don Ameche and plenty of others assist. But it’s Sonja Henie’s picture.

Gold Diggers Of 1937.—The spectacle side of life insurance and the business side of musical comedy, with lots of climaxes in both departments. With Dick Powell, Joan Blondell, Victor Moore, Osgood Perkins. A better than usual “Gold Diggers.”

After The Thin Man.—The sequel has everything the original had; except perhaps the originality. It’s a carbon copy, but a surprisingly good one. With Myrna Loy, William Powell,

Broken Blossoms — Revival of the old Barthelmess-Gish classic, with Dolly Haas and Emlyn Williams in the principal roles. The brutal elements are savagely overemphasized. Don’t take the children.

The Plainsman.—A great big beautiful Western; with Gary Cooper as Wild Bill Hickok and Jean Arthur as Calamity Jane. It will take two hours of your time, but it’s worth it.

Love On The Run.—That familiar setup, the heiress, the reporter and the spy, in a wild chase across France. With Clark Gable, Joan Crawford and Franchot Tone. While not particularly original, it’s a fast, smooth-running and entertaining picture.

The Man Who Lived Twice.—A Jekyll-andH.vde story about a gunman (Ralph Bellamy) who is operated on for crime. It’s farfetched but fairly interesting.

Winterset. — Maxwell Anderson’s poetic drama of the underworld, finely screened, with most of the original stage cast, including Burgess Meredith and Margo. One of the season’s best pictures.

The Garden Of Allah.—Marlene Dietrich and the Sahara in technicolor, and both submitting handsomely to the new process. The story, however, drags and isn’t very convincing. With Charles Boyer.

Three Smart Girls.—Deanna Durbin the 14year-old singing sensation, in a prankish film about family life. Families should enjoy it.

Libeled Lady. — What happened when an heiress sued a newspaper for defamation. Myrna Loy is the heiress, Spencer Tracy the newspaper man, and William Powell and Jean Harlow assist with the defamation. Very lively and bright.

Three Men On A Horse. — The Broadway comedy in a good screen adaptation. With Frank McHugh and Joan Blondell. Very 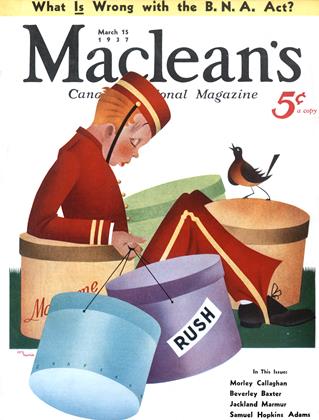