Head Over Heels in Love

HEAD OVER Heels in Love" has pretty Jessie Matthews as its dancing and singing star, and half a dozen songs by Gordon and Revel. The songs are catchy, and Miss Matthews has never looked better or danced and acted more charmingly.

But the picture lacks pace and variety— a good comedian would have helped a great deal in breaking up the long sentimental sequences. The heroine falls in and out of love and suffers and recovers, and it’s all very pretty and romantic, but you won’t lind many unexpected laughs in the picture. In fact you won’t find any laughs at all, or even anything unexpected. It’s just a case of waiting for the heroine to find her way into the right pair of arms, without ever a minute’s doubt which pair of arms it will be. Miss Matthews carries the whole weight of the entertainment and deserves the highest credit. But she should have had at least a comic waiter to help her out.

That Girl From Paris

SOMEHOW WE got the feeling that “That Girl from Paris” wasn’t entirely fair to Miss Lily Pons. It makes her almost continuously comic for one thing, and, while she has talent for comedy, it isn’t entirely her specialty. Opera is Miss Pons’ field and although she got a chance at one fine aria, from “The Barber of Seville,” she seemed most of the time to be stooging for Jack Oakie.

The story is about a French singer who falls in love with a swing-band player (Gene Raymond) and stows away in his cabin to come to America. Reaching America, she becomes an alternative problem for Gene Raymond and the Immigration Department. It’s a fairly routine and subordinate role and, apart from the aria, almost any Hollywood actress with a good voice could have tilled it acceptably. The antics of Jack Oakie take up a large part of the picture, and Oakie fans will enjoy it. The Pons following may be a little disappointed.

MAID OF SALEM” describes the fanatical days of witch-persecution in New England three centuries ago, and the producers have made a thoroughgoing historical job of it. They have given us plenty of romantic narrative, and along with it a solid helping of the educational

detail that is more strictly for our own good. In fact you will come away from "Maid of Salem” with almost a specialist ’s knowledge of the times, customs, ideas and interiors of the Salem community 300 years ago. It’s only in the latter half that the picture is finally handed over to the principals (Claudette Colbert and Fred MacMurray) and winds up to the usual crisis, climax and conclusion.

Miss Colbert and Mr. MacMurray are attractive and persuasive as usual, but the most exciting jierformance is given by little Bonita Granville, whose talent for being completely detestable brought her to the front in “These Three.” As the child demon who manages to drive a whole community into a state of hysteria and self-destruction, she excels both herself and most of the grownups in the picture. “Maid of Salem” is a decidedly worthwhile film, both as history lesson and as object lesson, and shouldn’t be missed.

God’s Country and the Woman

THERE’S an old-fashioned touch about “God’s Country and the Woman” in spite of the new technicolor process. The novel about lumber war and sex war has been readapted to the screen, with modern dialogue, dress, interiors and modes of travel. But it still belongs to the period when a romance could successfully be written about the reformation of a frivolous playboy at the hands of a fine, sturdy, severe woman.

Beverley Roberts is the woman, striding about in shirt and breeks, shouting orders to everyone and slapping Mr. Brent in the face when he becomes too pressing in his admiration. That was the novelist’s Dream Woman of a quarter of a century ago. However, she continues to fascinate him, and in the end love and taxi’s Country work their miracle, bringing out everything that is feminine in the heroine

(which isn’t a great deal) and making a fine manly lumber king of the hero. The romance seems rather silly, but there are some exciting lumber-camp shots and sequences, and the technicolored scenery is impressive and beautiful in its own rat her unnatural way.

HOSPITALS and doctors are always good screen material, since in their antiseptic splendor they photograph so impressively. In operating rooms especially, doctors invariably contrive to look supernatural 1 y competent, even when the patient dies; which happened often enough in “Once a Doctor” to make most of us feel we would leave all our future maladies to chance and nature. The doctor hero (Donald Woods) in this picture had so many casualties in his ward that he was finally asked to leave the profession. The mortality incidence wasn’t his fault of course, but the doings of a drunken colleague. (This didn’t reassure us any; it would probably be our luck to fall into the hands of the colleague.) However, faith in himself, a turn of fortune and the love of a beautiful girl (Jean Muir) set everything to rights in the end. It’s not very convincing. but it’s fairly entertaining.

GEORGE ARLISS, apparently smarting under the criticism that he’s always George Arliss, has undertaken to play a double role in this picture an English foreign secretary, and his twin brother, the family black sheep. The black sheep is the familiar Arliss, the sly old codger of dozens of films; but the diplomat is nothing more than a carefully starched stuffed shirt. There’s the usual pair of young lovers and the familiar crisis in British affairs, and as always Mr.

Arliss (the unofficial Arliss) sets both lovers and the Empire to rights and speeds them on their way.

Apart from the novelty of presenting George Arliss simultaneously in his most buttoned-up and unbuttoned moods, the latest Arliss film isn’t unusual. On the whole it hardly seemed fair that one Arliss should be so completely incompetent and the other Arliss hold all the tricks. However, people who enjoy the Arliss tricks should find “Man of Affairs” entertaining.

Camille.—Greta Garbo gives life, freshness and vitality to the most famous invalid role of all time. With Robert Taylor. Don’t miss it.

Sing Me A Love Song.—A department-store comedy romance, the romance being between James Melton and Patricia Ellis, and the comedy between Hugh Herbert and Walter Catlett. The plot is familiar, the comedy wildly new. Recommended.

Rembrandt. — A distinguished, scholarly screen biography of the latter days of the great artist, magnificently acted by Charles Laughton. A family film and recommended.

After The Thin Man.—Sequel to “The Thin Man” and, while not quite up to the original, a long way ahead of most mysteries. With William Powell, Myrna Loy. Recommended.

Love On The Run. — A sort of composite photograph of all the Crawford-Gable-Tone pictures, with a Versailles interlude that is new. Familiar but lively screen fare.

Banjo On My Knee.—Joel McCrea meets, loses and finds Barbara Stanwyck, in a lower class idyll on the lower Mississippi. Some good songs and singing, but the plot repeats itself.

Broken Blossoms.—Revival of the D. W. Giilliths classic, handled with too much savagery to be pleasant. With Dolly Haas. Don’t take the children. 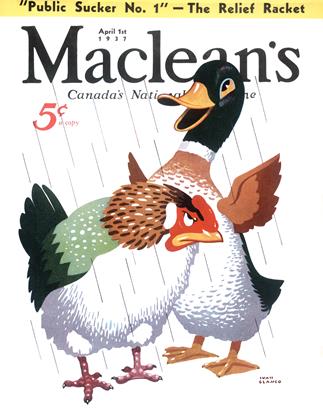