IT WAS DAWN in half the sky but darkness still lay on the round hills as Tom Crandall hurried through the orchard, fleeing the big house, fearful of the two watchmen who prowled all night, more fearful of the bright eyes of little Avery Crandall, that tattle-tale. Tom Crandall had got out by way of the servants’ wing, sneaking along the hall like a burglar, down a dark stairway, and so through a garage window that he himself had unlocked yesterday. His legs were short, so was his breath, but he pressed on down the stone-walled meadows, headed for Amos Billings’ house, which was humble and in a valley, not guarded by nosy servants. Amos Billings was Tom Crandall’s first friend—and his best.

The Billings geese limped about the wide-open doors of the red bam. Tom whistled cautiously. From inside the bam Amos answered, his voice muffled and faraway, queer, like a voice in a dream: “I’m

coming. I’m coming.” He came out into the sunlight and said:

“We said dawn,” Tom reminded him.

Amos picked up two hickory saplings. “You take ’em. I got the lunch and the worms. We’ll go down by the bridge first.”

They walked very slowly, now feeling the sun on their backs a little. At a turn of the old stony road, petals from the plum tree there floated down on them. Tom felt free and happy. He kept smiling. It had taken a lot of scheming, this running away. Tom Crandall wondered sometimes if even the King of England were better guarded than he. He said to Amos: “I got clean away, and I

have only one worry. It’s that kid Avery. Couple days ago I asked him to sneak off with me fishing, and he said no, it was his day for dancing school—he’s a stink, if there ever was one—and it seems to me I mentioned where I’d go fishing.”

Long before they saw it, the creek called from beyond the shagbarks and black walnuts. It was six or eight feet wide, frothing over round stones. Smaller stones knocked in the splash and rush; it all sounded like people talking, sighing, drawing in more breath to go on saying— something.

They stopped by the first pool, dark and deep; toward noon went on to another, but someone was swimming there. Their feet silent on the deep grass, Tom and Amos stopped, hidden by brush and young cedars. It was a girl—a neighbor,

Amos said later, snickering—about sixteen. As she climbed out onto a dark rock she seemed very slim and white. Her body startled, fascinated, Tom Crandall. He gazed with his mouth open, and after they

sneaked away he was silent and thoughtful, as if frightened. Back at the first pool, though, Amos caught a trout, a small one; and, envying him his luck, still Tom felt happy again. He said: “It is all the same, Amos.”

“Fishing with you, the crick, the bridge, the shad flies going round and round my head. Gee.”

“Well, why shouldn’t it be the same? Just because the Crandalls went away and came back, you think the bridge and the shad flies should fly away? Come on, let’s eat; I’m hungry.”

After lunch Amos was restless. He said it was getting pretty late.

“Yah, but I been thinking. What are all your folks saying right now—not counting your doctor?”

“They can all go jump in the lake, counting the doctor.”

“Yah, that’s all right for you to say, but they’ll blame me.”

“All right, all right,” unwillingly.

“Wait. Amos, I think I got one now. Sh-h-h.” Tom’s heart began to beat so fast he could hardly breathe. It was a bite sure enough. And just then, the worse possible moment, the fire siren far off in the village raised its lonely doom ful cry.

“Listen.” Amos began counting. “It’s not for a fire. I wonder . . .’’He looked thoughtfully, very soberly, at Tom Crandall.

Up the road something came to life, raised steadily an enormous purring sound, louder and louder. Two motorcycle cops. They stopped on the bridge, looked blankly into the thicket. One complained: “Why should he be around here? He was snatched before dawn.”

The other agreed. “How they got him out those gates, I don’t know. Look. Someone coming. A big car.”

“It is a Crandall car,” the first cop said.

Amy Crandall was driving it, a thin boy beside her. She stopped, questioned the policeman in a voice that was hard and calm, the voice of one accustomed to giving orders. “Go on to the next east-west lane,” she said, “and separate there. Ah, there’s the flyer at last !” An

airplane roared, circling low, slid away over the walnut trees. The policemen started their motors, went off, the dust flying, golden in the strong sun.

Amy Crandall got out of her car, followed by the thin boy. “Was it here, Avery? Goodness, you should have told us this morning.”

“How could I? You didn’t ask me. Yes, it must have been here he meant.” They peered over the rail of the little bridge. Amos stood up.

AMY CRANDALL came down through the [scratchy brush. She took Tom’s arm. “Thank God, you are safe! But your clothing is damp! You are chilly. Oh, oome, we must get you home at once, dear.”

Tom Crandall glared into Avery’s clean face. He could not kick Amy, who was at this moment in a very good, position for being kicked, stooping to fold the robe she had taken from the car. But Tom Crandall could kick Avery, and he did—on the right shin—so that Avery emitted a sharp yell and fell over backward into the brook.

“Avery,” said Mrs. Crandall sternly, “come out of there at once. Now look at yourself -all mud.” She led Tom Crandall to the car. “Oh, my dear, my dear,” she moaned, “think of the newspapers, the newspapers—all your responsibilities, the meeting today !”

“They can go jump in the lake, all of ’em,” Tom Crandall said defiantly.

But as he sank back into the car seat he knew he was not defying anybody—except perhaps his wet and frightened grandson—for Tom Crandall was seventy-eight years old and too rich to be left alone. He was, everybody insisted, somebody in the newspapers. He felt like nobody at all but his own small self, being dragged home again —again.—The End 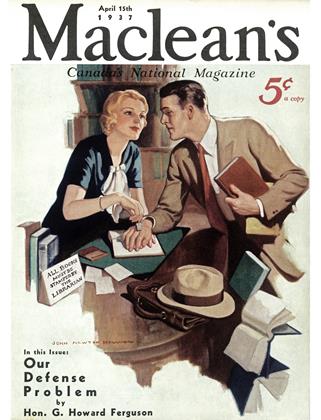