THE GOOD EARTH” is an extraordinary picture, filled with beauty and insight and filmed on a vast scale with an almost Biblical simplicity. The producers spent enormous sums of money in the screening of Pearl Buck’s famous novel, but they have spent it so wisely and with so little ostentation that the picture retains almost from first to last its simplicity and earthy greatness.

It is a tale of Chinese family life, with Paul Muni and Luise Rainer as the peasant husband and wife about whom revolve the clianging cycles of the seasons, of drought and rains, famine and plenty. Though Paul Muni’s performance is excellent as always, it is Luise Rainer who dominates the picture. The Committee of Motion Pictures critics have already awarded Miss Rainer the prize for the best performance of 1936 (as Anna Held in “The Great Ziegfeld”) which may put them in an embarrassing position at prizeawarding time next year, since it seems hardly possible that her mute and tragic performance as O-Lan will be surpassed on the screen in the remaining months of 1937.

"The Good Earth” is a heart-shaking picture. Many people will find its scenes of famine and physical anguish too much for endurance, and because of these sequences it isn’t recommended as a picture for children. But it has such beauty and authority and has so much to tell about humanity and life, that no adult should miss it.

FIRE OVER ENGLAND” ÍS an enormous, flourishing sixteenth-century romance. It’s a Korda production, which means that it is an exact re-creation of the detail, and an approximate reproduction of the history of the time. Mr. Korda has had a fine time with this film. When you get Good Queen Bess, Philip of Spain, the Spanish Armada and Flora Robson all in one picture, you have something important; and the producer hasn’t missed a single opportunity offered by his exciting material.

Along with the royal pomp and flourish goes a first-rate story, involving the loves and fortunes of a young adventurer (Lawrence Olivier), one of those handsome, reckless, balustrade-leaping heroes who may have lived in Tudor times or merely have been invented by Douglas Fairbanks, Senior. In any case Mr. Olivier plays him with style and pace, and the story of intrigue and adventure shuttles back and forth between Spain and England almost as rapidly as the hero leaps from love to danger, from housetop to horseback. Altogether, “Fire Over England” is fine, stirring historical melodrama, guaranteed to

send its audience out spent with excitement and bursting with patriotism.

IOVE IS NEWS” brings back to the J screen that inexhaustible pair, the Heiress and the Reporter. This time the heiress (Loretta Young), annoyed by the publicity lavished on her by the reporter (Tyrone Power, Jr.) neatly turns the tables on him by announcing their engagement in the tabloids. It’s a brand-new angle, but unfortunately the only new angle in the picture. The hero and heroine battle each other across the front page, neither yielding an inch, till suddenly love comes and they settle down to live happily in the spotlight ever after.

The good looks and high spirits of the two principals help things along, and the picture gives an impression of animation by its rapid dialogue, its eighty-mile-an-hour chase sequence, and the violent regularity with which the reporter and his city editor (Don Ameche) knock each other down’. But you get the feeling that it’s all been done before. You won’t learn anything about heiresses and reporters that you didn’t know before from this picture. Or even about screen heiresses and screen reporters.

THE BEST thing about “Great Guy” is that it brings James Cagney back to the screen after several months absence. He is on the side of law and order this time, fighting the good fight for the cheated housewife who buys chickens loaded with lead pipe, and strawberry boxes with false bottoms. It doesn’t sound very important as a beginning, but it isn’t long before Mr. Cagney’s disinterested researches bring the ward politicians, food racketeers and gangsters of the city swarming round his ears.

The action is quick and exciting, and though the whole thing turns to violent melodrama at the end and the plot itself is routine, the picture is well worth seeing—

largely because of James Cagney, who, whatever his role, is just about the finest actor on the American screen today.

Wings of the Morning

V\7 INGS OF THE MORNING” brings *V a new technicolor process to the screen along with John McCormack, some glimpses of Killamey and the Derby, and the new European star, Annabella. I liked Annabella best—better even than the new technicolor process, which didn’t, to tell the truth, seem very different from the old. The trees are still very very green, the water is very very blue, the people’s faces are still a pinky beige. Annabella, however, is different—fresh and charming, with a face that couldn’t possibly be mistaken for any face in Hollywood.

The story deals with gypsies, love and horseracing, all highly popular elements. In fact it’s sure-fire entertainment—romantic, handsomely produced, and with cunningly worked-out double suspense in the final sequence. The producers have spent a great deal of money and haven’t wasted a cent of it. They’ve got all their money’s worth out of their material; and the audience will get all its money’s worth from the result.

The Last of Mrs. Cheney

THIS PICTURE is familiar melodrama based on the Lady Raffles theme, but it has at least one fresh touch in its present version—Joan Crawford’s new eyebrows. Miss Crawford’s eyebrows are far more startling than her story, which is the traditional one about the poor but ambitious girl who insinuates herself in British upperclass society in order to steal pearls from the matrons of Mayfair.

Diking has a part that fits him like his own London-tailored evening clothes, and Jessie Ralph is redoubtable as the one-time chorus girl who married into the peerage. “The Last of Mrs. Cheney” is well cast and handsomely produced. But it’s just a question whether it was worth producing at all.

Camille.—A wan but beautiful Garbo in the greatest invalid role of history. With Robert Taylor, Henry Daniell, Lionel Barrymore, A magnificent production and not to be missed by adults. Childrenwon’t enjoy it.

On the Avenue.—Worth seeing for Madeleine Carroll and Alice Faye, the two beautiful blond rivals for the hand of Dick Powell. Worth hearing, too, for the charming Irving Berlin music. Plot and comedy not so good.

Beloved Enemy.—Romance and the Irish Rebellion. With Merle Oberon and Brian Aherne as the young people divided between politics «and love. Good entertainment.

When You’re In Love.—Good average Grace Moore entertainment. The heroine has trouble with love, Cary Grant and the’Immigration Department. But she has no trouble with her singing. Grace Moore fans won’t want to miss it.

That Girl From Paris.—More trouble with love and the Immigration Department, accompanied by song. (Can the boys have been copying off each other’s slates?) With Lily Pons, Gene Raymondr, Jack Oakie. Fair

The Plough and the Stars.—The Dublin Rebellion of Easter Sunday, 1916. With Barbara Stanwyck, Preston Foster and the Abbey Players. The box office doesn’t give this film a high ratirfg, but it’s a beautiful and exciting picture just the same.

The Great O’Malley.—A mean, nagging policeman (Pat O’Brien) who tries to bully the public into mending its ways, meets a little crippled child (Sybil Jason) and learns to mend his own. Very sentimental.

God’s Country and the Woman.—The oldfashioned’ lumber melodrama, fixed up with technicolor but looking all its age under the make-up. With Beverly Roberts, George Brent.

Maid of Salem.—Witch baiting in the old New England days. With Claudette Colbert, Fred MacMurray. Educational and exciting in about equal parts. Recommended.

Winterset.—Fine screen version of Maxwell Anderson’s poetic drama of the underworld. Too sinister for children, but no adult should miss it. With Burgess Meredith, and Margo.

The Garden of Allah.—Drama of love and sacrifice in the Sahara Desert. With Marlene Dietrich, Charles Boyer. Not highly recommended.

Rembrandt.—Screen biography of the great artist, with Charles Laughton superb in the title role. A family film. 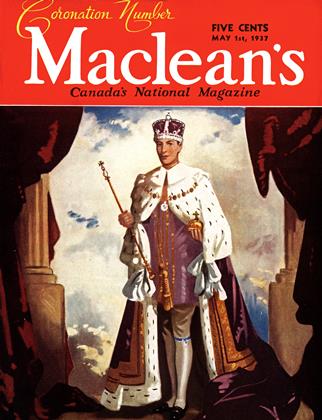