Top of the Town

IN THIS picture the Richest Girl in America (Doris Nolan this time) is to the front again, in love with a swingband leader (George Murphy). There seems to be only one plot for pictures involving an heiress and a popular entertainer. and this one follows it faithfully. As usual, he betrays her confidence, and in revenge she becomes sponsor of his nightclub program. When, »on opening night, the heroine puts on her carefully selected program symbolic dances interspersed with recitations from Hamlet it acts on the audience like an old-fashioned fire alarm; and just in time the hero’s swing orchestra and tappers go into action and the situation is saved once more.

“Top of the Town” is bigger, noisier and wilder than anything that has gone before, and the final big jamboree sequence has all the native abandon of a potlatch celebration on an Indian reserve, except that it takes place in full evening dress on the top floor of a ninety-story skyscraper. There are a great many new faces in “Top of the Town," but 1 liked the old ones best —principally Hugh Herbert's and Mischa Auer’s. These two supply most of the comedy in their very best style. George Murphy’s tapping is fast and dexterous, and Doris Nolan is almost beautiful enough to make up for the fact that she missed most of the comedy possibilities of her role.

"V\7"AIKIKI WEDDING” brings us * * Bing Crosby as promoter of a pineapple company, and Shirley Ross as a pineapple queen sent to Hawaii as a contest winner in the interest of the pineapple export trade. When the pineapple queen gets bored and refuses to co-operate with the publicity department, Bing is selected to show her Hawaii on its exotic, or hokum, side. So “Waikiki Wedding” turns out to be a tuneful and amusing debunking of the Hawaiian legend, Bing supplying most of the tunes and Martha Raye, as the heroine’s companion, most of the comedy.

on the screen. The romantic element isn’t sacrificed, of course there’s still plenty of guitar music, palm-tree landscape, and leis and leis and leis. But it’s all handled a good deal more lightly and entertainingly than the usual South Seas romance.

’ I 'HE SCREEN seems to be devoting itself these days to the hardships, not to say downright persecutions, suffered by the medical profession. Young movie goers who are considering taking up man’s noblest calling will probably think twice about it after seeing “Green Light,” “Once a Doctor,” and now “Outcast,” since it seems that the nobler a doctor is the worse he has to suffer.

Warren William is the latest screen medical martyr. In “Outcast” he forfeits his standing, his profession, even his instrument case, and comes within less than a dozen film feet of being lynched by an enraged mob. Karen Morley, as the heroine, does what she can to make things worse for him. Neither role gives either of the principals much opportunity for convincing acting. The dependable Lewis Stone who plays the part of a kind and wily lawyer, is the only, person in “Outcast” who offers a believable characterization.

IRL OVERBOARD,” featuring Gloria Stuart and Walter Pidgeon, is finely exciting for the first twenty minutes or so, with an escape, a murder, an arrest and a spectacular fire and rescue at sea. Unfortunately, the picture has packed all the

excitement into the opening sequences. The mystery is cleared up for the audience almost at the beginning of the film, and after that the story devotes itself to extricating the beautiful suspect from her involvements with the authorities. Actually these are very slight. The police are satisfied, and everyone except a curious reporter seems willing to let bygones be bygones. Altogether, the heroine, who was further protected by a romantic district attorney, had very little to worry about; which left the audience with very little to be excited about. Except for its lively early sequences, “Girl Overboard” is very moclerate entertainment.

We Have Our Moments

\WE HAVE OUR MOMENTS” is a W fairly routine crook - comedy - romance. A pretty schoolteacher (Sally Eilers) starts out to see the world and very soon finds herself involved, not too breathtakingly, with the underworld. Most of the action takes place on shipboard, and the crooks are the usual affable group who can’t be distinguished from the rest of the passengers except by their superior manners. They plant a hundred thousand dollars in the heroine’s wardrobe trunk, then trail her to Monte Carlo. So does a romantic detective (James Dunn).

All these characters revolve about each other tactfully, and the plot, up to the final scene, is marked by a complete absence of ill-nature or even suspense. “We Have Our Moments” seems to have been concocted chiefly to bring Sally Eilers and James Dunn together again after their long screen separation. It’s

Lost Horizon.—The James Hilton-Frank Capra fantasy about love among the lamas in Tibet. A very handsome, often exciting, and occasionally preposterous film. With Ronald Colman. Young people will enjoy the adventure sequences, which are superb.

You Only Live Once.—The best underworld thriller of the year. With Sylvia Sidney, Henry Fonda. This picture has both excitement and genuine feeling, and is recommended for everyone, except the very young.

May time.—Jeanette MacDonald and Nelson Eddy singing like larks in a fine revival of the old-fashioned operetta. The season’s most charming musical film. For everybody.

We’re on the Jury.—Revival of “Ladies of the Jury,’’ with some new faces. Fairly amusing if you didn’t see the original, with Edna Mae Oliver. With Helen Broderick and Victor Moore.

Silent Barrier.—Canadian history makes its first screen appearance in this impressive film description of the building of the C.P.R. Story and acting are only fair, but the material and photography are superb. For the family.

The Man Who Could Work Miracles.—Screen version of H. G. Wells’ fantasy about the English clerk with a talent for the supernatural. With Roland Young as the miracle man. A family film and recommended.

Wings of the Morning.—A film combining all the elements that make sure-fire amusement —romance, horse-racing and fine technicolor. With Annabella, the new European screen star, and Henry Fonda. A family picture.

Fire Over England.—Elaborate and exciting historical drama, with Flora Robson in a fine high-and-mighty performance as Good Queen Bess. A family film.

The Last of Mrs. Cheney.—Joan Crawford as the American widow who stole pearls from the matrons of Mayfair and made them feel ashamed of themselves at the same time. A handsome production, though a little dated. With William Powell and Robert Montgomery.

Camille.—Greta Garbo in a wan but beautiful performance as the famous invalid. A splendidly produced and worth-while picture. Not of interest to children, however.

The Plainsman.—A fine big beautiful Western, with Gary Cooper and Jean Arthur. More fun than you’ve had since you used to play Indian.

Winterset.—Splendid screen version of Maxwell Anderson’s poetic stage drama. Not for children, however. 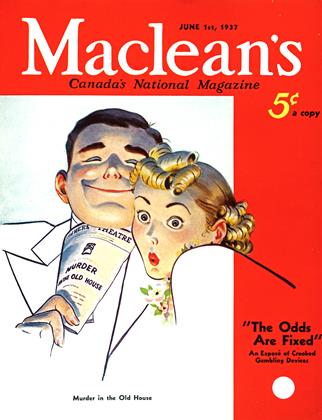