A Star Is Born

A STAR IS BORN,” a study of private lives in Hollywood, is one of the most humanly revealing pictures of the movie colony that the screen has ever produced. It is the story of a movie star (Janet Gaynor) and her problem of marriage and two careers—her own and her husband’s. She is a star who has just risen, her husband (Fredric March) a screen idol who is on the decline; and the tale of their conflicting love and jealousy, triumph and ignominy, is beautifully and heartbreakingly revealed on (he screen.

This picture isn’t just a fairy tale,from the fan magazines, but an honest story of two people trying to work out their bewildered lives in full view of a public as idolatrous, fickle and savage as any crowd in a Roman arena. Janet Gaynor’s performance is versatile, touching and sincere, but it is Fredric March’s quiet and poignant portrayal of the forgotten hero that will make “A Star is Born” a picture you will remember. The whole thing is in technicolor, but apart from Janet Gaynor’s hair and a Pacific sunset, both the same shade of angry copper, there was nothing to startle the eye. Maybe we’re getting used to technicolor. Or maybe it really is getting better.

PERSONAL PROPERTY” is a handsomelv turned out picture with a competent and well-dressed group of players, headed by Jean Harlow and Robert Taylor. It’s a revival of ‘‘The Man in Possession,” with Robert Taylor this time as the playboy bailiff who loved a beautiful widow (Jean Harlow) with one foot in society and the other in the bankruptcy court. The plot, even if you didn’t know it in advance, isn’t exactly one to rack you with suspense, and while the players work hard at their comedy parts and get a number of well-earned laughs, the picture as a whole conveys a sense of considerable strain on rather thin material.

C HALL WE DANCE?” is the best and ^ freshest Astaire-Rogers film in a long time. The comedy is bright, the pace light and fast, and the dancing of the two stars seems to go right on improving up to and beyond perfection. The plot itself might be the plot of any of their pictures, its chief function being to bring the two together and provide large cleared spaces for their big special numbers—the deck of a liner, the floor of a New York roof garden, a roller-skating circle in Central Park.

The best dance sequence, however, is a solo number performed by Fred Astaire in a liner engine room, an amazingly ingeni-

ous and spectacular accompaniment to the beat and movement of the ship’s engines. He is the famous Petroff, determined to marry an American tap dancer (Ginger Rogers) who in turn is determined to marry a Long Island millionaire; and it takes the combined efforts of their managers, the press and several screen writers wrestling with the plot to separate them and bring them finally together. The music this time is by George Gershwin and. while the lyrics aren’t as tuneful as Irving Berlin’s, the rhythm is exciting, the tempo fast and brilliant. Eric Blore as a wheedlingly affectionate hotel floor manager provides most of the comedy.

When Love Is Young

1 I 'HIS PICTURE tells about a smalltown girl (Virginia Bruce) who lives on the wrong side of the tracks and is scorned by her more prosperous high-school classmates. Fired by their neglect, she goes off to New York to study vocal music. What is their surprise—and what is ours—when she becomes an overnight sensation on Broadw'ay and returns to her home town trailing clouds of glory and press notices.

She’s a gentle girl, however, and doesn’t come back to triumph over the high-school meanies but to reclaim the love of a smalltowm hero. Taking one good straight look at him. she hurries right back to her true love (Kent Taylor), a Broadway press agent. It’s the usual Cinderella tale, enlivened a little by glimpses of a Broadway musical show. Miss Bruce’s performance is fair and mild, but a little too gentle to make her sudden Broadway translation believable.

History is Made at Night

VATE ARE NOT skimped on drama in * ’ this picture, since it gives us love, jealousy, murder, divorce and one of the greatest sea disasters in history. The shipwreck, obviously based on the sinking of the Titanic, comes last of all, and the picture builds to it steadily and ominously. The final terror, when the iceberg looms suddenly out of the sea and fog, is enough

to wake you shuddering in the night.

The circumstances of the shipwreck are rather extravagant, even for the movies. A beautiful divorcee (Jean Arthur) is returning to Paris with her lover (Charles Boyer) on a liner controlled by her former husband, a ship magnate (Colin Clive). To thwart the lovers the jealous ex-husband arranges to have the ship scuttled in an ice field; which, considering that there were 3,000 other people aboard, seemed to be carrying personal feeling pretty far. The collision when it comes is terrific—about the nearest one could come to a real shipwreck without getting actually wet. “History is Made at Night” is a highly dramatic and exciting picture; but better not take the children. No need for them to wake shuddering in the night.

YW'HEN’S YOUR BIRTHDAY?” *^ brings us Joe E. Brown as an ambitious student of astrology. Working on planetary conjunctions he is able to forecast the outcome of sporting events, and soon finds himself incorporated by a group of sports promoters. Before long he has an office to himself, complete with a map of the zodiac and a beautiful secretary (Marian Marsh).

The hero’s predictions are infallible, but his emotions unfortunately are unpredictable and when love beckons he rushes off, neglecting his office work and forgetting to leave with his promoters a planetary reading of a scheduled prize-fighting event. There’s plenty of suspense and a climax that is fast, funny and violent. The plot shows visible tracings from “Three Men on a Horse,” but it has plenty of moments of comedy in its own right.

The Prince and the Pauper

A^ERY YOUNG people—boys and girls V of approximately the age of the twin principals, Billy and Bobby Mauch—will find the screen version of Mark Twain’s “The Prince and the Pauper” exactly the picture they have been waiting for ever since they started going to the movies. It’s

about three parts adventure to one part history, it’s filled with pageantry and swordplay, and for once there’s no embarrassing love interest. This time the boys and girls have the dashing Errol Flynn all to themselves, with no beautiful but helpless young woman to distract his attention and take up the plot. The Mauch twins’ collaboration is a highly successful one. They are good-looking, lively youngsters, so astonishingly identical that it’s hard to believe the camera isn’t just playing tricks. Apart from the period and the elaborate background of Tudor splendor and intrigue, there’s very little that is actually historical about “The Prince and the Pauper.” It’s a sort of Tom Sawyer-Huckleberry Finn adventure in a royal sixteenth-century setting. Take the family.

The Man Who Could Work Miracles.—The

H. G. Wells parable about the dry-goods clerk who took charge of the universe. With Roland Young. Recommended.

Wings of the Morning.—Romance in the Killarney district. The technicolor success, featuring the bright new star, Annabella. Recommended.

Barrie’s quaint and coquettish Regency comedy. People who prefer charm to slapstick in their comedy will enjoy it.

Outcast.—More trouble in the medical profession, with Warren William and Karen Morley as the principal sufferers. Not so good.

Love is News.—Another hop-skip-and-jump romance between a reporter and an heiress. With Loretta Young and Tyrone Power. Lively entertainment.

The Last of Mrs. Cheney.—Joan Crawford as the American heroine with fine ideals but no principles, who stole pearls from the British upper classes. With Robert Montgomery, William Powell. A handsome production though a little dated.

Silent Barriers.—The British studios demonstrate that the building of the C.P.R. is just as exciting historical material as wars, abdications and armadas. Take the family.

Maytime.—The favorite operetta beautifully dressed up and prettier and fresher than ever. With Nelson Eddy, Jeanette MacDonald. Recommended.

You Only Live Once.—Underworld drama involving Henry Fonda and Sylvia Sidney as a pair of tragic lovers outside the law. Superbly directed by Fritz Lang. Recommended, but not to children. 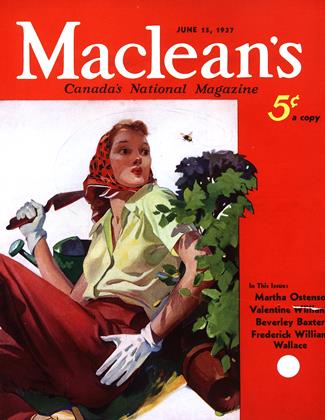