THE SAVAGE barking of a revolver drifted over the choppy waters of New York harbor. Bud Donahue, ace newsreel cameraman, crouched behind his camera, regarding with unwavering eyes the lurid spits of flame stabbing at him from a gleaming gun barrel. Hot lead sang close to him and bit viciously into the boards at his back.

Bang! Bang! Bang! .Scorching slugs of metal all around him, but Donahue cranked on coolly, confidently— in duty bound to give theatre audiences over the American continent the vicarious thrill of being shot at by the world’s deadliest gunman.

The firing ceased. A squad of grim-faced, uniformed men surrounded the individual who had been directing the whistling messengers of death at Bud Donahue. They gesticulated and shouted as they pressed in, threatening to mob him.

But it was not a troop of law officers nabbing one of the country’s public enemies in the act of endangering the existence of a star newsreel man. They were members of the 18th United States Infantry who had just witnessed an amazing exhibition of revolver shooting by the world’s champion revolver shot, Robert George Pickrell, sergeant of the Canadian National Railways police at Winnipeg.

“Could you leave us a souvenir of good shooting as an example for future recruits to follow?” asked the officer commanding the platoon of soldiers.

The tall, forty-year-old C. N. R. sergeant eyed a regulation army target twenty yards away and smiled. “Too large,” he mused, and stepped back to forty yards. Taking aim, he drilled the bull’s-eye in the centre, then placed five more shots around it. Fishing a fifty-cent piece from his pocket, the young lieutenant ambled over to the perforated target and gasped in astonishment. The coin completely covered the entire group !

THE ABOVE scene, recently enacted on the shore of New York harbor at Fort Wadsworth, Staten Island, is only a small example of what could be done by the man who holds most of the world’s records for revolver and pistol shooting, and who has won such a vast collection of awards that it would require a large-sized trunk to pack all his trophies, and the chests of a dozen broad-shouldered major-generals on which to pin the medals.

Sergeant Pickrell’s first contact with a weapon of any sort came during the first year of the War. Enlisting at the age of sixteen, his phenomenal proficiency with a machine gun amazed his officers. After a few months in the trenches he was given a commission, and became the regimental machine-gun officer. Then he was transferred to the air force.

After the War there followed four years of aimless knocking about England. Then Bob Pickrell got aboard a steamer and crossed to Canada. Arriving at Winnipeg in 1922, he found that flying was making its debut in the North country and there was immediate need for experienced flyers.

For five years he continued with the profession that war had schooled him inpassenger flying, freighting, forestry patrol, and Government aerial photography and surveying. In 1927 he landed his last plane. A few weeks later he was taken on the staff of the Canadian National Railways police.

“You will report at the armories tomorrow for target practice,” he was told by the police sergeant in charge.

At the ranges next day. Bob was handed a six-shooter. It was small and light after the substantial grips of the machine guns he was accustomed to during the War, and he felt a creeping sense of shame at having descended from shooting with the king of weapons to—this.

Soon he found himself excelling the other rookies, and he was not long in the force when he outclassed even his superiors. Before his first year was over, the police inspector appointed him captain of the C. N. R. team to compete for the Manitoba revolver championship.

Heretofore, the MacLimont Trophy, emblematic of the provincial title, had never been won by a C. N. R. team. But Sergeant Pickrell and his straight-shooting boys entered the 1927 fray and captured it. They won the trophy three years in succession, and, though they had the right to keep it, they put it back for further competition, they themselves dropping out of the contest. That same year his team

The routine of a large subscription list requires a period of a few days before a renewal can be recorded. A notice, therefore, may in some instances go forward to you even after remittance actually has reached us. In such cases, please ignore the notice and accept our regrets and thanks.

went to Ottawa and returned with the open police championship of the Dominion.

Two years later Pickrell won his first individual trophy by defeating 700 other competitors for the Novice Championship of North America. A few weeks later he made a triumphal exit from Montreal carrying with him the revolver, rapid-fire, and pistol championships of Canada.

In 1930 he acquired the Canadian Military revolver shooting and the individual police titles. While shooting for the latter award he piled up an aggregate of 296 points out of 300, which still stands as a Dominion record in that class. His records for rapid, deliberate, and pistol shooting have not yet been equalled by any Canadian.

The United States Revolver Association matches were being held at Springfield in 1933. Up to that time the world’s record was held by Dr. I. Colkins, of Springfield. But the Massachusetts doctor was forced to abdicate for a new revolver king, Sergeant Pickrell, of Winnipeg, who amazed other competitors by scoring 246 points out of the possible 250—a record which has not yet been broken.

The conquest of the British Isles was his next accomplishment, when he sailed with the Canadian rifle team for Bisley two years ago. At Birmingham he emerged victorious in the contest for the revolver title of Great Britain. To add further to his laurels, he gained the Scottish pistol shooting crown at St. Andrews.

From England he went to Rome. Here, sharpshooters from eighteen leading countries were congregated to compete in a match held by the International Shooting Union. On this occasion Pickrell had the honor of representing not only Canada but the British Empire as well.

In the shadow of the Colosseum, he shot shoulder to shoulder with the world’s premier revolver shots for the Master Shooter of the W'orld Badge—and won it. For this medal the contenders do not compete against each other but against their own skill. If they attain a certain score they are awarded the badge. The C. N. R. sergeant holds the only medal of this kind in Canada.

The following year the Winnipeg policeman garnered more trophies for his already bulging chest of silver, by attaining the highest aggregate in the U. S. Pistol League competition and the U. S. Revolver Association shoot. This is the first time in history that both of these championships have been won by a single individual.

‘‘The only form of exercise I do to maintain a steady hand,” he says, “is stretching out my arms sideways to full length and

revolving them in a circle for several minutes each day. This builds up the shoulder muscles, which are the main support of the outstretched arm in shooting.”

Though he is the deadliest marksman in the world. Bob Pickrell has never had the occasion to shoot at a living target during the course of his duties. “But,” he stresses, “every man on any police force should be a first-class revolver shot. An officer who knows how to handle his pistol well is master of any nasty situation when in contact with law breakers. The real way to apprehend a criminal is not by shooting him dead, but by disabling him with a well-placed shot.” 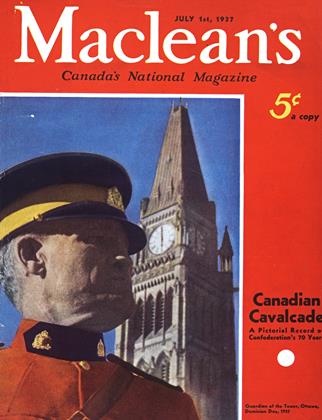