NIGHT MUST FALL” is a new type of movie thriller, bristling with unfamiliar shocks. The principal shock is the appearance of affable Robert Montgomery as a homicidal maniac with a Cockney accent. Mr. Montgomery, tired of his customary male-charmer roles, selected this part for himself and makes a grim, thorough job of his lady-killing. Dame May Whitty is the chief victim, and Rosalind Russell is the unfortunate heroine.

It isn’t exactly a pleasant study, but it’s extraordinarily well done, with moments so tense that you can almost hear your neighbor’s scalp creep. Robert Montgomery’s performance as the sinister bus boy of the piece should go a long way to convince his public that he had a right to rebel against the harmless-type casting to which he has had to submit so long. “Night Must Fall” is strong movie fare, even for adults. Better not take the children.

I Met IHm in Paris

A BRIGHT, well-written comedy about a fashion designer (Claudette Colbert) who goes to Paris for a holiday. There she meets two admiring Americans (Robert Young and Melvyn Douglas) and presently the three, pick up and go to Switzerland, the way people do in the movies, where nobody has to worry about jobs or railway fare. In Switzerland they ski, skate, romp, tumble in and out of snowbanks and fall in and out of love; till the wife of one of the escorts turns up and puts an end to the fun. Fortunately, there’s still the unattached escort, who turns out, to nobody’s surprise, to be Mr. Right after all. The acting and direction of “I Met Him in Paris” are bright, the winter resort photography is exceptionally fine, but the chief charm of the picture is its apt and lively dialogue.

T)EOPLE WHO laugh at Laurel and Hardy will have lots of fun at “Way Out West;” and people who don’t will probably go right on thinking they are terrible. I always find the pair funny, which may be either a taste or a mental weakness. In “Way Out West” the two set out to find an unknown orphan and

present her with the title to a gold mine; which leads, among other things, to falls off a roof, the wrecking of a grand piano, and the introduction of an army mule into a second-story window. It’s very simpleminded and violent, and definitely not for people who prefer the comedy of understatement.

Way for Tomorrow” is one of the most distinguished pictures of the season. It’s about two old people (Victor Moore and Beulah Bondi) who lose their home and are forced to live separately with their bored and irritated children. There isn’t a great deal of action—it’s chiefly a recital of small day-by-day exasperations—but the whole thing totals lip to a fairly grim exposure of middle-class selfishness and cruelty.

' PHIS PICTURE presents some of the domestic troubles of a drinking man, more or less on their comic-strip side. The family consists of a nice daughter (Betty Furness), a weak son (Eric Linden), a fine wife and mother (Janet Beecher) who devotes herself to worrying over her husband’s drinking, and the good old soak a (Wallace Beery) who devotes himself to drinking. But years of prohibition hooch haven’t ruined his fine mind, and when the crisis comes he is, of course, the one who gets the demoralized family on its feet. Una Merkel, Ted Healy and a comedy parrot supply the humor. It’s fairly amusing.

its producers—it’s a little too sober for entertainment and a little too penetrating for comfort. But it is an exceptionally fine picture, honest and sensitive and beautifully acted, especially by Victor Moore and Beulah Bondi.

HPHERE’S a plot of a sort in “Woman Chases Man” which occasionally rears its bewildered head above the dizzy scramble of antics, wisecracks, foolery and tree-top sitting. Joel McCrea is the hero, the possessor of a million dollars, and Miriam Hopkins is the beautiful girl who chases him. She chases him for his million dollars, with which she hopes to build a model modern village. She also chases him because she loves him. The chase ends in the top of a tree which Mr. McCrea thoughtfully furnishes with a chair and a bridge lamp, and tranquillity is restored

H^HE BLACK LEGION” is a story -*• behind the headlines. They happen to be last year’s headlines, but that doesn’t make the picture any less grim and exciting. It’s the story of a disgruntled working man (Humphrey Bogart) who joins the secret legion to work off a personal grudge, and gradually finds himself more and more deeply involved in murder and lawlessness. The picture is a superbly handled description of personal degradation, against a background of mass brutality and terrorism. “The Black Legion” is a pretty grim study of human society, which adults will find authentic, deplorable and well worthy of their attention. But it’s better to keep the truth from the children for a while.

when someone empties a bucket of water over his head.

This is just an unpolished summary, bul it may give a rough idea of the goings-on None of “Woman Chases Man” makes much sense, but it’s often very bright in a deranged sort of way. Sensible people will probably shake their heads over it and wonder once more what the movies are coming to. 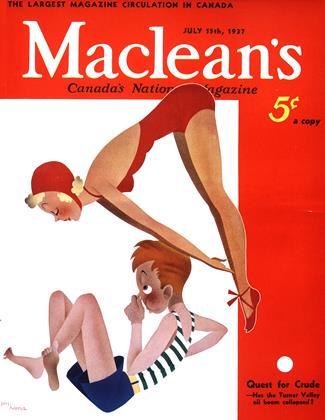