ELEPHANT BOY” is one of those rare pictures that are made to please everybody, and actually succeed in doing it. It is hard to imagine anyone who wouldn’t get some thrill of delight or excitement from this beautiful filming of Rudyard Kipling’s “Toomai of the Elephants.” There’s a wonderful trick elephant in it who is almost as clever in front of the camera as though he had grown up in a studio lot; and a remarkable child actor called Sabu, who, for once, is as natural and spontaneous as if he didn’t know a camera existed. (Sabu, formerly an Indian ragamuffin, now has a movie contract, and our advice is to see him right away, in his first picture, before he is introduced to elocution, tap-dancing, and other elements of civilization.)

The boy and the elephant provide most of the entertainment, and will transport most of the younger movie-goers. Older people will get their satisfaction from Robert Flaherty’s wonderfully photographed glimpses of native India. Altogether, “Elephant Boy” is home-andschool entertainment in its happiest aspect, and shouldn’t be missed by anyone.

ROMANCE IN PARIS” looks remark“ ably like a hangover from the Abdication crisis, since it deals with the romance of a bachelor monarch and a highly attractive American. This is pure coincidence, however. Groucho Marx wrote the screen play, in the very best taste, long before it turned into approximate history. It’s the story of ex-King Alfred, a Grau-

starkian monarch (Fernand Gravet), and his love foi a Brooklyn girl (Joan Blondell), a dancer in the Folies Bergères. The heroine is a high-minded girl in spite of her light airs, determined to be taken seriously. When she finally discovers herself at sea, the only passenger on a large ocean liner that the monarch has chartered just for her, she recognizes that this is true love and they are joyfully married by the ship’s captain.

The two nrincipals are lively and likable, and the story is mildly funny. Edward Everett Horton is present, as an exchancellor, skipping about as usual from one nervous crisis to another. “Romance in Paris” is much more sensible than you might expect, considering the authorship—without being extra sensible.

WITH ALL the material and talent available for its success, “Parnell” should have been one of the season’s most exciting pictures. Love and politics usually mix well on the screen, and here they had an authentic historical basis— the famous affair between Charles Stewart Parnell and Mrs. Katie O’Shea. There’s the question of Irish Home Rule, too, which stirred up some furious feeling in its day. As it happens, however, the picture has been worked out in a mild spirit of letting bygones be bygones, concentrating on the more innocent aspects of the romance and the speechmaking side of the politics.

The principals too arc oddly miscast. Clark Gable, that healthy young American, won’t remind you for a minute of an Irish patriot, especially an Irish patriot with a heart condition. And Myrna Loy, though picturesque and charming in bonnet and bustle, didn’t quite suggest the Irish matron who helped set Home Rule back a quarter of a century. The supjxirting players aie excellent, particularly Montagu I-ove as Gladstone. Settings and costumes too are handsome and scrupulously exact. Altogether, “Parnell” is a serious, stately picture, admirable in many ways. But it isn’t an awful lot of fun.

PEOPLE WHO enjoy the strange witlessness of Bob Burns and Martha Raye will like “Mountain Music,” a little piece of midsummer lunacy about a hillbilly (Bob Burns) who suffers from amnesia. During his periods of forgetfulness he loves a wistful mountain girl (Martha Raye); but as soon as he is revived, sometimes with a pail of water, occasionally with the fire hose, his love turns to loathing. Then, to recapture his love, she has to hit him over the head with a piece of cord wood.

Rufe Davis assists this homespun fantasy by giving imitations of a locomotive and a backfiring motorboat so cleverly that it’s almost as much fun as listening to a locomotive or a motorboat. 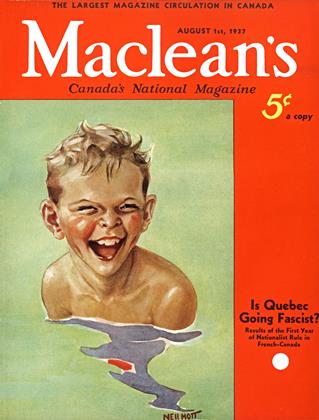