A DAY AT THE RACES” brings us the Marx Brothers at their best; which means that their latest film is a good deal like their other films and wildly unlike anything else on earth. Groucho is still furiously vocal, Harpo still more furiously dumb, and Chico assists them both at the piano. Madame Margaret Dumont is present once more, and as always deserves special citation for gallantry in action.

for a harp. Others will prefer the racetrack pandemonium when Hi-Hat, the brothers’ disqualified horse, is assisted in bringing home the money. There’s a fine ballet scene thrown in, as well zis some good music that doesn’t last too long. If you like fun in the violent ward, here it is in its highest form. Marx admirers won’t have to be urged to go and see it.

may be alarmed into staying away. It is a family film, but in the finest and most inclusive sense of the term. Adults who go to see it will find it so absorbing that they will forget to watch their little ones, to see if they are appreciating the treat. And children, of course, will be entranced with it from first to last. This is the story of a spoiled obnoxious little boy who falls from a liner into the Atlantic, is rescued by a Portuguese fisherman and stays with the fishing fleet through the season.

Here he learns not only fishing and seamanship but good manners. The Atlantic itself takes a hand in his education. And through friendship with Manuel, the Portuguese fisherman, he gradually recognizes the value of bravery, goodness and simplicity. It’s beautifully screened, without either falseness or sentimentality, and superbly played by Spencer Tracy and Freddie Bartholomew. There have been some departures from the Kipling story, but they do not distort either the mood or intention of the original. This is the year’s best picture so far.

Call It a Day

ALL IT A DAY” must have looked 's->/ pretty good on paper; at any rate on the contract papers. It has any number of promising names in the cast Olivia de Havilland, Roland Young, Alice Brady, Ian Hunter, Anita Louise. It also has a considerable stage success behind it.

But somehow the film version of English family life doesn’t come out very strongly in the developing solution. The young people involved—the daughter in love with a portrait painter, the pre-adolescent in love with Dante Gabriel Rossetti seemed rather overwrought. The grownups— except Alice Brady—seemed rather too gentle and nice. And everyone talked and talked and talked. Like the romances involved in the story, ‘‘Call It a Day" is polite and high-class and doesn't quite come off.

Thunder in the City

'“THUNDER IN THE CITY” had some good names too —Edward Robinson, Nigel Bruce and Constance Collier. Edward Robinson particularly can be depended on. as a rule, to keep a picture alive and moving. He couldn't keep this picture moving, however, though lie worked at it hard enough, poor man.

It’s a story involving the English aristocracy, a Yankee promoter, and British and American high finance. By the time Mr. Robinson got through selling the British public stock in an African mine that had lain dormant for sixty years, he seemed all worn out, and so did we. In fact we felt like going to the ladies’ dressing room and lying dormant, too, for a long time, recovering from the effects of so much energy wasted.

SLAVE SHIP” is spectacular sea-melodrama, good in some respects, weak in others. The photography is excellent— particularly the brutal but highly dramatic shots of the slaves in the hold of the Albatross—and the story moves rapidly and excitingly in the adventure sequences, though it slows down to a crawl during the love episodes.

The hero (Warner Baxter) has been a slaver, boy and man, all his life, until he meets a beautiful and high-principled girl (Elizabeth Allen) who is horrified when she discovers how her husband makes his living. He wants to abandon it, but he is held to his profession by his bad old associates (including Wallace Beery and Mickey Rooney). The result is mutiny,

siege, fire, bloodshed, and all the other major excitements of life at sea. “Slave Ship” is a combination of hokum romance, fair acting, good melodrama, and superb camera work.

TNICK POWELL is the hero of “The Singing Marine.” buttoned to the chin in a natty naval uniform and looking, as usual, like a choirboy with more worldly experience than is good for him. Doris Weston, a nice girl with a chubby smile, is the heroine; and Hugh Herbert, living as usual in a world all his own. is a contract manager who goes about borrowing trouble on behalf of his clients. He and Lee Dixon, the talented and engaging tapster, a Chinese quartet and a boy with a harmonica. have enough to do to make the picture worth while, even for people who don't wholly enjoy the Powell cuteness.

“The Singing Marine” is the usual story of the cocky young man who acquires a swelled head with success, loses his friends, and in the end turns hero and gets them all back. It’s an old line, but this time it's strung with a lot of new talent.

Under the Red Robe

T TNDER THE RED ROBE" has nothing very new by way of story— it’s the one we all know about a beautiful high-born heroine and a reckless adventurer. carrying on their romance under the shadow of plots and counterplots evolved by Cardinal Richelieu.

Raymond Massey is impressive as the cardinal, kept busy brooding mischief, ordering arrests, and signing death warrants. He and Conrad Veidt give the picture style; and the lovely French star, Annabella, gives it beauty. But the major honors go to Victor Seastrom, who has directed it with a fine sense of both the pictorial and dramatic values of his material. It’s a very handsome production. continuously exciting and well acted. Worth seeing.

Elephant Boy.—The Flaherty photography, the new child star, Sabu, and any number of elephants, make this a picture to be seen, especially by the young.

Parnell.—Clark Gable on Home Rule for Ireland; which doesn’t quite seem to be his field. A serious, handsome production, but not much fun.

This is My Affair.—Bank looting under the McKinley administration. With Robert Taylor, Barbara Stanwyck. Good melodrama.

They Gave Him a Gun.—War and gangster film with a love triangle involving Spencer Tracy, Franchot Tone, Gladys George. War, it seems, doesn’t do anybody any good. Neither does love, in this picture. Fairly exciting, but it needs compression.

Seventh Heaven.—For young people in love. Others may be embarrassed by the continuous courting of James Stewart and Simone Simon.

Night Must Fall.—First-class thriller with Robert Montgomery in a new mood, and not one to be trifled with. Don’t take the children. Recommended, however, for adults.

Love From a Stranger.—Another little excursion into the psychology of murder. With Basil Rathbone as the killer and Ann Harding as the selected victim. If you like this kind of thriller, it’s well done.

A Star is Born.—Private life in Hollywood, all in technicolor, with fine performances by Janet *Gaynor and Fredric March. Recommended.

I Met Him in Paris.—Claudette Colbert, Melvyn Douglas and Robert Young involved in winter sports and love. Brightly written, acted and directed. Recommended.

The Good Old Soak.—Wallace Beery in trouble again with his family. Fair.

Fifty Roads to Town.—Love in a deserted summer cottage. Some familiar problems — including the one about where the heroine is to sleep—put together briskly and on the whole satisfactorily. Ann Sothern and Don Ameche. 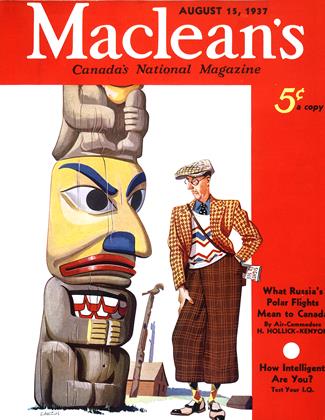