MORE THAN 100.000 persons die in Canada yearly, of whom less than 2,000 are classed as dying of old age the natural, unhindered running down of life’s machinery.

Nearly 7,000 die violent or accidental deaths. The remainder, including some 15,000 babies, die of disease.

The Great War killed slightly more than 60.000 Canadians. In a like period, disease in this country accounts for nearly 400,000 deaths. About 100,(XX) or so of our countrymen were disabled by the War, but in any single year almost 200.000 Canadians are continuously disabled through sickness and disease.

Medical science declares that about half of all disabling diseases are preventable, and that about one third of all deaths are postponable. Hence, 1(X),000 citizens are disabled annually unnecessarily and more than 30,000 Canadians die before their time.

Diseasesof the heart and arteries sweep away nearly 25,(XX) persons annually. Cancer and pneumonia more than 11,000 and 7.(XX) each, respectively. Diseases of infancy, nephritis, tuberculosis, influenza and diabetes nearly another 25,(XX).

It is estimated that two per cent of our population is always too sick to work. In one year. 750,000 Canadians spent nearly 15,000,000 collective days in hospitals. What does that mean?

That about 21,(XX),(XX) working days were lost by sick adults.

And what are we doing about, it?

Yes, yes we know. We’ve got fine hospitals, for which we pay nearly $70,000,000 yearly for purely institutional costs. We pay through the nose for doctors, nurses, medicine, etc. Why, no country looks after its sick better than we do. It’s almost a fetish with us.

And that is the point. Huge sums are not spent on our health, but on our lack of it. We don’t start to spend money until our health is gone. Not until we’re running a temperature, or come out in spots and are ready for the stretcher, do we lift a finger to do anything about it.

Slum conditions have been one of the greatest disease-spreading agencies in urban areas. Especially in the case of tuberculosis. Despite this recognized fact, and the Dominion housing scheme, little money so far has been spent on slum clearance.

The Animal Contagious Disease Act sets forth stiff regulations for the clean and comfortable housing of livestock, disinfecting, inspection, etc. But not until a year ago did Toronto, for instance, bring in an effective bylaw defining what a sanitary dwelling for a human was.

Practically all the money paid out in the interests of cattle and other farm animals is in a sense for preventive measures—for when our livestock get sick everybody hears about it.

But as for ourselves and our families? We have made progress but we’re still spending only seventy cents per capita annually on disease prevention.

SO FAR WE have accepted without

question the premise that many diseases can be prevented, that with vaccines and antitoxins, pasteurization of milk, pure drinking water, a whole range of communicable diseases can be wiped out.

How true is that?

Our best answer is what has already been done in this direction.

The first really serious drive in the cause of disease prevention came in the time of Napoleon, when Jenner discovered smallpox vaccine. Napoleon’s adoption of vaccination for his army was a potent factor in his military victories often forgotten by the historian. We sometimes forget how dreadful smallpox used to be. In the eighteenth century it was estimated that one quarter of mankind was killed, crippled or disfigured by this one disease. Its effects on Montcalm’s forces had a great deal to do with Wolfe’s capture of Quebec. That it is no longer a plague, we owe to vaccine and rigorous public-health regulations.

The attack on typhoid fever was the next major publichealth victory. One-time terror of the city dweller, and not so long ago killer of more than 1,000 in a single year in Canada, typhoid in a recent year killed less than 300 in the Dominion, and in Toronto only two. 1 yphoid is said to be one of the most readily preventable diseases. It can be stamped out by efficient sanitation.

After the War, a drive was launched c" certain social

diseases. Special legislation was passed. Clinics opened from Coast to Coast. Canadian cities now show the lowest incidence of these diseases on the continent.

Science next went to the mat with diphtheria. Antitoxin liad already lowered the death rate, but was not a preventive. In 1929, the year toxoid was first used, there were

9.000 cases of the disease in Canada. Under toxoiding, this total was hammered down until in 1933 there were not many more than 2,000 cases. Deaths dropped from more than 2,000 to a couple of hundred. And in a city the size of Toronto, in a recent year, not one death occurred from this cause. By 1943 authorities hope to exterminate this disease completely.

Next comes tuberculosis. Some years ago we decided something had to be done and we did it—with tire result that, despite the fact that there is as yet no protective serum, the tuberculosis death rate in the last twenty-five years has been cut in half, and reduced thirty-six per cent in the last ten years. The drop, however, may not have been due solely to preventive measures. There has been a downward world trend in the incidence of this disease. In countries such as Mexico, where public health measures have not been aggressive, tubercular mortality has also shown a drop.

And bovine tuberculosis, once the slayer of childhood, has practically disappeared in cities where pasteurization of milk is enforced.

But all this, although showing what has been done and what we could do if we felt like it, is merely scratching the surface of disease prevention, the mere rudiments of the science of public health, compared with what we might accomplish.

We are more than holding infectious diseases in check. We could suppress most of them. Raw milk and impure drinking water are still two great carriers of disease. Raw milk is a proved carrier of every single infectious disease. In 1929 typhoid fever, carried via the milk supply to Montreal from a farm outside the city, resulted in 5,000 cases of the disease, 500 deaths, and a cost to the Quebec Government of millions of dollars. Since 1906, investigation shows, raw milk has been responsible for forty-eight epidemics in Canada.

And yet, in Ontario, of twenty-eight cities but eleven pasteurize all their milk-—and only thirteen towns out of 141. An estimated two thirds of the population drink raw milk.

AND ASIDE from infectious diseases, how are ** we faring? We reduce the toll of typhoid and a man lives to die of heart disease; we stamp out diphtheria and cut the mortality of diabetes, and the cancer belt becomes more populated.

One death of every four in the citizenry is ahead of schedule from diseases of the heart and arteries, a toll that has increased seventy-five per cent in the last twenty years.

Cancer, running a grim second, now claims more than a one-eighth share in the list of dead, and races on, cutting an ever-widening swath that has increased forty-five per cent in the last two decades.

And pneumonia, although reduced somewhat in the last few years, still strikes with abandon and holds its place as the third agency of death.

That’s where we stand at the moment regarding the deadliest of the death-dealing agencies. In subduing one disease, we have increased the number of persons who live to succumb to something else.

“Fifty years ago,” says Dr. John A. Oille, assistant professor of medicine at the University of Toronto, in the Canadian Public Health Journal, “half of the deaths occurred in young people and were due to infectious diseases, headed by tuberculosis . . . There has been a great decrease in diseases killing chiefly the young. About

“But,” Dr. Oille points out, “the mortality of all diseases

in the last fifty years has decreased only about ten per cent.

“The great problem facing medicine today,” he declares, “is cardiovascular (heart) disease and cancer . . . It is stated that diseases connected with high blood pressure account for more deaths than any other cause—something like 150 to 175 deaths per 100,(XX). It is, however, not exactly fair to attach all the blame to this one cause. To prevent hardening of the arteries would be almost to defeat the inroads of age. We would still have cancer to conquer. But on the average the span of life would be greatly lengthened- whether or not this is desirable.”

Assurance Co.. Toronto, has compiled a table showing the relative expectations of life at various ages in 1850 and 1930.

“An erroneous view.” declares Dr. Streight. “has been broadcast in the last decade that the expectancy of life had greatly increased since the middle of the last century. The fact is. the expectation in younger years is greater, owing to the lessening of child mortality, hut at the age of forty and after, the expectation remains practically the same in 1930 as in 1850.”

UST WHAT have we in the line of

toxoids, antitoxins, vaccine, etc? What diseases are we now able to combat in this way? Here’s the latest from our laboratories:

For prevention. Abscesses, boils, carbuncles. Yes, people die of carbuncles. There is now a toxoid for immunization.

Smallpox. Vaccine, which comes from eowpox, was discovered by Jenner in 1796. A definite immunity.

Infantile paralysis. Vaccine is still being used only experimentally. Works on monkeys. Not proven for humans and not distributed. There is, however, a substance which, used in the early preparalytic stage, has eliminated in many cases residual paralysis.

Tetanus. Toxoid for life protection, and antitoxin for quick immunity.

Botulism. Food poisoning—deadly. Three died recently of it in Ottawa. Botulinus antitoxin, if used in time, will save life. Protection—strict supervision of canning.

We may add to this list substances which have been proven to postpone death indefinitely in the case of diseases for which as yet there are no known preventives. These are, of course, insulin for diabetes, and liver extract for pernicious anemia.

AS FOR the health situation throughout Canada generally, we find that the Province of Saskatchewan, according to

the Dominion Bureau of Statistics, leads in the matter of public health progress, with the West as a whole far ahead of the East. Ontario leads in deaths from heart and artery diseases and cancer. Saskatchewan, with probably the youngest population, has the fewest.

Just what can be done with some effort is shown in the case of Toronto, which reduced its infant mortality rate sixtyeight per cent in twenty-five years. But it took a lot of high-pressure campaigning and health education.

In several provinces, especially in the West, legislative measures have been taken to further health programs. The Dominion Government, following a debate in January, 1935, decided to call a conference of all provincial ministers of health. There have been, so far, two such conferences of health ministers, and it has been under consideration to form a Royal Commission to investigate the whole question of illness, its costs and its preventability.

Health authorities are also urging the formation of a Dominion cabinet of health. But all these things are as yet somewdiat nebulous.

In the meantime, nearly a quarter of a million babies are born in Canada yearly. What of their future? 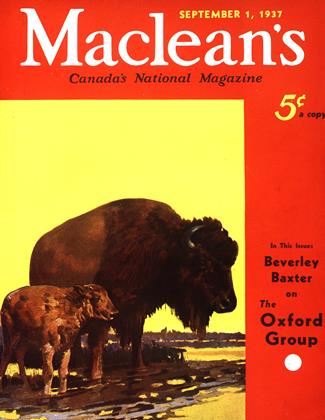