IN “It’s Love I’m After,” Leslie Howard turns the tables on himself and gives a broad burlesque of the Shakespearean actor and great lover who lives his art. He is a matinee idol here, irresistible to women, including his Shakespearean costar (Bette Davis) and a stage-struck debutante (Olivia de Havilland). As a favor to the debutante's fiancé, the hero tries to cure the debutante of her infatuation, but the natural result of his antics — all taken out of his touring repertoireis that she is more enchanted than ever. She continues to throw herself at his head.

So does his enraged but loyal leading lady. There’s a great deal of farcical involvement, but in the end the debutante is restored, completely ham-cured, to her own true love. The earlier sequences of “It’s Love I’m After” are funny and bright, but the story material, never very substantial, is spun out a trifle thin before the end.

LESLIE HOWARD continues his rather J surprising comedy career in “StandIn.” latest exposé of Hollywood and the film industry, lie’s a Wall Street banker here, a Mr. Atterbury Dodd, who goes to I lollywood to straighten out the affairs of the Colossal Film Co. Ten minutes after his arrival in the film city, a lively blonde (Joan Blondell) leaps into lus taxi, gives him a quick outline of her life and career and leaps out again, leaving behind her a black suede pump and her boardinghouse address. None of this distracts Mr. Dodd, who is oblivious to everything but banking figures.

The first part of the film is devoted to Mr. Dodd’s efforts to defrost the assets of the Colossal Film Co., the second part to the heroine’s efforts to defrost Mr. Dodd. I found the early sequences more entertaining, certainly more unfamiliar. There’s some very funny clowning at the expense of Shirley Temple prodigies, Hollywood boarding-houses, and glamorous stars. And there’s a wonderfully realistic description of the making of a St. Moritz blizzard, done apparently with cornflakes.

EBBTIDE” brings us a breath of Stevenson adventure, a typhoon, a Hollywood romance, and two outstanding performances by Oscar Homolka and Barry Fitzgerald. The whole thing has been dipped in the strong blues and browns of a new technicolor process. The technicolor still makes the human actors look strangely bronzed and unreal, but it was wonderfully becoming to the typhoon.

The story has to do with the adventures of three beachcombers— an English remittance man (Ray Milland), a derelict cockney (Barry Fitzgerald) and a demoted ship captain (Oscar Homolka). These three come into temporary possession of a plague ship and decide to annex it permanently. The film opens slowly but, once aboard the lugger, things begin to happen. A beautiful girl (Frances Farmer) comes out of the hold and shoots the captain. She has barely quieted down w’hen the typhoon

arrives. Ship and crew manage to survive the typhoon, but when they put in at a strange island they find themselves the guests of a religious homicidal maniac (Lloyd Nolan). The adventure sequences and the Homolka and Fitzgerald performances make the film worth seeing.

TT’S EASY to see why “Madame X” was such a stage triumph twenty-five years ago; in fact you can measure its success by the number of dramas that have since imitated it, especially its mother-love and courtroom climax at the end. The present version, with Gladys George in the title role, seems to indicate that Madame X, though still wonderfully active, isn't quite as young as she used to be. The old-fashioned lines and situations have been altered very little, and the staginess is so obvious at times that it’s a little difficult to take the difficulties of the unfortunate Paris matron very seriously.

Gladys George’s sturdy performance saves the film to a certain extent, and young John Beal is fiery and eloquent in the famous courtroom scene. Older moviegoers may still be able to shed a tear or two over Madame X and her troubles.

TANCER SPY” follows to a certain extent the familiar espionage formula; at least it has a beautiful undependable

TT SEEMS to be the rule at present that every top-ranking female star rates at least two screen heroes to a picture. Thus “Angel” provides Marlene Dietrich with double romantic support—Herbert Marshall and Melvyn Douglas. Herbert Marshall is the husband—a brilliant politician who can’t stop reading foreign dispatches long enough to make love to his beautiful wife. Melvyn Douglas is the appreciative interloper,

The familiar plot provides a certain amount of surface agitation, but no very profound emotional upsets. The policy of the three central characters throughout is to ignore an awkward situation till it is forced on their attention; then to go right on ignoring it. If “Angel” isn’t great emotional drama, it is smooth entertainment. Directed by Ernst Lubitsch, the picture, like its star, is beautiful to look at and wonderfully dressed up. 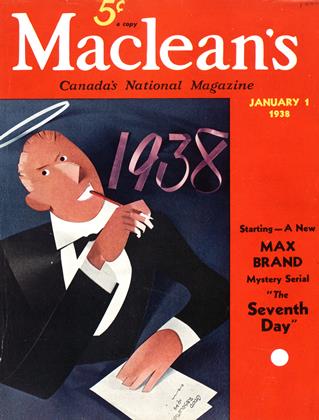