NOTHING SACRED” is a gay and lively study of life in New York City, its purpose being to show that Manhattan with all its experience isn’t really any smarter than the next town. A New York reporter (Fredric March) turns up a story of a radium victim, a small-town girl doomed to death in six months. Seeing the possibility of a scoop, he goes to Vermont to bring the lovely victim back to Manhattan and break the hearts of his fellow townsmen. It seems an excellent idea to everybody, including the girl (Carole Lombard) who is suffering from nothing worse than a wrong diagnosis; in fact has never felt better in her life.

Ben Hecht, who wrote the story, has used this as a basis for a brilliantly concocted burlesque of New York with its wonderful great heart and its slightly addled head. The principals are excellent as usual, and have the additional fine support of Charles Winninger and Walter Connolly. The whole thing is in technicolor —improved technicolor of course, but it still does queer things to the human complexion, giving it at times the hue of an inferior brand of canned salmon. “Nothing Sacred” doesn’t really need technicolor; it’s gay and entertaining enough without it.

THIS PICTURE has to do with one of those fine old New York families who dig themselves in behind their brownstone fronts after all the rest of the neighbors have moved over to Park Avenue. Surrounded by night clubs, hot spots and swing orchestras, the family continues to fight back for twenty-five years—a long time, even on the screen. Since Zasu Pitts is one of the carriage folk involved, it’s not too serious. After a quarter of a century’s resistance. Miss Pitts’ refinement breaks down, and she steps out on a night-club floor with the neighborhood boys (Jack White and Sid Silvers). Dorothy Peterson and Ian Hunter are the other old-frontier folk involved, and a great part of the film is given over to their fidgety protests against change. While it has its bright moments, there’s rather more fuss than fun on the whole about “Fifty-Second Street.”

THIS PICTURE has to do with newspaper life, the strange actions of an underground religious sect, and the marital troubles of reporters. The picture suffers from a lot of things, but chiefly from overcomplications and casting trouble. George Murphy, whose talent happens to be dancing, has to spend all his time solving murder mysteries. Josephine Hutchison, a quiet sensible girl without a trace of city-room bounce, is cast as a lady reporter. The plot includes a peculiar and sinister mystic called Brother Nameless, and a panicky middle-aged female who writes messages on a slate. There’s a counterplot besides, involving a two-timing wife and a philandering city editor.

The problems of all these oddly assorted people are eventually worked out—one gets fired, one gets murdered, two get divorced, one gets hanged, and two find happiness together. “The Women Men Marry” seems to have been concocted chiefly to write off a number of players’ contracts without much regard for their talents.

THE BARRIER” brings Rex Beach’s tale of adventure in the Yukon back to the screen, with pretty Jean Parker in the heroine’s role. It’s still full of action and romance, and big and beautiful as all outdoors. But it’s beginning to show some old-fashioned touches— for instance, the hero’s nervous agitation at the notion of going camping unchaperoned with the heroine. Screen heroes, especially when they are army lieutenants, seldom have such formal notions nowadays.

Jean Parker’s performance, too, suggested Beth of “Little Women” rather more than it did a belle of the Yukon. Fortunately the cast included Leo Carrillo, Robert Barrat and Otto Kruger, all of them good out-of-doors performers. Rapid action, good character work and some magnificent mountain scenery, make the picture worth seeing. Though not outstanding, it can pull more than its weight on a double bill.

THEY WON’T FORGET” is a grim and memorable picture, a study of regional hatred in the deep South. A Yankee schoolteacher is accused of the murder of one of his pupils, a girl in a Southern business school. He is tried and convicted, entirely on circumstantial evidence and largely through the efforts of an ambitious district attorney. Then before the forces of justice can reach him, he is snatched from a train and lynched by a Southern mob.

The story, brilliantly directed by Mervyn Leroy, is worked out in terms of crime-and-courtroom drama. It seems rather unsatisfactory in the end that the picture gives no clue to the real criminal. But apparently the producer of the picture wanted to make it clear that the real villain of the piece wasn’t the murderer but the mob itself. “They Won’t Forget” is another of Warner Brothers’ film experiments—a story with an unfamiliar approach and a practically unknown cast. It may not be popular with a large circle of movie-goers. But no one who sees it is likely to forget it.

THE LAST GANGSTER” has at least one brilliantly handled sequence—the one describing the transportation of a carload of convicts across the continent to Alcatraz. There is also, for those who like it, a grim description of life in the penitentiary, and the latest mechanical gadgets for keeping the inmates in order. As a whole, the picture is a curious mixture of savagery and sentimentality. The last gangster (Edward G. Robinson), after a career of successful terrorism, is jailed on an income-tax charge and sent down for ten years. Here, working year after year in the institutional laundry, he broods on his return to society and his plan to shoot his beautiful wife and regain possession of his young son; for, though a thoroughgoing thug, he is a doting father.

The story works out eventually to a happy ending— that is, a happy ending for all the good people and a general massacre of all the bad ones. Edward Robinson is tough and strenuous as the gangster, and the film has its tense moments. But the plot is labored and the ending is unconvincing. It looks as though crime weren’t going to pay any more, even at the box office.

It’s Love I’m After.—Love and the troubles it brought, off-stage and on, to Leslie Howard, Bette Davis and Olivia de Havilland. Amusing but rather drawn-out comedy.

Lancer Spy.—Espionage and love and some interesting doings in Potsdam during the War. Dolores del Rio, George Sanders and Joseph Schildkraut. The best spy film in a long time.

Stand-In.—How a Wall Street banker tried to straighten out Hollywood, and how Hollywood straightened out the banker. With Leslie Howard, Joan Blondell. Lively entertainment.

Ebb Tide.—Robert Louis Stevenson’s story of romance and adventure in the South Seas, all turned out in technicolor. Ray Milland and Frances Farmer are the principals, but Oscar Homolka and Barry Fitzgerald do the real work. Good entertainment.

Farewell Again.—Life on an English troopship. With Leslie Banks, Flora Robson, and a good English cast. A family film and recommended.

The Awful Truth.—Trouble in the younger married set. A fast and amusing comedy, with Irene Dunne and Cary Grant. Recommended to adults.

Double Wedding.—More rowdy comedy than you could shake a slapstick at. With Myrna Loy, William Powell. Not one of the Loy-Powell best.

The Life of Emile Zola.—The best of the screen biographies. With a superb performance by Paul Muni. Highly recommended.

Victoria the Great.—Victoria from her accession to her Diamond Jubilee. With fine performances by Anna Neagle and Anton Walbrook. A family film and highly recommended. 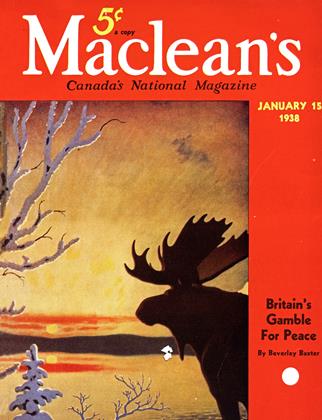