In that article, Colonel Drew made a critical analysis of the contract made by the Canadian Government with the firm of John Inglis Company, Toronto, for the manufacture of Bren machine guns, and set forth a series of questions which, in the public interest, he declared should be satisfactorily answered.

The September 1 issue of Maclean's was in its readers’ hands on August 25.

That night, the Department of National Defense issued to the press a statement authorized by the Minister, Honorable Ian Mackenzie, asserting that Colonel Drew’s statements were incorrect.

On August 26th, Colonel Drew replied to the Minister, reiterated his statement of the case and challenged the Minister to provide a judicial enquiry before which he would have the opportunity to substantiate what he had written.

These statements and summaries of the original Maclean's article were published by daily newspapers throughout Canada.

Editorial comment reflected nationwide public interest. With few exceptions newspaper editors in all parts of the country urged that a non-political enquiry should be held without delay.

On August 31, the matter was discussed by the cabinet in council. The Prime Minister, indisposed, was not present. That night the Minister of Defense conferred with the Prime Minister at the latter’s summer residence.

On September 1, the Minister of Defense summoned representatives of the press and issued the following statement:

“When the Government two years ago embarked* upon a program to modernize and mechanize the defense forces of Canada, it realized that the expenditure of large sums of money would be involved in the purchase and manufacture of essential material and supplies. It was felt that every possible precaution should be taken to eliminate the possibility of undue or unreasonable profits.

“Accordingly, an interdepartmental committee was set up composed of permanent officials from separate departments of Government whose duty it was to examine, study and pass on important contracts emanating from

the Department of National Defense in cases where competitive bidding was not feasible.

“In addition there have been inserted in such contracts two other stipulations to protect the public interest:

“1. To prevent anything which might give rise to stock market manipulation.

“2. To prevent any Member of Parliament or of the Senate having any direct or indirect interest in these contracts.

“During the last session of Parliament on two occasions I suggested that these contracts might well be submitted to the Public Accounts Committee. However, that was not done.

“Since that time one of them has been assailed in a magazine article. Upon reading that article I immediately stated that an investigation would be held.

“Yesterday I took this up in Council and, while ordinarily the Public Accounts Committee of the House of Commons is the appropriate body to examine such agreements, I recommended that in this case, on account of the critical world situation and the extreme national importance of keeping public confidence in the vitally necessary work being carried out by my department, there should be the least possible delay and, therefore, that a judicial enquiry which could be set in motion immediately and without awaiting the assembling of Parliament would be preferable.

“This view was concurred in by the members of the Government who were present at Council and was subsequently heartily endorsed by the Prime Minister, who was good enough to discuss it with me at Kingsmere, even although indisposed.

“There will, therefore, be a judicial enquiry directed by a judge of one of the higher courts whose name will command universal confidence and whose appointment will be announced within the next few days. He will have full power and authority to examine into every phase and feature of the contract in question.

“In this way the greatest possible expedition will be ensured and an independent judicial opinion obtained upon the matters in dispute.

“All officers of the Department will be available to give evidence if required, including the Minister.

“It is only fair for me to state that my opinion has not altered in the very slightest—that this contract is fair and reasonable and in the public interest. It is the opinion of the officials of the department that the Company is pro-

ceeding with its undertaking in a manner which gives every assurance that it will faithfully adhere not only to its time schedule but to each and every one of the obligations undertaken by it.”

That announcement was made exactly one week after publication by Maclean's of Colonel Drew's original article.

Before this, the October 1, issue of Maclean's is out, the judge who will conduct the enquiry will have been named and the terms of reference stated.

Therefore no-comment can be made by this publication concerning the matters in dispute.

However, there are two points which we feel can properly be mentioned.

The first point concerns an earlier statement made by the Minister of Defense that Colonel Drew’s article was “wild and irresponsible,” and a statement by Defense Department officials that the article was “part of a campaign by ambitious politicians.”

It is obvious that the Dominion Cabinet would not have sanctioned a judicial enquiry if the article had provided no factual grounds for such action.

Maclean's would have taken no part in the matter had it not been fully satisfied that it was acting in the public interest.

The fact is that Maclean's itself, after studying the contract, asked Colonel Drew to make investigation.

Colonel Drew was chosen because he had been a regular contributor to Maclean's since 1928; because he had written frequently on the manufacture of armaments; because he had held the important judicial position of Master of the Supreme Court of Ontario, and also that of Ontario Securities Commissioner.

The second point is this.

The fact that the Government so speedily granted an enquiry in response to the action of Maclean’s and of the press generally is a tribute to the form of government under which Canadians live.

It could not have happened in Germany, in Italy or in Russia.

Under no dictatorship would any such questioning of an administrative policy be possible.

Under no dictatorship would those in power agree to a public enquiry in response to the demands of a press acting in the public interest.

Under Canadian institutions these things did happen.

That, we think, is worth stressing. 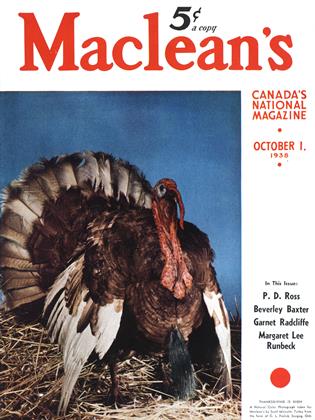