THE MAN who reported this occurrence swears it is true. He gave us names and places and everything. We aren’t using them, because—well, we just don’t know.

A university professor of Hamilton, Ont., has a wife and small baby. The other night the wife went out to a bridge party. The professor stayed at home to mind the baby and do a spot of work.

In the middle of the bridge game, our informant asserts, the wife was called to the phone, to find a very agitated professor on the other end.

“Good heavens!” cried his wdfe. “Have you called the doctor?”

The professor said, yes, he had called the doctor.

“Has the doctor got there?”

“I am using my fountain pen,” said the professor soothingly.

Anyway, that’s what our informant says he said.

There is a spirit of good-fellowship and eagerness to help one another among Parade readers that positively makes us glow with pride at regular intervals. Just a couple of issues back we were able to inform the Rev. J. E. Wiekenden, of Kingston, N.B., exactly where he could find a copy of the out-of-print ”Scovil’s Shorthand,” which he needed. Now comes Miss Florence B. Cruikshank. of Saint John, N.B., with a word of comfort for Motorist Bill Didlos, of Huron County, Ont., whose night-time misadventure with a furry animal which he took to be a dog but turned out to be a skunk, was reported in the August 15 issue. Faithful followers will remember that Mr. Didlos, aiming a kick at the furry animal, suffered an exceedingly uncomfortable aftermath. He buried his clothes. The question was. what could he do with his car?

Miss Cruikshank sends advice to the effect that if Mr. Didlos, or any other automobilist similarly afflicted, will leave his car overnight in a public garage, or any garage housing two or more motor vehicles, the all-pervading gasoline odor will absorb all trace of what Miss Cruikshank cunningly describes as. “the furry animal’s gift.” Miss Cruikshank says she knows this is true because she tried it herself in the same circumstances this very summer as ever was -and it worked.

Jimmie McGuire writes Parade with becoming modesty that he is "only the copy boy" on the Edmonton Bulletin. But he’s a mighty bright copy boy. and if the publishers of the Bulletin don’t watch out. Jimmie McGuire is going to grab the paper right out from under their noses one of these years. Jimmie ran across a typographical error in a headline in the morning edition of the Bulletin a few days ago. The heading was over a report on the philosophy of a Guelph, Ontario, woman who had achieved the ripe age of 108 years. Fifteen minutes after the newspaper had reached the office, Jimmie McGuire had it in the mail to Parade. Not only in the mail, but in the Air Mail! The heading:

Cynical admonition, posted in an elevator in the Vancouver courthouse, immediately above a formal warning to prospective brides and bridegrooms that eight days notice is required by law before a marriage license can be issued :

In the domain of good Doctor Aberhart strange things continue to happen, although you don’t hear so much about them these days, perhaps because even stranger things are happening in other lands across the seas. But the thing that happened to one loyal Albertan merits attention, even while we wonder what queer thing Herr Hitler is going to do next. This Alberta citizen, after twenty-five years of successful practice as an electrician, was required under an Aberhart statute to pay a fee of five dollars in order to take an examination to establish legally his proficiency in the craft he had followed for a quarter of a century. The electrician paid his five dollars, wrote his examination, then sat back patiently to await the result.

It didn’t take very long. In the course of a week or so he received a neatly printed certificate. The document stated that under the constituted authority of the Government of Alberta, the gentleman who had been an electrician for twenty-five years was now properly, legally and officially qualified to serve the sovereign people of Albertaas a bartier !

If you happen to be around the City Hall of Stratford, Ontario, and bump into a gentleman with a very red face who seems unduly anxious to avoid public attention, chances are that will be Mr. Arthur Orchard, the caretaker. And if you run across Mr. W. H. Riehl, who is city engineer and also city weed inspector, he will be able to explain just why Mr. Orchard is acting sort of shy and retiring these days. Mr. Riehl will chuckle, but you will not get any chuckles out of Mr. Orchard.

Mr. Orchard is an amateur horticulturalist. His special pride this summer were the grand flower boxes filled with a profusion of beautiful plants distributed about Stratford City Hall. Mr. Riehl was interested in those flower boxes, too, and that is why Mr. Orchard, opening his official mail one morning a little while back, was astounded, amazed and indignant to discover this official notice, signed by Mr. Riehl:

Please be advised that under the Weed Control Act you are required to destroy within the next two days the following noxious weeds or weed seeds: Ragw eed in flower boxes on City Hall steps.

There is a Miss M. Mitchell teaching primary school in

The Pas, Manitoba, who has two pairs of twins in her class

this session—Billy and Patsy Lyons, and Denny and Donny Lamb. Daddy Bill Lyons streamlines boats in his canoe factory at The Pas, and proud Papa Tom Lamb raises flocks of muskrats on his ranch—he says it is the largest muskrat farm in the world - at near-by Moose Lake.

The operative submitting this interesting bit of gossip remarks that Miss Mitchell “has reason to hope for a peaceful school session because of the ancient Biblical prophecy about lions and lambs lying down in amicable association.”

Our correspondent is a clergyman.

A bank manager in a small Ontario town, who begs that we preserve his anonymity, tells us this one.

“A farmer customer,” says he, “came into the bank and told me that he wished to get a loan under the Governmentsponsored Home Improvement Plan. So I proceeded to cross-question him in order to elicit the information required on the application form. Everything went well until I came to the part in which had to be stated the actual improvements that wrere to be made with the proceeds of the loan. I asked the customer what improvements he had in mind, and whether they were on his house or on the farm buildings. He answered that rightly speaking the improvement was to be on the entire farm. This w'asn’t quite clear, so I specifically asked what he was going to do with the money.

“After I had got a grip on myself, I had to explain that, while lifting the mortgage was definitely an improvement, unfortunately it did not come under the terms of the plan.”

We wouldn’t have believed there w'ere any real oldfashioned timid girls left. Nevertheless, we have it on the authority of a trusted operative living in Saskatoon that a shy young lady of that strictly modern city, who recently embarked upon the adventure of her first Pullman journey, was obsessed by a fear that rude men might spy upon her in the sanctity of her lower berth. Soon after she had retired she heard in the aisle outside the sound of heavy masculine footsteps. As the steps reached her section she clutched frantically at the buttoned curtains. The footsteps halted, and, after one of those moments that seem a year, the lady mustered up her courage and said in what she hoped were stern, commanding tones: “Will you please go away, this instant!”

A bored voice that could belong only to a tired and disillusioned travelling salesman, replied: “Lady, I’ll be glad to, if you’ll let go my coat.” 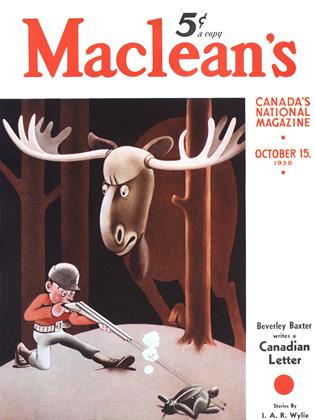