Too Hot to Handle

TOO HOT TO HANDLE” capitalizes on the Clark Gable-Myma Loy partnership that was so popular in “Test Pilot.” Clark Gable is an alert and daring newsreel cameraman here, and Myrna Loy is a beautiful aviatrix who skips about from continent to continent, sometimes turning up in China with a load of cholera serum, sometimes hopping off to South America to look up a brother lost in the Amazon jungle.

Naturally the heroine, with her news value and face value, is the answer to a newsreel photographer’s prayer; but Cameraman Gable gets a bad start when, in taking her picture in China, he makes her wreck her plane. They love and quarrel, and the picture, rushing along at express-train rate, arrives finally, in a furious burst of improbability, at a voodoo celebration in the South American jungle. "Too Hot to Handle” is the sort of wild melodrama that wouldn’t fool a kindergartener, but is fine entertainment for grownups just the same.

"DOR THE first time in their screen -L career, the Marx Brothers are tied down to someone else’s script instead of making up their own as they go along. "Room Service” is the screen version of tho popular Broadway comedy, and while it is large and wild enough to accommodate even the Marxes, it does hold together as a plot which the boys don’t quite succeed in kicking into splinters.

This is the story of an impresario (Groucho Marx) who, without the price

I Am The Law

W/ITH the Hines trial the gangster * ^ film has run into another of its cycles, this time with the special prosecutor as hero. Edward G. Robinson is the prosecutor in “I Am The Law”—a busy little professor of law who turns public crusader and sends the city to the cleaners. Naturally, Edward G. Robinson isn’t like any professor ever seen on any college campus; but, after all. this is the movies. There's a wild plot involving gang wars, terrorized tradespeople, tight-lipped killers, and smooth, sinister higher-ups.

It’s all fairly familiar, but the story takes so many hairpin turns and moves at such a breakneck speed that it’s highly exciting entertainment. Edward Robinson gives one of his best barnstorming performances, and Otto Kruger, as the respected citizen and real villain of the piece, underplays his part smoothly. Between them they make “I Am The Law” one of the most effective and vigorous gangster films of the new series.

T—TOLD That Co-Ed” should bring a lot of happiness to people who don’t take their football too seriously. Here we have John Barrymore as a wild state’s governor who plays football with politics and politics with football. Apparently Mr. Barrymore has decided to settle down to a merry old age of clowning, without worry-

of a ham sandwich let alone a production, manages to dig himself into a hotel along with his assistants (Chico and Harpo) and a company of twenty-two. The resulting chaos is well up to the Marx standard even if the brothers didn’t think it up themselves. The film marks several other departures from tradition. There are no musical lovers, and Harpo’s harp. Chico’s piano and Groucho’s Madame Dumont

ing what becomes of his art. He is assisted here by a couple of man-mountain wrestlers, and by Joan Davis as a football star who specializes in drop kicks. They’re all funny in a muscular sort of w-av. but it’s the wild Barrymore touch that gives “Hold That Co-Ed” its distinction.

The picture has its gentler romantic sequences supplied by Marjorie Weaver as the governor’s secretary and George Murphy as the college football coach. The love story is amiable but routine, and the picture could have got along just as well —perhaps even a little better—without it. “Hold That Co-Ed” isn’t football and it isn't college, but thanks to John Barrymore it is highly acceptable college football comedy, with some lively political satire thrown in.

HTHE latest Bing Crosby film turns out to be a nice homey picture about a widowed mother (Elizabeth Patterson) and her three boys (Bing Crosby, Fred MacMurray and Donald O’Connor). Fred MacMurray is the serious, hard-working member of the family, Bing is a shiftless lad with a taste for horse racing, and Donald O'Connor is the baby, a child actor with a sharp little face and a grownup range of emotion. In addition there is Ellen Drew, a pretty newcomer. She’s engaged here to the oldest son, but has the peculiar notion that she won’t marry unless she can live with all her in-laws.

Everything turns out happily of course. Bing’s horse comes home, the three boys get a singing contract, the heroine gets her chance to settle down with the entire family. There are two or three songs, none of them outstanding, and the whole thing is easygoing, pleasant, and not particularly remarkable.

THE RACKET BUSTERS” also deals with gangsters, terrorized shopkeepers, special prosecutors and malignant higherups. Like “I Am The Law,” it has plenty of violence and pace, but something seems to be lacking—possibly Edward G. Robinson. Walter Abel is the public prosecutor here and, while he’s a competent, welldressed, honest-faced crusader, he doesn’t give the picture the push and liveliness of the Robinson film. Humphrey Bogart is the villain in a rather typed role, and George Brent plays a truculent truck driver caught between the rackets and the law. There’s a sinister subway murder, and trucks rumble, crash, ignite and drive through plate-glass windows; so it isn’t exactly a picture for nervous old ladies. Gangster-film fans, however, won’t find anything very new or startling about it.

Marie Antoinette.—Norma Shearer in an elaborate and often beautiful presentation describing the life of the tragic Queen of France. With Tyrone Power. Recommended.

You Can’t Take It With You.—Frank Capra’s screen version of the Broadway comedy, with a top cast, including Jean Arthur, James Stewart, Lionel Barrymore. Recommended.

Letter of Introduction.—Adolphe Menjou and Andrea Leeds in a sad little father-anddaughter sketch which is much brightened by Charlie McCarthy and his Mr. Bergen.

Carefree.—Fred Astaire as a tap-dancing psychoanalyst and Ginger Rogers as his victim. They get in some good dancing and comedy between office conferences, but this film isn't one of their best.

The Crowd Roars.—Robert Taylor as a ring battler gets a thorough mussing-up. With Maureen O’Sullivan. Well-handled melodrama.

Four Daughters.—Nice family atmosphere, much braced up by the newcomer. John Garfield. Rosemary, Priscilla and Lola Lane, plus Gale Page, are the daughters.

The Amazing Dr. Clitterhouxe.—The doctor looks at crime. A gangster film with a new angle. With Edward G. Robinson.

Valley of the Giants.—Technicolor version of the Peter B. Kyne story that is the granddaddy of all lumber melodramas. With Claire Trevor, Wayne Morris. Plenty of excitement.

Gateway.—Don Ameche as a war correspondent and Arleen Whelan as an Irish colleen. in a mixup with the immigration department. Improbable melodrama.

Boy Meets Girl.—Hollywood kidding Hollywood and very funny, though a little late in the series. With James Cagney, Pat O'Brien.

The Crowd Roars.—Ring melodrama, with Robert Taylor as a light heavyweight champion and tough as anything. Exciting.

Lord Jeff. — Freddie Bartholomew and Mickey Rooney find themselves in the Barnardo Boys’ Home. Interestingly handled and worth while. 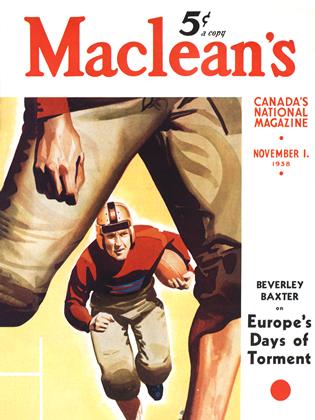