SUEZ” is a remarkable piece of historical production, with, however, considerably more emphasis on production than on history. Darryl Zanuck lias set himself here to give us screen entertainment rather than blackboard exercise; and on that basis movie-goers will get everything they paid for. There is romantic Tyrone Power as the Count de Lesseps. builder of the great canal between the Mediterranean and the Red Sea; beauteous Loretta Young as the Empress Eugenie; Annabella as a desert gamin; and. for good measure, a terrific spectacle involving the dynamiting of the canal by the Arabs and a desert simoon, a combination of whirlwind and dust storm that will leave grit in your teeth for at least a week afterward. There’s a sprinkling of the great people of the time as well Disraeli. Louis Napoleon, Franz Liszt, Victor Hugo.

Moving among these impressive figures. Tyrone Power seems very much a boy. and the studio efforts to age him with greying hair hardly succeed in making him the mature and resolute man of affairs he is supposed to be. From the technical angle, however, “Suez,” with its spectacles of simoon and sabotage, is undoubtedly a masterpiece. The settings, too, including Napoleon’s court, the court of the Egyptian viceroy and panoramic glimpses of the canal, have scale and splendor.

REMEMBER Sabu. the engaging lad - who starred in “Elephant Boy”? Sabu has now passed under the tutelage of Alexander Korda, and in “Drums” he gives a repeat performance as brilliant as his first. This is the Kiplingesque story of brave men doing their duty on the Empire outposts, much harassed by native plotters who don’t appreciate the benefits of colonization. Sabu is an Indian prince, loyal to England, and the native plotters are headed by that gtxxi British subject, Raymond Massey.

“Drums” employs all the familiar devices of Empire melodramatics; native uprisings, plots and counterplots, stern gallantry and good evening clothes in the

face of danger. It all adds up to remarkably good entertainment, full of excitement, suspense and color. Korda has gone far afield of the studios for his settings, and we have here the palace of the Mehtar of Chitral as well as the Khyber Pass, photographed for the first time in actiondrama and wonderfully impressive in brilliant technicolor.

'“piHS picture is a skittish comedy touching once more on the film industry and its peculiar ways. The heroine, Annabel (Lucille Ball), is a movie star, victim of one of those fanatical press agents who are willing to make any sacrifice to get their client on the front page, as long as their client makes the sacrifices. Annabel’s sacrifices include doing a term in the reformatory, taking a job as a housemaid, and getting involved with kidnappers. Jack Oakie co-operates heartily as the press agent. You will probably come across Annabel again, as it is reported that the producers intend to extend her affairs into a series.

Five of a Kind

'“PHIS IS the third feature in which the Dionne quintuplets have appeared and, though they’re perfectly at home in front of a camera, they’re no nearer than they ever were to taking themselves seriously as movie stars. They dance and sing in their latest film; but when they dance it's every quint for herself, and their singing is carried on in five different keys. Most of the time they just extemporize in a way that would probably drive a serious

instructor of infant dramatics crazy. In fact they 're charming, and it is to be hoped nobody will ever catch them and teach them precision routine and script-andstudio emotions.

The story has to do with rival reporters and radio broadcasters, and Claire Trevor and Cesar Romero wrangle not very happily over plots and counterplots involving the miracle children. As usual Jean Hersholt is present as Dr. Luke, Slim Summerville as the town constable, and John Qualen as Papa Dionne. It’s the twenty minutes in which the quints themselves are before the camera that make the picture worth seeing. And never mind the story.

A/fEN \\ ITH WINGS” has the history -*-*-*of aviation as its background, and the love triangle of a girl and two flyers as its story. The background itself is new and absorbing. Beginning with the Wright Brothers’ flight from Kitty Hawk in 1903, it follows the history of flying down to the present day. The story, which is more familiar material, also comes down through the years. It tells of the childhood love of two youngsters for the small daughter of a pioneer flyer who crashes in his first flight. The girl (Louise Campbell) grows up to marry the reckless lad (Fred MacMurrav) who prefers flirting with death in the clouds to settling down quietly on the ground.

The situation isn’t a new one. but the picture as a whole is highly dramatic, partly because of the skill and swiftness of William Wellman’s direction, partly because there is so much excitement and sheer visual beauty in flight itself. In technicolor, carefully toned to he dramatic without being too gorgeous.

probably the hardest working junior in America, carries off another big production

almost singlehanded. A nameless waif I picking up a living around racing stables. I he manages to buy a crippled race horse, I then bullies and wheedles a gin-sodden | ex-veterinary (Wallace Beery) into putting I the racer back on its feet again. He adopts | the veterinary as his father, cures him of I his drinking, enters his horse in a sweepI stakes and comes off with a $3,500 purse. I Quite a day’s work for a lad in his early I teens.

In outline the story is reminiscent of I “The Champ,” and Wallace Beery gives I much the same endearing jumbolike perI formance here as he did in that all-time I success. On the whole, however, it's I Mickey’s picture. If you don’t like Mickey I Rooney in “Stablemates,” there’s always I another Mickey Rooney picture round the I corner. Most movie-goers will agree, I however, that this is Mickey’s best picture I to date.

You Can't Take It With You.—Frank Capra’s I screen version of the Broadway success about I the erratic Sycamore family. With Jean I Arthur, James Stewart, Lionel Barrymore. I Highly recommended.

Carefree.—Fred Astaire as a psychoanalyst I and Ginger Rogers as his patient. The dane| ing is excellent and so, outside office hours, I is the picture.

Four Daughters.—Pleasant family film, with I an unpleasant but interesting newcomer (John I Garfield) to lend a touch of roughage. I Priscil’a. Rosemary and Lola Lane, plus Gale I Page, are the daughters. 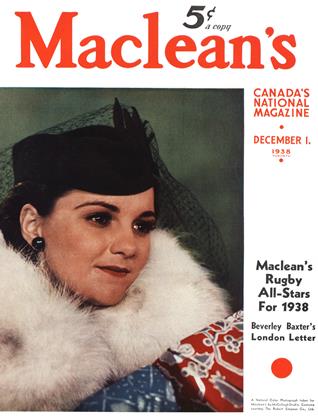