The Young in Heart

THIS IS undoubtedly one of the nicest sentimental comedies of the year, with a cast of characters who are all either delightfully wicked or delightfully good. The Carletons— Colonel Carleton (Roland Young), Marmy (Billie Burke), Rick (Douglas Fairbanks, Jr ). George Ann (Janet Gaynor) arc a family of fascinating sharpsters who float about Europe living on their wits and charms. When they meet a lonely old lady (Minnie Dupree) who lives on her money, the Carletons go to work on her with all their talents, and are soon ensconced in her London home waiting for her to die and leave them her money. It doesn’t work out that way of course, for the endearing old spinster manages to beguile them against all their natural instincts into a life of respectability and independence.

The charm of “The Young in Heart” is that the Carletons remain just as engaging and lively after their reformation as in their scapegrace period. The sentimental theme has been handled wittily and lightly, the cast is practically perfect, and the whole thing is so irresistibly pleasant that not even the toughest-minded movie goer can object to the old-fashioned happy ending.

THE GREAT WALTZ” is a graceful fable, laid in Vienna and set to threequarter time. This is the story, much romanticized, of the career of Johann Strauss, 2nd, who gave the Viennese waltz to Europe and laid the foundation for more musical productions than any composer in history. Story and script have been happily blended here into a pattern both dreamlike and gay. In addition, Luise Rainer, as the baker's daughter who married Johann Strauss (Fernand Gravet), has a part at last that is really worthy of her spirit and talent. Opponents of swing music will undoubtedly have a field day at “The Great Waltz,” which from the musical point of view is a triumph of everything that is languorous, old-fashioned and melodic. Director Duvivier has paced the narrative shrewdly enough to offset the rather slow movement of waltz time. The music itself is lilting and tuneful

enough to please anybody. Swing addicts who come to “The Great Waltz” to scoff will probably remain to sway.

YOU HAVE to be awfully sympathetic with the teen ages to get much pleasure out of “Listen, Darling,” which teams Judy Garland and Freddie Bartholomew. The story has to do with the efforts of the juveniles to arrange the romantic affairs of their elders (Mary Astor, Walter Pidgeon), and all Judy’s energy and Freddie’s polite helpfulness don’t make the sketch entirelyconvincing. When Dottie Wingate (Mary Astor) decides to marry in order to provide security for her children (Judy Garland and Scotty Beckett), Judy and Freddie abduct her in a trailer in the hope that a change of scene will change her mind. It does, of course, and everyone is made happy—at least everyone on the screen.

Judy and Freddie have now reached That Certain Age, a period even more perplexing for producers than for parents. It’s a little doubtful if their present effort will help them much over the difficult period.

THE medical profession, which up till now has always been treated with the greatest respect on the screen, comes in for some rough handling in “The Citadel.” The hero (Robert Donat) is a young physician with high talents and ideals, who quits his practice among the Welsh miners and goes to London. Here he discovers that the medical profession isn't by any means the group of high-minded healers that he—and we—had always believed. In fact Dr. Donat’s experiences in Harley Street should make any ailing movie goer resolve to stay quietly at home after this and eat an apple a day.

Some of the best sequences in “The Citadel’’ are in the early part of the film, where the hero is shown working among the miners according to the best traditions of the medical profession and the movies— in particular a childbirth in a worker’s home and an amputation scene in a mine cave-in. Rosalind Russell as the physician’s young wife manages to combine serious ideals with high attractiveness, and Robert Donat’s performance is at all times compelling and sincere. Altogether, this is one of the season’s most interesting films,

A Man to Remember

A MAN TO REMEMBER,” which also deals with the medical profession, is an unassuming and beautifully rounded out story of a small town doctor’s career. Beginning with the funeral of Dr. Abbott (Edward Ellis), the picture goes back over the twenty years of his life in the town of Westport. As a portrait both of a man and of a community, this picture could hardly be improved upon. A simple narrative ingeniously unfolded, it tells of the country

•doctor’s quiet devotion to his profession and bis rather grudging community, of his grim extortion of a hospital from the town’s stingiest citizen, of his singlehanded fight against an epidemic of infantile paralysis. The direction is novel and absorbing, but it is Edward Ellis’ unspectacular but beautifully sustained portrayal of the central character that gives the film its real distinction. A picture to remember.

IF YOU aren’t put off altogether by the rather severe title of this English film, you will find it an exceptionally absorbing and worth-while picture. South Riding is an English political district, but it’s the human side of politics that is revealed here amid a wonderful display of English types and character. On its dramatic side, the picture presents a bankrupt man of property (Ralph Richardson) with a beautiful mad wife, a grafting contractor (Edmund Gwenn) hounded by blackmail, a near-suicide, and a pretty schoolteacher (Edna Best) who uncovers the political skulduggery, exposes the grafters, saves the suicide, and finally gets the whole district off to a fresh start.

All these various elements are worked into a fine firm narrative, and the picture is so intimately detailed and so persuasively acted that it is easy to believe the story in spite of its rather melodramatic devices. The photography has the quality meltingly beautiful travelogue of rural Mligland.

You Can’t Take It With You.—Frank Capra’s screen version of the Broadway comedy about that remarkable Sycamore family. With Jean Arthur, James Stewart. Recommended.

Suez.—The story, considerably fictionized, of the building of the Suez Canal, along with some romantic interludes in the life of its builder, Count de Lesseps. With Tyrone Power, Loretta Young, Annabella.

Men With Wings.—An outline of flying, together with a love story about flyers. With Fred MacMurray, Louise Campbell, Ray Milland. Recommended.

Too Hot to Handle.—Life of a newsreel cameraman who covers everything from air-

Room Service.—The Marx Brothers in a

The Sisters.—Life of a Western family under the Roosevelt-Taft administration. With excellent performances by Bette Davis, Errol Flynn. A good period picture.

Straight, Place and Show.—The Ritz Brothers at the height of their fury. For Ritz admirers.

Marie Antoinette.—A big, expensive and often beautiful production, with Norma Shearer as the tragic Queen of France, and Tyrone Power as the romantic Count Fersen. Worth while.

Carefree.—Fred Astaire as a psychoanalyst and Ginger Rogers as his patient. The dancing is excellent and so, outside office hours, is the picture.

Four Daughters.—Pleasant family film, with an unpleasant but interesting newcomer iJohn Garfield) to lend a touch of roughage. Priscilla, Rosemary and Lola Lane, plus Gale Page, are the daughters.

Professor, Beware.—Harold Lloyd proves once more that the feature-length chare sequence is just as good today as when he was a boy.

That Certain Age.—Deanna Durbin’s latest, and her fourth dazzling success in a row. With Jackie Cooper, Melvyn Douglas.

Love Finds Andy Hardy.—Awful effects of first love on Mickey Rooney. One of the most popular of the Judge Hardy series. 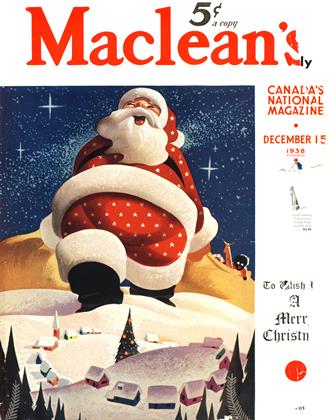