For Men Only-Firemen can dress and turn out in less than thirty seconds. This is one of the jobs that women are not likely to crash into.—Regina Leader-Post.

Old But Still Good—We don’t need men with new ideas so much as we need men who will put energy behind the old ideas that are practical. — Kitchener Record.

Communism Is Here ¡—Toronto’s election, analyze the vote how you will, is the proof in fact for all that Colonel Drew and the few others alive to the dangers have said. Communism is here. —Toronto Globe and Mail.

Talk Is Cheap—Every man covets public respect. If necessary he does something useful; but if talk alone wins him a reputation, he offers nothing more. —Fredericton Gleaner.

Not a Conqueror—When a man argues with a woman it usually works out like this: He came. He saw. He concurred! —Galt Reporter.

Some Car!-~If all the “engineering triumphs” mentioned by the manufacturers of automobiles were combined in one car, wouldn’t it be a humdinger?— Niagara Falls Review.

Good Old-Shoe Times—An English churchman objects to confetti at weddings as untidy and suggests the return to old shoes. Only a few years back a guest who threw his old shoes at a wedding would have had to go home in his stocking feet. —Montreal Herald.

The Greater Danger—The Chinese are a sorely-tried people these days, what with the Japanese all around them and their own airplanes overhead.—Judge.

Probably It Will—It is confidently hoped that this bazaar will help in augmenting the slander resources of the Women’s Guild.—Provincial newspaper.

Mechanical Warfare—They say that machinery will do practically everything in the next war except the walking on crutches.—Sudbury Star.

The Medal Collector—Several old Roman medals of hitherto unknown design were recently excavated in Italy. It would be a gracious gesture to present them to General Goering to complete his collection. —Punch.

The Newest Danger—A gossip-note writer says that the best dancer at a night club he visited was a man with a heavy beard. The reveller was probably a businessman detained at the office who was taking no chances of the revels being televised.—The Humorist.

Quaint People—Our forefathers were those quaint, old-fashioned people who, if they couldn’t earn enough to get along on, got along on what they earned.—Niagara Falls Revieiv.

average man is crazy for a job but he doesn’t feel that anything ought to be done to encourage any person or firm who is furnishing jobs. He’s like the man crazy to raise a crop who always went out and plowed up his com — Edmonton Bulletin.

Self-Control—Another example of selfcontrol is the case of the man who can afford to buy a new car every year but doesn’t.—Galt Reporter.

A Good Idea—The chief difference in men is their ability to use ideas which they find. Very few men create ideas. They are generally the creation of someone else, like a story that is heard and passed on. —Kitchener Record.

Don’t Looit at Me Through Them Things, Duchess!

By horn-rims I’ve been peered at, By rimless mountings sneered at, By tortoise-shells been hazily detected;

By a monocle unnerved,

And by pince-nez I’ve been ruthlessly dissected;

But while spectacled inspection When deflected my direction Often causes me uneasily to squirm, I have yet to undergo What instinctively I know Will instantly reduce me to a worm: I have yet to be upset By a glittering lorgnette,

And they tell me it makes all the rest look sick;

By a fancy pair of glasses on a stick!

Cold Feet—“The process of thinking draws the blood from the feet to the head,” an educator informs us. This explains why, in so many cases, if you think twice about a proposition, you get cold feet. —Welland-Port Colborne Tribune.

Funny Salesmanship—The salesman who attempts to be funny at a customer’s expense would tell a mother her baby was a homely little brat and then expect to be asked to stay for dinner.—Kitchener Record.

Progress Is Slow—They have grafted a Russian’s toe on to his hand, to serve as a finger. So far we have not got beyond having our shirt tails made into extra collars.—Fredericton Gleaner.

The trouble with a lot of children is that the education of their parents was sadly neglected.—Lindsay Post.

A Needed Invention—John Hays Hammond, Jr., has invented a device to “filter the voices of screen and radio performers and remove unpleasant qualities.” Now, Mr. Hammond, invent something to filter the bunk out of political s[leeches.—Ottawa Citizen. 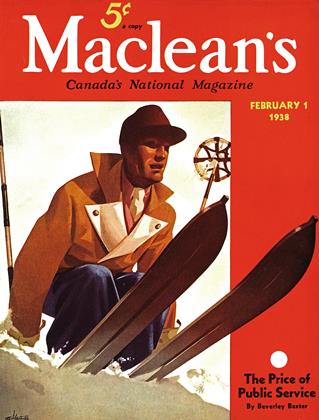