WHEN ‘‘The Hurricane” hits your local theatre, the only thing to do is cling to your seat and let the elements have their way. They are Mr. Sam Goldwyn’s elements, which means that nature herself could hardly have improved on them. There have been tornadoes on the screen before, but compared with the Goldwyn catastrophe they don’t seem much more impressive to look back on than a burst water main. The trouble is that the hurricane here is so overwhelming that when it comes it almost drowns out the story which precedes it; which is rather a pity, for the NordhoffI-Iall tale of South Sea love and adventure is fine screen narrative, movingly presented.

Dorothy Lamour and Jon Hall are the principals. They’re both talented young

I people who look remarkably well in sarongs and know how to act in an emergency. ‘‘Hurricane” is full of emergencies, of the special kind that befall Tahitian lovers who run foul of the white race. For lovers of South Sea romance "The Hurricane” would be a worth-while picture, even without its terrific climax. However, it’s the hurricane most people have been led to expect, and it’s worth waiting for. It’s magnificent and astounding, it lasts twenty minutes, and is altogether the worst stretch of weather most of us are ever likely to encounter, indoors or out.

ROSALIE” has Tapster Eleanor Powell, - with Nelson Eddy as singing hero, and some good Cole Porter music. It also has Frank Morgan, Edna May Oliver, Ray Bolger, and a new Budapest beauty, Ilona Massey, who sings. In fact "Rosalie” could have got by just on its talent, but it has thrown in a million dollar’s worth of production, with the result that it’s as big as all outdoors and looks a lot more expensive.

Rosalie (Eleanor Powell) is a Balkan princess attending Vassar College incognito. Dick Thorpe (Nelson Eddy) is in training at West Point, in this version considerably more of a Flirtation Walk than a military academy. When Rosalie returns to the Balkans, he solo-hops the Atlantic to rejoin her and continue the romance. He meets her at the Romanza spring festival, which climaxes in an enormous ballet, with a flight of drums down which Rosalie tap-dances her way, a drum at a time. It’s magnificent to watch,

but then Eleanor Powell is always magnifi cent to watch, without the Ziegfeld fixings. "Rosalie" covers a lot of ground and runs well over two hours. By cutting down time and expenses, they might have turned out just as good a show-perhaps even a little better.

"XÆAYBE it’s about time for Walter 1V1 Winchell and Ben Bernie to call off their air raids on each other and sign a peace treaty. After watching the two in their latest engagement, one feels more convinced than ever that in wartime it’s the noncombatants who do most of the suffering.

The story has to do with Ben Bernie’s sponsorshio of a new European star (Simone Simon), and his difficulties with

Walter Winchell who launches a broadcast attack against the newcomer, sight unseen. So Ben arranges to bring his protégée to Walter’s attention, and Columnist Winchell is soon completely taken in by a plot that would hardly have fooled Grade Allen.

The plot and the Bernie-Winchell feud are chiefly what is wrong with “Love and Hisses.” There’s some fair music, and a comedy romance between Joan Davis and Bert Lahr that is often quite funny. Simone Simon, much Americanized in everything but her accent, is pretty as can be, and sings charmingly.

'"PHIS PICTURE is a romantic comedy about love and art in an attic, and how riches came in at the door and love flevr out the skylight. Robert Montgomery is

the artist, Rosalind Russell his bride, and Comedian Robert Benchley the friend of the family who sleeps on their sofa, consumes their groceries and solves their problems. All three are happy as larks so iong as they don’t know where the next meal is coming from.

Then Painter Montgomery is discovered by an art critic and things begin to go wrong. He is promoted by a highhanded blonde (Helen Vinson), he loses his ideals, and takes to painting society matrons in diamond stomachers. However, it all works out to a satisfactory ending. “Live, Love and Learn” is old material, but it is handled freshly and wittily here, and charmingly acted, especially by the heroine. Rosalind Russell has always been easy to look at, and now that she has

stopped blinking her eyes rapidly in animated moments, she is equally easy to watch.

CAB CALLOWAY and his Cotton Club boys, Ted Lewis and his band, Louis Prima and his, Kay Thompson and her ensemble, Jack Jenny and his orchestra, are all in this picture. It also has Gene Autry, Joe diMaggio, and a number of minor novelty artists. These are iust top dressing. There is a complete acting-cast besides-—Ann Dvorak, Phil Regan, Tamara Geva, James Gleason and a gangster ensemble, with Leo Carrillo as the gangster himself, as usual active enough for six. In fact there’s been such a crowd collected in this film that you almost feel you have to stand up on your chair to see what’s going on.

The story has to do with a gangster who takes over a recording business and then persuades most of the world’s entertainment notables to come in and make recordings. To add to the confusion, Tamara Geva as a temperamental diva has several attacks of hysterics. Alto-

gether, “Manhattan Merry-Go-Round” is the sort of film that seems to require a traffic officer more than it does a director. There’s plenty of entertainment, however, for movie-goers who like their entertainment that way.

Something to Sing About

COMETHING TO SING ABOUT” is ^ another of Hollywood’s self-portraits, with James Cagney cast as a cabaret hoofer who goes out to the Coast and makes good. The star dances with plenty of vigor and sings a song or two, but this is hardly one of his best roles. We’ve become accustomed to a Cagney who is tough and active at close quarters, especially in his courtships; and it seems a little queer to watch him being romantic and wistful over long-distance telephone. There’s only one sequence in which he really lets himself go,

demolishing a studio set and battling the entire cast and technical staff at once. The rest of the time he’s a softer Cagney and not always a convincing one.

Evelyn Daw is the heroine, a young lady with a baby voice, a cute manner and an invincible jawline. No picture containing James Cagney can be altogether lacking in vitality and interest. What fun there is in “Something to Sing About” is in watching Cagney dancing, fighting, and even dally. ing over the telephone.

Damsel in Distress.—Fred Astaire. Burns and Allen, and some comedy aspects of the English aristocracy. Funny and gay and highly recommended to the whole family.

Tovarich. — Claudette Colbert and Charles Boyer as the titled Russians who went to work in a Paris kitchen. They’re both charming and pleasant to watch, though not exactly Russian. Good entertainment.

Second Honeymoon.—Loretta Young and Tyrone Power in another of those flighty comedies about love, divorce and fun on vacation. It doesn't come off quite as well as it might.

True Confession. — Problem - comedy about the husband who couldn't tell a lie and the wife who couldn’t tell anything else. With Carole Lombard and Fred MacMurray. Fine entertainment.

Stage Door. — Screen version of the Broadway success, which turns out for once to be a better picture than it was a play. With Katharine Hepburn, Ginger Rogers, Andrea Leeds. The year’s best directorial job.

Nothing Sacred.—Carole Lombard and Fredric March in a rough and tumble technicolor about newspaper life in New York. Recommended.

First Lady.—Screen version of the Broadway play about life in Washington, with Kay Francis as the lady who almost ran the ship of state aground. It's an amusing comedy, but Miss Francis acts as though she really believed it.

The Firefly.—Jeanette MacDonald, the Friml tunes and more about the Napoleonic campaign. The plot is long and over-complicated, but the music is charming and so is the star.

Wells Fargo.—The establishment of the pony express across the United States, with Joel McCrea as America’s first expressman. Some fine spectacle sequences rather loosely strung together. A family film.

Dr. Syn.—George Arliss as a pirate who turned clergyman but kept up smuggling as a side line. Livelier than most Arliss films, though not quite so improving. Young people will enjoy it.

Conquest.—Napoleon and his famous affair with Madame Walewska. With superb performances by Charles Boyer and Greta Garbo. One of the year’s best pictures.

The Awful Truth.—Divorce on its rowdier side. With lively performances by Irene Dunne and Cary Grant. Amusing entertainment.

The Life of Emile Zola.—The year’s best picture. With a superb performance by Paul Muni. 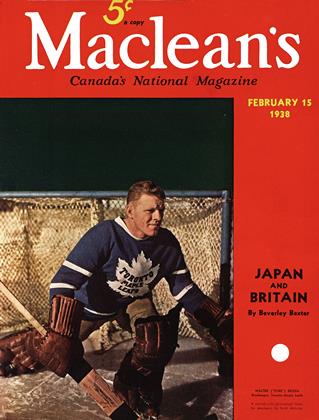