IN 1922 the British railways were in a chaotic condition. Throughout the country there ran 20,000 miles of track, most of it paralleled, and in some cases short-

circuited, by good highways, along which ran efficient and growing road traffic.

These 20,000 miles of track were divided among no less than 120 railway companies and ten times that number of subsidiary undertakings. The result was that services were duplicated to a ridiculous degree. For example, a passenger travelling from London to Birmingham had the choice of three lines, depending on whether he preferred thickly padded cushions in his compartment, or a hassock under his feet in the restaurant car, or hot water in the lavatory.

Due mainly to the Government policy of discouraging people to travel by railway during the War in order to facilitate the movements of troops, the public were turning more and more to the road systems for transport.

Today the position is completely changed. The bewildering network of railway undertakings is replaced by four

companies, which work in harmony together and whose profits rose last year to £33,000.000.

There is, perhaps, an analogy fyr Canada in the way this tremendous amalgamation was carried out so successfully.

For the Public Good

CREDIT FOR the Railway Act of 1921 must go to the late Sir Eric Geddes, who died last year. Briefly, the radical changes ordered by the Act may be summarized as follows:

1. A new system of goods rates and passenger fares which abolished preferential and exceptional charges, and arranged scales and tariffs wherever possible to be applied impartially over the whole railway system.

2. Abolition of the system of maximum Parliamentary charges.

3. Institution of a Rates Tribunal upon which rest the function and responsibility of arranging new rates and charges on a fair and equitable basis, after bringing both

traders and passengers into close consultation with the ra il way s' representa t i ves,

4. Rates and charges to be reviewed every year and if necessary revised, so as to maintain a standard level the net revenue yielded to the railways in 1913.

The last clause, next to the actual consolidation of the railways into four groups, was probably the most important in the whole Act because it secured as a principle that the good of the trading community, rather than the simple earning of dividends, should be the main objective of railway management. It embodied the principle of limitation of dividends, or at least of the fund out of which the dividends are paid.

Of course, the 120 separate undertakings and multitudinous subsidiaries were bitterly opposed to the whole scheme. There were at least 700 directors on these concerns, and their annual fees amounted to about £154,000. They did not relish the idea of losing this part of their incomes.

They were given time in which to arrive at a harmonious agreement, after which a Government Tribunal stepped in and took control of the amalgamations.

The workers, of course, had their own difficulties but were well provided for under the Act. Primarily, it was

recognized that reduction of staffs must be gradual, and by reduction of the compulsory retiring age to fifty-five.

The Act dealt thoroughly and comprehensively with the question of compensation for displacement. It provided first of all that “every existing officer and servant shall, as from the date of amalgamation or absorption, become an officer or servant of the amalgamated company.”

It then laid down that, although an amalgamated company had the right to abolish any office held unnecessary, no officer or servant could be transferred without his own consent to a position he held to be worse either in the nature of work, salary, conditions, or pension prospects.

Provision was made in such a case for reference to a special tribunal in which compensation must lie made if his case was proved.

Compensation was also to be paid to anyone who suffered a reduction of salary or standing “on the ground that his duties have been diminished,” or who otherwise suffered a financial loss by reason of the amalgamation.

Surplus directors received a compensation of £1,400.

The consolidation of the “Big Four” railways came into operation on New Year’s Day, 1923.

Thirty-three companies, owning 3,753 miles of track, and with a directorship of twenty-two, went into the Great Western Railway.

Thirty-five companies, owning 7,564 miles of track, and with a directorship of twenty, went into the Dindon, Midland and Scottish Railway.

Thirty-three companies, owning 6,464 miles, and a directorship of twenty-two, went to make the Dindon and North Eastern Railway.

Nineteen companies, owning 2,129 miles of track, and with sixteen directors, went to make the Southern Railway.

The most important effect of the Act was as psychological as it was commercial —namely, a closer contact with the public.

The companies began to keep in closer touch with the events that are a part of English life and that attract crowds--football matches, the Derby and Grand National races, even flower shows. Nothing was ten) small or insignificant. There was created that savior of the railways, the special excursion train.

The main idea at first was to make any possible use of idle stock, but the idea caught on so well that the excursion train is an indispensable part of the railway service in Britain today.

Prices are reduced more than half, sometimes by two thirds on these trains. Last year 500.CKX),(XX) excursion tickets were sold.

Many idle coaches were converted into moving homes, fitted with cutlery, crockery and bedrooms for six people.

Train cruising was another idea. One train left King’s Cross Station, London, for a 2,000-mile tour of the country. Redundant cross-Channel steamers were used for week-end cruises to the Continent.

IN 1932, when the railway companies decided to pool their receipts wherever there was still competition and contact between them, the last great step toward consolidation and co-ordination wras taken.

In fact, the progress toward this end has been so swift that many of the British people are still unaware of the facilities they can obtain.

Some effect can be indicated by the example of the Lancashire cotton workers. Until a few years ago there was only one holiday seaside resort as far as Lancashire was concerned—Blackpool, on the West Coast. Each cotton town took it in turns to have a holiday, and all through the summer for generations. Blackpool had its “Wigan week,” its “Burnley week,” “Oldham week,” “Blackburn week,” and so on until the autumn.

Anybody who went farther afield was regarded as “ultramodern” or wealthy.

But the last few' years have seen a growing holiday infiltration of Lancashire families into Devon and Cornwall, the Channel Islands, the South Coast, Ireland, the Scottish Highlands, and so on.

In 1933 the “Big Four” cut their fares by one third from three cents a mile to two cents, third class. Tickets at these rates are available by any train, any day for a month, to all but a few isolated stations in the British Isles. Halfday excursions and evening excursions by special trains are run at cheaper rates. “Save to travel” stamps was another novelty introduced at railway stations to encourage the jxxirer section to save up their railway fares.

Services were made faster. In the last four years, passenger services were speeded up by more than 50,000 minutes. England's fastest start-to-stop train, the Cheltenham Flyer, covers the seventy-seven miles from Swindon to London in sixty-five minutes at 71.3 miles per hour. The “Silver Jubilee” express covers the 232 miles between London and Darlington in 198 minutes, an average startto-stop speed of 70.4 miles an hour. “Speed,” said Robert Bell, the assistant general manager of this line, “is not an

expensive luxury but a profit earner when offered to the public under conditions which give it a strong appeal.” Receipts on the “Silver Jubilee” prove he is right. Receipts for the "Silver Jubilee” are 16s. 2d. ($3.88) per train mile; working expenses are 4s. 2d. ($1.00).

ON FREIGHT trains, goods are delivered the morning after dispatch. Under one system, a consignment of goods, whether a parcel, truckload, or trainload, is kept under observation throughout its journey, and delivered in accordance with a prearranged schedule for a fee of fifty cents.

The British railways have spent about £1,000,000 on important stations and goods depots, mechanizing carriage fleets, and building special kinds of w'agons, such as the “container,” which can be lifted from a truck to a lorry.

In the countryside special delivery services now deliver goods right to the farmer, who is still a little bewildered at and suspicious of this apparently inexplicable generosity on the part of the railways.

The other day a North Country farmer moved into the South. He just put on his hat and coat and caught the train. The railway company did the rest. It packed his farm, with his pigs, hens, cattle, poultry and implements, and then next day set up his new farm in the South country.

Inside the organization of the “Big Four,” attempts have been carried out successfully to bring a new spirit into the officers and servants by means of special company magazines encouraging internal competition for special awards.

The proof of this is, as usual, in the profits.

Wages are high, and are still 150 per cent above pre-War.

Large sums are being spent in improving the standard of maintenance of certain absorbed lines.

Despite these factors, the companies have been enabled, while substantially maintaining their revenues, to grant material concessions in rates and charges of all descriptions.

“I can say positively that the grouping has produced added economies and efficiency, and has been of direct benefit to the trader and shareholders. By producing greater security of tenure and increased prospects of advancement it has also been directly to the advantage of the employees.” 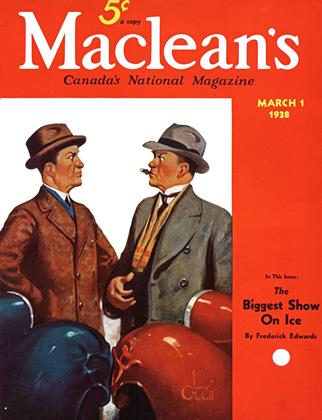