NOTHING surprises us any more. If a young man stepped up to us on a crowded street corner and enunciated clearly: "Pardon me, but what is your name, and do you sleep in pyjamas or the oldfashioned nightshirt?" we wouldn’t bat an eyelash. We would look for the microphone.

A big Canadian milling company launched one of those programs recently, putting innocent bystanders on the air from the lobby of a Toronto theatre. Various giggling and sometimes incoherent folk were asked such questions as: "Why do women patronize bargain counters?" and "Who is your favorite movie star?” for the edification of the Unseen Audience. Each guest of the moment was rewarded with a pass to the theatre and a bag of flour. And at the slightest provocation the announcer burst into hosannas concerning his sponsor’s products.

"What is your name, sir?” he enquired of the third guest. And on being told, he asked: "And where do you come from?”

But the gentleman from Peterborough didn’t say anything about the lift-locks. Instead, he replied promptly and clearly:

And the announcer for the program that was not sponsored by the Quaker Oats people but by their most prominent business rivals, could only find breath for a horrified: "Don t ever do that!” Whether he gave the interviewee a bag of his sponsor’s breakfast food, is unknown to us. But we know who should send him a year’s supply of porridge. They didn't have to pay for the radio plug and we never diarge for mention in Parade.

Among the Alberta intelligentsia things are in pretty bad shape right now. Rancor exists. Bitter words are uttered. Red anger flames, and recrimination rears its ugly head. The innocent cause of the tumult isof all persons— Mickey Mouse.

We were under the impression that Mr. Walt Disney’s precocious creation had been by this time, accepted practically as one of themselves by members of the intelligentsia everywhere. Certainly many erudite articles full of ponderous and polysyllabic words have been written and published, authoritatively expounding the deeper significancies of the effects of Mickey’s antics on modem international psychology, along with similar profundities. Mr. Disney himself has been hailed and lauded and honored by awards, medals, plaques, presentations, and on numerous public occasions has been described as one of the most outstanding and consequential geniuses of our time, rather than just an unusually shrewd and able comic strip artist.

They don’t think Mr. Disney is that good in Alberta; or rather they don’t think so in Edmonton. In Calgary, it would seem that they do think so, and Edmonton is very much insulted as a consequence. It all began when two undergraduates of the University of Alberta went to Calgary to put on a debate. The collegians were presented as an added feature to a Mickey Mouse picture, and Gateways. the undergraduate newspaper, swung into action at once, describing the contretemps as: "ludicrous . . an insult to university debating, and a reflection on the level of intelligence and interest of audiences in the southern city."

Obviously. Mr. Bell’s telephone system, having grown to its present proportions, must operate under certain definite regulations. When, for example, someone calls a

number no longer in use, the operator is required by the rules to employ a prescribed formula in reply; and she cannot deviate from that set phraseology.

That is why one irascible Vancouver gentleman, trying to reach a friend who had moved, was so severely shocked a while ago.

"That telephone,” said the operator, “has been disconnected.”

The caller insisted that it could not have been disconnected.

“Sorry, sir,” the operator repeated, "but that telephone has been disconnected.”

We regret to have to report that the man who was trying to make the call lost his temper, which is something you never should do with a telephone operator. He stormed:

"Disconnected, my eye! Say, am I crazy, or are you crazy?”

And the operator replied, still sticking staunchly to the rules and regulations:

"I’m sorry, sir, but we are not allowed to give out that information.”

At the monthly meeting of a Ladies' Aid Society, held in Vegreville, Alta., each of the ladies in attendance is required to answer her name at roll call, and give an account of the number of calls on sick, needy, and strangers she has been able to make in the previous month. Responding to the secretary’s request, the member says: “Present,” and then submits her report.

At this meeting, the secretary called—shall we say?— "Mrs. Spivis.”

But Mrs. Spivis was concentrating upon a difficult problem in the needlework she had brought with her, and the call was ignored.

Spivis!”; and once more the words fell upon totally deaf ears. Mrs. Spivis was still intent upon her needlework.

So, for the third time, the secretary required: “MRS SPIVIS! !”

And Mrs. Spivis looked up, mildly surprised, and totally unconscious of anything except her needlework problem, replied:

It was Mark Twain who said that folks grumbled a lot about the weather, but nobody ever did anything about it. For that matter Canadians grumble a lot about the winter, at times, but Parade knows of one man who does things about it. He is a resident of Lakefield, Ont., and when he is forced outdoors during cold snaps, he ties two hot water bottles across his chest, inside his suit coat. He says the scheme works fine, keeping him warm and causing him only occasional embarrassment when neighbors want to be told why he always gurgles when he walks.

One of the gentlest and most trusting characters known to Canadian art is Emmanuel Hahn, the Toronto sculptor, who designed the country’s newest coins.

Not long ago, “Manny,” his equally distinguished sculptress wife, Elizabeth Wynn Wood, and two friends attended a banquet in a neighboring city. As the speeches lasted longer than expected, they decided to stay overnight and drive home next morning. No rooms were available in the hotel, so after some scouting, two rooms were secured in tourist homes.

Before turning in, the four gathered for a chat, and conversation turned to sculpture and design. Relating some of the difficulties of coin design, Hahn pulled out of his pocket four shiny new Canadian quarters, fresh from the mint, bearing his own design. As a father regards his first-born, he announced that he would always keep those first four quarters.

Next morning, in the eight o’clock quiet of the Sabbath, the Hahns stole softly downstairs intending to put their bags at the door and go back to the kitchen to find the landlord. But before they reached the door there was a bellowed, “Is this what you call leaving?” and they turned to find an irate host at their heels.

Flustered by unjust suspicion, Hahn dug down into his pockets. "Three dollars,” demanded the keeper of the house.

To his consternation all sculptor and sculptress had with them was a two dollar bill—and the four shiny, new and sentimentally precious quarters.

Two minutes later "Manny” was mournfully describing his misfortune to the two friends who tragically chorused "Not the beautiful new quarters, you didn't have to give him those!”

“It wasn’t that so much,” said Hahn, "but when I handed them out the blighter turned them over and said, ‘What do you call this? I don’t recognize these things. Is it good money?’ That made me a bit mad, so I picked up the bags and I said pretty firmly, ‘Sure they’re good. I know. I designed them myself.’ And we walked out. But he had the darnedest look on his face !”

In Montreal, as in all large cities, many small specialty shops enjoy only a brief flowering, then fade, and who cares? A desolately naked shop window today, where yesterday was an enticing display of merchandise, gets to be commonplace with the hardened public, passing by without a thought of the blighted hopes, the bitter heartbreak it may represent. But, people w’ho merely pass by are not potential customers, and, with that fact in mind we must admire the resourcefulness of one small shopkeeper on St. Lawrrence Boulevard, notoriously a street of broken mercantile dreams. In the middle of his empty window’ he sets up a big print card : 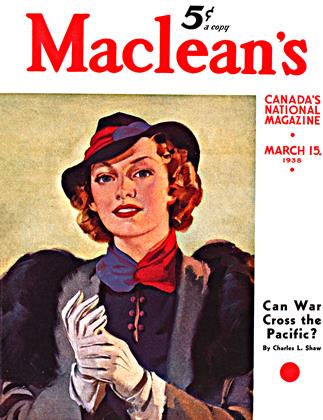