ECONOMY and convenience are the two great advantages of oven meals. Enough to recommend them to any good housekeeper. And aren’t we all? Or are we?

No special recipes or equipment and no new technique is necessary, and anyone with an oven can cook a whole meal in it. But it does take a little forethought to combine dishes that require approximately the same temperature. If they all take the same time, you can put everything in at once, and that’s all there is about it. But if you have, say, a rolled roast of beef as the main dish and a Fruit Betty for dessert, simply put the slow cooker in early, and the pudding twenty minutes before serving time.

In placing the food on the oven racks, the system is to stagger them, to allow a free circulation of the hot air between and around the dishes. Don’t place one directly above the other and don’t overload the space. A temperature regulator simplifies things, as no watching or peeking is required. And a time control sets your mind at rest if you have to go somewhere for the afternoon and want dinner ready around six.

Have your oven at 375 degrees Fahr, and put in the three dishes which require about the same length of time to cook. The meat loaf is made from fresh ground beef with suitable seasonings and any desired additions. To scallop the onions, slice them thinly and arrange in layers in a greased casserole. Sprinkle each layer with flour, dot with butter, and season with salt and pepper. Repeat until the dish is full, and cover closely for baking. Parboil the peppers for five minutes, then drain and fill with canned spaghetti. Place in the oven 20 minutes before the other dishes are finished cooking. Then take your whole dinner out at once.

Melt the 3 tablespoonfuls of butter in the baking pan, add the brown sugar gradually, and stir over the fire until melted. Then pour in the hot apple sauce, covering the surface of the pan. Cream the butter, add the sugar gradually and continue creaming. Add the beaten eggs and molasses, and beat the mixture thoroughly. Sift the flour once, measure and sift again with the soda, ginger and salt. Add these dry ingredients alternately with the sour milk to the first mixture. Pour this batter carefully over the apple sauce in the pan, having the pan not more than half full of fruit and batter. Bake from 45 to 50 minutes.

Roast of lamb, 30 minutes to the pound

For this menu use a temperature of 350 deg. Fahr. Estimate the time of cooking your roast according to its weight, and put in the preheated oven. Or start with a cold one, if you prefer. Those who like to give the meat a preliminary searing can put it first in a very hot oven—500 deg. Fahr. —for a few minutes, then lower the heat and continue the cooking at 350 degrees.

Medium-sized potatoes take about three quarters of an hour, and unless the carrots are young and tender they will need about the same time. Put these in a baking dish with a little water, add salt and cover closely.

An easy way to cook and serve the pudding is to put the diced raw rhubarb, with a little water and plenty of sugar, in a casserole, cover and set in the oven while you prepare the vegetables and mix the batter. Pour the batter over the cooked rhubarb and bake.

After the veal loaf has a half-hour’s start, put in the vegetables to keep it company. Then about the time you get the soufflé made, will be the strategic moment to add it.

Cream the butter until soft, add the sugar and continue creaming. Add the beaten egg yolks, then the bread crumbs and the pineapple. Fold in the stiffly beaten egg whites, and turn into a buttered baking dish. Place in a pan of hot water and bake in an oven at 350 deg. Fahr, for 35 to 45 minutes. Serve at once with whipped cream.

Here’s a meal that goes into the oven all at once and onto the table in short order. It presupposes that you have some leftovers on hand. Mash the potatoes, combine with a little milk, egg and chopped parsley, then place in a shallow, buttered, loaf pan. The scalloped dish is a mixture of canned corn and tomatoes, seasoned and arranged in layers with bread crumbs between and on top. To prepare the fillets, dip them in heavily salted, undiluted evaporated or fresh milk, then in fine crumbs, and lay neatly in an oiled pan. Cook everything at a temperature of 450 to 500 degrees.

For the pudding, cut leftover cake in thin slices, spread in a buttered baking dish and cover with the sweetened apple sauce. Repeat until the dish is full, and reheat in the oven. Serve with tart lemon sauce.

This is another quick one baked at a temperature of 450 degrees. Add chopped onion and seasonings to the minced beef, shape into flat cakes, and wrap a strip of bacon around each. Secure with a toothpick. Cut the cooked potatoes in thin slices, and put in a well-buttered pan. Scallop canned beans by pouring medium-thick cream sauce over layers of the vegetable in a casserole. You can sprinkle each layer with grated cheese, if you like.

The shortcake is a rich biscuit mixture baked as individual biscuits or in two large layers. Serve with sliced canned peaches between and on top. Cap the climax with whipped cream.

This menu requires some temperature adjustment. If you want to sear the meat, put it in the oven at 500 deg. Fahr, for fifteen minutes, then lower the heat to 325 degrees and let it continue cooking. At this temperature cook the custard, which is an ordinary one made extraordinary by the addition of preserved ginger in thin slices and a little ginger syrup. Place the individual dishes in a pan of hot water, and as soon as the custard has set, remove it. let cool and finally chill in the refrigerator.

One hour before the meat is done, arrange a border of medium-sized potatoes around it. Cook whole parsnips in boiling salted water, then remove the skins and cut in lengthwise slices. Lay side by side in a shallow baking pan, sprinkle with brown sugar and dot with butter. Bake for 20-25 minutes, basting occasionally.

Have the ham about 3/4 inch thick, and prepare according to the following recipe. Parboil the potatoes for ten minutes or so, then slice and arrange in a buttered baking dish. Sprinkle with brown sugar and dot with butter as the finishing touch. The peas are merely turned out of a can into a covered casserole and put into the oven 15 to 20 minutes before serving time. At the last minute sprinkle a little finely chopped mint over them.

Ham with Savory Topping: Two pounds of sliced ham, 2 teaspoonfuls of minced parsley, 2 tablespoonfuls of minced onion, juice of 1 lemon. Remove the fat from the ham slices nearly to the lean meat and chop the fat finely. Mix the chopped fat with the minced onion and parsley. Place the ham in a baking pan and spread the onion and parsley mixture over it, then pour the lemon juice over this. Bake in an oven, 375 deg. Fahr., for about 45 minutes.

Cream the butter and sugar until smooth. Add flour and salt, which have been sifted together, the lemon juice and rind. Beat the egg yolks until light, add the grape juice, then combine this with the first mixture. Lastly, fold in the stiffly beaten egg whites, and turn the mixture into a buttered baking dish. 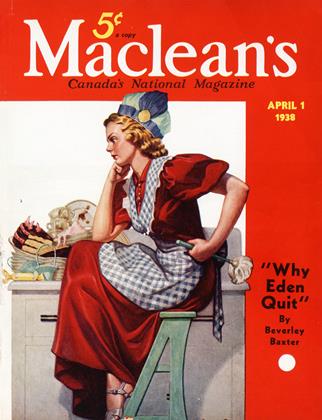