A Slight Case of Murder

WHEN gangster films are funny— i.e., when Damon Runyon writes them—they’re about the raciest form of entertainment on the screen. Author Runyon is at his best in “A Slight Case of Murder.” The problem of the hero (Edward G. Robinson) is what to do with four corpses which he finds hanging on hooks in a closet of his rented Saratoga villa. He is an ex-bootlegger turned beer baron, and he is surrounded by a police roundup of some of the screen’s funniest hoodlums—racketeers, race-track touts, beer salesmen, plug-uglies.

The difficulties of Baron Robinson and his associates in getting rid of the strange wardrobe lot left on their hands are wonderfully hilarious; and the wild innocence of the Runyon characters makes their behavior almost as guileless as the antics in the Dionne nursery. It’s tough in

places, of course, and rather gruesome, and not quite the picture for the children’s Saturday matinee. Masculine patrons, however, will find it exactly to their taste.

DANNY BRICE is what makes “Every-E body Sing” worth going to see; although it’s little Judy Garland who gets the headlining. Fanny here is a Russian maid in a theatrical household, and in between carrying the family tea and saving it from bankruptcy, she indulges in some of the famous Brice specialties, including a ballet number which ought to spoil the Moscow Art variety permanently for almost everybody. Judy is the child member of the household, and she sings a number of songs with the volume and shattering energy of a pent-up schoolchild let out at recess.

The plot has to do with the difficulties of the family cook (Allan Jones) in putting on a Broadway show. In the end, of course, the show goes on and it’s a hit, thanks to Fannie and Judy and one of MetroGoldwyn-Mayer’s elegant staircase sets lent for the occasion. Some of us would have traded the staircase set and some of Judy Garland’s shouting sessions and most of the specialties for one more Fanny Brice sequence; or even for more close-ups of her face. It’s not as young as it used to be and

it never was beautiful, but it’s one of the most satisfactory faces on the screen.

Romance in the Dark

AS LONG as Metropolitan stars are willing to sign contracts with Hollywood we will probably have the screen story of the young singer and her heartbreaking rise from obscurity to fame. And as long as the singers are as good-looking and appealing as Gladys Swarthout, it isn’t such a bad idea. Miss Swarthout’s heartbreak in “Romance in the Dark” is John Boles. He is a famous singer, and she signs on as his housemaid and tries to attract his attention by singing the Habanera aria from “Carmen” over her morning dusting.

It doesn’t do any good, however, as Singer Boles always stuffs absorbent cotton in his ears in the morrrng and, besides, isn’t interested in any singing but his own.

In addition he’s all taken up with his feud with his manager (John Barrymore), a rival Don Juan. Eventually the heroine gets caught in the scuffle, and after many mortifications achieves romance and triumph. It’s fairly amusing without being downright funny. A much more entertaining film could have been made, without losing any of the values, if laurel and Hardy had been substituted for Messrs. Barrymore and Boles.

T)RODIGY Deanna Durbin, too young for serious romance, has to have pictures that are tailored to her talents. In “Mad About Music,” as in ‘TOO Men and a Girl,” the tailoring has been expert. She is shown here as the child of a movie actress (Gail Patrick), a glamorous creature who feels that a fourteen-year-old daughter would be bad for her publicity. So Deanna is kept at school in Switzerland; and there, to save her face with her schoolmates who all have good family connections, she invents a father. Then, just when it becomes necessary to produce him, affable Herbert Marshall steps off the train and into the role.

lar numbers -are worked naturally into the story. Her voice is as phenomenal as ever, and neither her appearance nor her acting show any signs of Hollywood wear and tear—or, worse still, Hollywood im-

proving. “Mad About Music” is fresh and tuneful and heartwarming, and shouldn’t be missed.

"DRINGING UP BABY” is part romance, part farce, part vaudeville gag with performing animals. It opens with Cary Grant as a paleontologist working on the skeleton of a giant Brontosaurus, and closes with Katharine Hepburn mounted on a thirty-foot ladder making love to the professor across the Brontosaurus’s vertebral column. In between these episodes the two scramble about a Connecticut estate in pursuit of two leopards and a terrier, fall down banks and into streams, and get put in jail. Once Miss Hepburn loses the back of her skirt, and once, even more surprisingly, she loses

There’s a plot involving the loss of a section of the dinosaur which Asta, the terrier, has buried somewhere in the estate. But most of the time, especially in the middle sections, you have the feeling that Asta has buried the shooting script along with the clavicle and the director is

just making things up as he goes along. It’s top-rung dizzy comedy and often very funny. Katharine Hepburn takes her unexpected mussing-up with ease and good-nature.

SALLY, Irene and Mary” is grab-bag entertainment—a big musical stuffed haphazardly with every kind of talent. Sally, Irene and Mary (Alice Faye, Joan Davis and Marjorie Weaver) are three show girls looking for work. Life on Broadway brings them into contact with a down-and-out press agent (Fred Allen), an unemployed crooner (Tony Martin), an amorous baron (Gregory Ratoff), and Jimmie Durante, who apparently just wandered into the plot and then stayed on as handyman.

There are good bits in “Sally, Irene and Mary”—some tuneful songs which Alice Faye puts across pleasantly, a gypsy dance in which Gregory Ratoff and Joan Davis are rough enough to be funny, and a wild climax when a showboat loaded with night-club guests starts out on an unscheduled ferry trip. As usual, however, the complications of love and finance hold up the action; and while the various performers do their best with the plot, it’s hardly the best any of them are capable of.

The Goldwyn Follies.—Samuel Goldwyn's big specialty-and-spectacle show, with Gershwin tunes, baliets, the Ritz Brothers. Charlie McCarthy, and a burst of technicolor. The best of the season’s wonder-shows.

The Baroness and the Butler.—William Powell very smooth as the butler, and Annabels very snooty as the baroness. A little on the stuffy side.

Gold Is Where You Find It.—Brilliant technicolor description of the 1870 fight between the mining interests and the California farmers. With George Brent and Olivia de Havilland. Another epic film and worth seeing.

Disney triumph and worth seeing every night in the week. For all ages.

I’ll Take Romance.—Another Grace Moore song cycle. Plenty of romance, plenty of Puccini, and a good cast, including Melvyn Douglas and Helen Westiey. The Moore following will enjoy it.

Bad Man of Brimstone. — Old-fashioned Western, with Wallace Beery as a tough old homicide with a soft spot for romance. The production is up-to-date, but the story is very very ham.

Every Day's a Holiday.—Mae West in another survey of New York in the nineties. West fans will enjoy it.

The Awful Truth.—Divorce and its problems. Farcical and funny. With Irene Dunne, Cary Grant.

Hurricane.—Samuel Goldwyn’s hurricane, and the very best money could buy. A story of love and adventure in the South Seas goes with it. With Jon Hall, Dorothy Lamour. Exciting entertainment.

Rosalie.—Nelson Eddy and Eleanor Powell in a musical that is as big as all outdoors and looks almost as expensive. The producers could have made a better film with much

The Buccaneer.—Latest Cecil de Mille epic, with Fredric March as the bold privateer who saved New Orleans from the English. Exciting and well handled. A family film.

Big Broadcast of 1.938.—Elaborate musical show, describing, among other things, the maiden voyage of a streamlined steamer across the Atlantic. Since W. C. Fields heads the passenger list, there’s plenty of excitement. 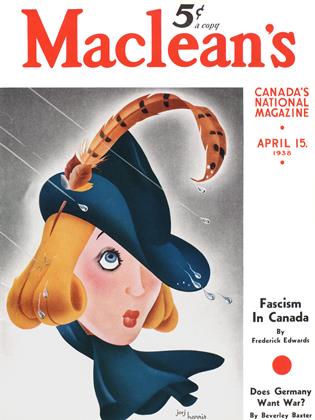