DOMINION census figures in 1931 placed the population of New Brunswick at 408,219, which is approximately the number of indignant New Brunswickers who have written to tell us that Saint John is in Saint John County, not King’s County, where we seem to have located it in Parade for April 1. We could crawl out of this by claiming it was just an April Fool jest, but that would not be true; so, as this apology is offered we are in a comer, face to the wall, a dunce’s cap upon our empty head.

Some of the letters were pretty darn mean. too. We got a big kick out of those, especially the ones which rebuking us sternly for our ignorance of New Brunswick geography, spelled Saint John as “St.” John.

Vital statistics with reservation item from the Acme (Alta.) Sentinel:

Don’t you believe anything you hear?

Under existing conditions it seems likely that nowhere in all this vast Dominion do our folks take their politics with more deadly seriousness than in Professor Aberhart's Province of Alberta. The sad plight of Mr. Slim Marshall, a farmer of Castor, Alta., is cited as evidence of the bitterness with which political battles are fought in that area. Mr. Slim Marshall, an ardent Liberal, made a wager with Mr. Norman Fawcett, a staunch Social Créditer, on the result of the Edmonton East by-election. Mr. Slim Marshall’s candidate lost, and Mr. Norman Fawcett’s candidate won. Therefore Mr. Slim Marshall had to walk from his farm to the town of Halkirk, a distance of about eight miles clad only in his underwear.

We don’t know whether or not Frank S. Hall, of 3323 Venables Street, Vancouver, has landed a job yet, either as an advertising man or an acrobat, but it is likely that he has. For entire frankness plus occupational coverage his notice at the top of the “Situations Wanted. Male” column of the Vancouver Sun seems to establish a new all-time high. Thus:

Can do anything from bouncer to bookkeeping: manager to massaging; salesman to sideshow spieling; wrestling to watchman; travelling to trucking ¡shovelling coal to sawing wood; advertising to acrobatics. Will try anything once; not afraid of work, but don’t like it. Don’t drink; can’t afford to.

The death of the Rev. Dr. Bingham a few weeks back, at the ripe old age of ninety-five, leads one Parade correspondent to bring forward some interesting facts regarding the remarkable Bingham family of Protestant clergymen. The late Dr. Bingham had four sons, and all of them were, or are, ministers. Three are still living and active in the service of their respective congregations. One predeceased his father. All five of the Reverends Bingham grew up to be* big, stalwrart men, over six feet in height, the tallest son standing six feet three inches in his socks.

The Rev. H. H. Bingham, pastor of Walmer Road Baptist Church, Toronto, says he knows of only one other contemporary family—living in England attaining a similar achievement of ministerial endeavor, and none with an equal record of unusual clerical stature.

And while we are in this more or less cloistered mood, we’d like you to know about the Church of England ecclesiastic who was a guest at a Vancouver hotel not long ago. Every night when he retired he found his bedroom slippers neatly placed for his w'eary feet, and his billowy white surplice carefully spread out on the counterpane. The maid in attendance, belonging doubtless to one of the less ritualistic denominations, and so being unfamiliar with the vestments of the Anglican Church, was persistently mistaking the surplice for a nightgown. A gentle and kindly soul, the clergyman said never a word about the error, just draped the canonical garment back over the hanger on which it belonged.

British people are proud, and rightly, of their national reputation for thoroughness. Even so, our worthy colleagues in the London (Eng.) offices of the MacLean Publishing Company w'ere more than a trifle astonished when, through the services of the G.P.O., there were delivered on a morning recently, four sets of complimentary tickets for a concert to be given at Wigmore Hall by Pianist Gabrielle Methot and the Loewenguth String Quartet. In each case the tickets were separately addressed to the Music Critic. The MacLean publications so honored were: the Canadian Grocer. Canadian Paint and Varnish Magazine, Canadian Machinery, and Modern Power and Engineering.

Right on the heels of the issue of Maclean s Magazine containing Charles Lugrin Shaw’s article, “Zeballos Gold Rush,” arrived a copy of Vol. 1 No. 1. of the Zeballos Miner. The exhibit is now a valued addition to our archives, filed under, "Evidence That There are Still Pioneers in Canada.” A four-page, tabloid-size weekly, the Zeballos fyíiner has everything we ever looked for in the primitive news sheets of thirty years ago, down to the detail of a two-column advertisement commanding the world in one crisp sentence to; “Watch Zeballos Grow!” Business in Zeballos, we learn, is booming, G. R. Holland’s General Store building is assuming shape, and the foundation has been laid for Harry Kent’s pool .hall. There are some differences from the old days, certainly, differences that serve sharply to emphasize the fact that this is a stirring world we are living in. Never in other similar pioneer newspapers of years back could we have read that : "Mr. and Mrs. Ray Petre went by plane to Victoria ;” or that, “Canadian Airways plane w'ith Pilot Small, flew Phil Seffem in from Vancouver on Wednesday. He flew back Friday.” Such items are quite definitely of 1938; but there is a distinct nostalgic flavor of the simple life about this “Classified” advertisement:

NOTICE—Anyone finding a dead, or very sick sea gull, on the beach kindly cut it open and see if my jackknife—open—is inside it.

The sea gull swallow'ed my knife and flew away with it. Mickey Nicholson.

James Cullins is editor and publisher of the Zeballos Miner. Congratulations, brother, and good luck! say we.

Three want ads., arriving from widely separated cities, have been turned over to our Further Details Required Department. Thus:

is a front-page streamer from the Fredericton Mail; while this caption appeared under a picture in the Saint John T elegraphJournal:

We hear of a gentleman in London, Ont., who is disturbed more than a little at what he fears may indicate a trend. He was browsing around in a bookstore when a dusty, tired-looking chap came in. loosened the strings from a brown paper parcel he carried under an arm, and dumped out on the counter an assortment of brightly lithographed wall mottoes and Biblical texts. From the conversation that followed, our reporter gathered that the unhappy man had been endeavoring to make house to house sales of these uplifting decorations on a commission basis, but, alas, entirely withoiN success.

“There ain’t no call for the Ten Commandments these days,” he told the bookseller sadly. 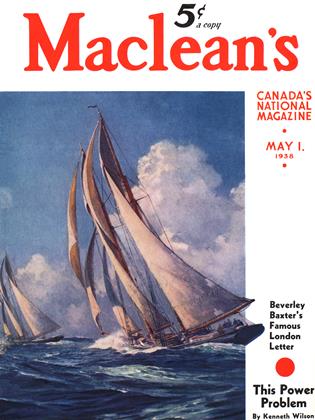