SUPPOSE YOU are aboard a train speeding through Ontario’s Northland, with two weeks of gloriously free summer vacation ahead of you. Weather’s right, place is right and time's right, so there is nothing to prevent this vacation from being the finest ever.

Then suppose you get off the train as it pulls into a small Muskoka summer resort and look up at the station, the first glimpse of your vacation spot. What would you say if the first thing you saw was a large sign saying, “Go Home!”

A fine way to welcome visitors. A big help to a vacationist with two weeks ahead and nothing to do but enjoy them. Go borne, indeed !

If that were the case, you would be justified in thinking so. But Go Home is merely the name of the place. Go Home is just one of Canada’s freak names. There are lots of them.

You wouldn’t be very much attracted to a place called Horsefly (B.C.) or Bury (Que.). Old Barns (N.S.) seems an unattractive name for A vacation place. Stand Off (Alta.) is just about as bad as Go Home.

But there are places with names that are attractive, and, fortunately, the attractive names are more numerous than the unattractive. Take, for instance, Alert, in the Cochrane district of Ontario. A bright name. One with special attraction to the epicure would be Cereal (Alta.) cr Chocolate Cove (N.B.). Cheese specialists would be at home in Oka (Que.) and likers of fine old drinks would flock to Rye (Ont.), Whisky Gap (Alta.), and Wine River (N.B.). The teetotaller might favor Sober Island (N.S.) or Soda Creek (B.C.).

Sweet tooths would be attracted to a place with a name such as Sugar Loaf (N.S.).

Another for the epicure, but repulsive to the chef on his vacation, would be Cooking Lake, in Alberta.

Y\7HETHER it be to attract visitors or

* ▼ to spur prospective residents on to definite action, many Canadian towns and villages have adopted names that sound exceedingly attractive, speaking descriptively. In other words, by their names you shall know them; at least, so hoped the persons who were responsible for naming such places as Advance, in Ontario’s Algoma district, Eden (Ontario and Manitoba), Garden of Eden in Nova Scotia, Foremost in Alberta. Onward in Saskatchewan, Paradise in Nova Scotia, Progress in British Columbia, Success in Saskatchewan, Superb in Saskatchewan, Utopia in Ontario; and, for the tired businessman, Woman River, Ontario.

The aviator might react favorably to a name like Aerial (Alta.), and, as well, to a place named Birdtail (Man.). Lindbergh (Alta.) might hold some attraction to a flier, as might The Hawk (N.S.).

There are always people anxious to make money. They might find an enjoyable vacation spot in Black Diamond (Alta,), or in such spots as Economy Point (N.S.), Gilt Edge (Alta.), Lower Economy (N.S.), Revenue (Sask.), Reward (Sask.), Richer (Man.), Penny (B.C.), Plenty (Sask.), Prosperity (Alta.), or even a place called Scrip. Scrip is not, as might be suspected, in Alberta. But it is next door, in Saskatchewan.

HTHE WORD “vacation” is practically always connected in some way or another with the word “romance.” Boys and girls, carefree and away from the worries of office or shop, usually let loose while on summer vacation, and romance very often turns up where they are. If one should set out with that purpose in mind,

it would be a good idea to go to some such place as Corner Of The Beach (Que.) for seclusion. Or one might try Dance (Ont.). If the weather be cold, possibly Chimney Corner (N.S.) would be preferable. Moonbeam (Ont.) is always a help to romance. But to get right down to this love business, why not go directly to Romance (Sask.) itself? Sundown (Man.) is always helpful too, and in some cases, Sunrise (N.S.).

But, if romance is where one is heading for, it would be wise to drift in a direction opposite from Parents (N.B.), Seven Persons (Alta.).

If you are looking for entertainment, why not go to Cinema (B.C.), or to Conjuring Creek (Alta.)? Centennial (N.S.) is bound to have something or other going on all the time. Mystery Lake (Alta.) or Mystic (Que.) might produce something in the way of fortunetelling or magic tricks. Old Harry (Que.) sounds as if he might have some good stories. Shakespeare (Ont.) should provide some worth-while reading.

Maybe you want to have a good rest and quiet and peace. Well, you can go to Freedom (Alta.), and escape a lot of things. Or you can go to Ha ! Ha ! Bay, in Quebec, for relaxation. If you want to talk, try Chin (Alta.). Ontario offers the vacationist in search of peace a place called in translation Without Care (Sans Souci), and Quebec entices him with Without Noise (Sans Bruit).

The Old Soldier has his vacation place too, in Veteran (Alta.). He might also go to Wartime (Sask.), Swords (Ont.), Patriot (Sask.), Red Cross (Sask.), Canuck (Sask.), or, with memories of France, Burnt Church (N.B.). A wounded soldier could go to The Slash (Ont.).

For those out for travelling as far and as fast as they can, there are Forget (Sask.), Highway (Alta.), 100 Mile House, 150 Mile House and 70 Mile House, all in British Columbia; Sharp Comers (Ont,); and they might even come across a place, although located in Nova Scotia, Canada, which is named Cross Roads, Ohio.

Engineers interested in building dams and things could hie their way to Hydraulic (B.C,), Hydro (Ont.), Science Hill (Ont.), and Waterways, located, of all places, in Alberta.

Canada’s Governors-General have not been forgotten in names in this land. Witness such places as Byng Inlet (Ont.), Bessborough (B.C.), Minto (Man., Ont., and N.B.), and Buchan (Man.).

Foreign lands appear in Canada too. There are New Germany (Ont., and N.S.), New Ireland (Que.), New Norway (Alta.), and even New Canada (N.S,). Italy might be represented by Benito (Man.).

1er can go almost any place in the world without stepping outside a Canadian boundary. Try this:

HTHE LAND of plenty might be in the vicinity of Abound (Sask.). Free of acid is Alkali Lake (B.C.). Fireproof is Asbestos (Que.). Rates of British monetary exchange appear in Jumping Pound (Alta.), and cigarettes are known in Lucky Strike (Alta.). The King might live in Monarch (Alta.).

The town of Needles (B.C.) could easily be stuck-up and with good reason. Some town might claim to be rainy, but there is always Rainier (Alta.). Red Head (N.B.) should have been included in the romantic names. Pickle Crow (Ont.) is not an attractive-sounding dish. Pioneer (Alta.) must be an old-timer. Product (Sask.) and Prospect (N.S. and Ont.) are relative to mining.

Sideview (Alta.) gives you the wrong slant on things, and ends up with a Surprise (Sask.). Telegraph Creek (B.C.) is modern enough. For contrast, Saskatchewan has both Tiny and Titanic.

The Saints and Saintes abound in Canada; a rough count reveals more than 900 names of places starting with either St. or Ste.

To show up Canadian sports, the town of Winter (Sask.) appears. Dog Pound (Alta.) is a bad place for canines. Eyebrow (Sask.) is sure to be seen on the face of the earth. Five Fingers (N.B.) sounds like an order over the old-time bar. Floating Stone (Alta.) and Flowing Well (Sask.) are somehow connected. Headquarters (B.C.) sounds military.

And to give this scrambled section an appropriate ending, we arrive at Climax, Saskatchewan.

T)Y TREATING ordinary typewriter paper with a solution of diethyl phthalate (a synthetic material used to soften cellulose acetate and as a fixative in perfumes), it can be rendered transparent enough to allow blueprints to be made through it. Letters, drawings, and handwritten documents can be easily copied by the blueprinting process after they have been treated in this manner.—Scientific American. 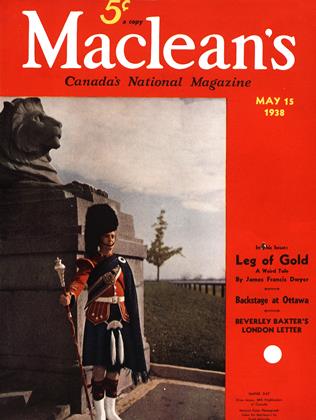