TEST PILOT” brings us an exciting and expert air drama combined with an honest human story. We have had the story of the reckless flyer and his worried sweetheart before on the screen often enough, but it has rarely been handled with such brilliant showmanship and genuine human insight as it is here. Clark Gable is the flying hero, Spencer Tracy his mechanic, and Myrna Loy the girl who elopes with the airman after he grounds on the family farm. In a triangle of this sort someone has to come to grief, and it is Spencer Tracy who draws the short straw.

All this is highly familiar; but the treatment of ‘‘Test Pilot” is fresh and vivid enough to make you feel you are seeing an air drama on the screen for the first time. All three stars have parts cut to their very best measurements, and play up to them

beautifully. “Test Pilot” runs for two hours and doesn’t drag for a minute.

TOE E. BROWN’S latest film might have J been very funny if Damon Runyon had had a finger in the plot. It’s a Runyon type of story—the notion of a simple soda jerker whose accidental contact with a gangster brings all the public enemies in the country swarming to the hero’s home town. Unfortunately, less inventive minds were put to work on it; and the result is mostly noise, slapstick, chase sequences, and many many close-ups of Joe E. Brown’s wide-open face. Joe E. Brown’s fans may enjoy his latest film. Nonadmirers may find it the sort of comedy that rolls them in the aisle and right along to the nearest exit.

Storm in a Teacup

STORM IN A TEACUP” is a shrewd.

neatly turned comedy, as Scotch as a thistle and as full of surprises. Provost Gow of Baikie (Cecil Parker) is a pompous

vote-catching politician well on his way to Parliament when he makes the error of seizing Mrs. Honoria Hegerty’s sheep dog, Patsy, for back taxes. A bright young reporter (Rex Harrison) comes to Patsy’s defense in the local paper; and after that it’s anybody’s dog-fight. “Storm in a Teacup” is hilarious satire on politics, Parliament and the judiciary system, with plenty of sense under its nonsense. Most movie goers will find it a wonderful relief after the recent round of dizzy comedies, which send one out wondering if it is the producers or ourselves who are going crazy. Don’t miss it.

SAILING ALONG” is another screen musical show of a stage musical show — a formula of which producers never seem to tire. Dancer Jessie Matthews never seems to tire either, and her nimbleness

and energy keep the picture sailing along at a fair if not excessive rate. She’s a barge Cinderella here, cute and cockney in simple gingham. A Soup King (Roland Young) with an eye for talent happens along, gets her into some good clothes and better society, and promotes her to fame amid about a million dollars worth of production. Love and her true barge mate (Barry Mackay) aren’t neglected, of course. Pleasant songs and lively dancing help to make up for a routine plot and occasional moments when the picture moves at much the rate of the heroine’s barge.

TN “Her Jungle Love” Dorothy Lamour •L lives all alone on a tropical island with only a lion cub and a chimpanzee to keep her company. We aren’t told where the lion cub came from, or her printed crepe sarong and T-strap sandals; nor how she mastered English in two or three easy lessons. Other unexplained details: Ray Milland bums off the rope which binds his wrists by holding his bands over a blazing altar fire, and doesn’t even injure

the cuticle. Dorothy jumps off a sea-going yacht part way to America and swims back to her South Sea island unassisted, without as much as a sea biscuit in her sarong. “Her Jungle Love” is smash hokum, with one huge “effect” piled on another. But it’s entertaining as spectacle, and as wild comedy played straight.

The Adventures of Marco Polo

THE Adventures of Marco Polo” takes both history and continents at a hop, skip and jump, covering Marco Polo’s famous trip from Venice to Peking in three or four brisk sequences. Once Marco (Gary Cooper) is established in the palace of Kublai Khan and romantically involved with the Khan’s pretty daughter (Sigrid Gurie) the picture becomes more explicit, less historical. In Peking, Kublai Khan’s Prime Minister (Basil Rathbone, the screen’s most polished meanie) is busy making trouble for everyone—for the Khan, the Princess, and most of all for Marco Polo. In the end, of course, he meets a fate exactly as awful as the one he reserved for his most cherished enemies.

“The Adventures of Marco Polo” is rather oddly cast, with honest George

Barbier as the formidable Khan and Binnie Barnes as a Mongolian matron. But it provides thrills, spectacle, intrigue, stunning sets and high romance, and shouldn’t be missed. 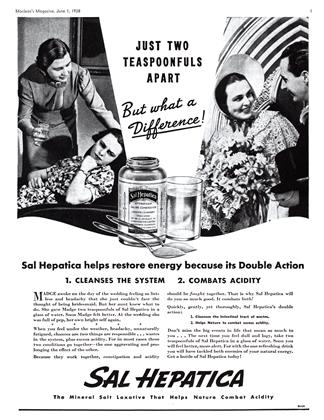