The Adventures of Robin Hood

THE Adventures of Robin Hood" is one of those wonder shows that come along once in a while and rock even the publicity writers back on their heels. This was lusty spectacle seventeen years ago, when Douglas Fairbanks, Sr., played the gallant Robin who fought princes and barons and established himself as a sort of unofficial relief administrator, robbing the rich to help the poor. \Varner Brothers have now taken over the legend, poured their millions into it, and given it a brilliant cast.

Errol Flynn doesn’t display quite the agility of Douglas Fairbanks, who in the old days bounded from the heights of battlements and back like a twelfthcentury Tarzan. Still, Actor Flynn gets

about in a sufficiently lively fashion, and is handsome and romantic enough for anyone. Pretty Olivia de Havilland is Maid Marian, and Basil Rathbone contributes the black-hearted villainy and intrigue which are his special department, ‘‘The Adventures of Robin Hood” has the fine sweep and action of the best silent days, and all the sound and splendor of the modern screen. One of the season’s finest films.

r"PHE CAST of “Vivacious Lady” is A considerably better than its story. In fact the acting is so good that it almost

lifts a rather farfetched bedroom farce into grade A comedy. A young biology professor (James Stewart) meets, courts and marries, all in a few hours, a New York cabaret entertainer (Ginger Rogers). He takes her to his college town, and the problem of the director is to keep bride and bridegroom apart till the conventions are satisfied and the bride is properly introduced to society.

A great deal of ingenuity and adroit sidestepping have been employed to keep the plot moving, and the predicament of the frustrated honeymooners this side of censorship. Ginger Rogers, who seems to be able to turn her hand to anything on the screen, is bright and believable in a straight part; and the supporting cast (Beulah Bondi, Charles Coburn, James Ellison) manage to keep a nice balance between the ribald and respectable

elements in the story. There’s more plottwisting than plot to “Vivacious Lady,” but as entertainment it’s lively and bright.

/COLLEGE SWING” opens rather unexpectedly in a New England log schoolhouse of 1738. But when Gracie Allen turns up in a poke bonnet, the Puritan atmosphere is dispelled. The story lightly skips a couple of hundred years, and we are right in the midst of one of those college musicals which are as completely unlike anything in college as they are exactly like each other. Gracie takes

charge of the college, which has been irresponsibly left to her, and it isn’t long before the story more or less bows itself out and things go into the usual vaudeville pandemonium.

Martha Raye makes her appearance in a wardrobe that Dietrich wouldn’t be too proud to wear; but her wardrobe doesn’t interfere with her clowning, which is as muscular and free-for-all as ever. Gracie Allen is teamed this time with Edward Everett Horton; and George Burns, with

no particular reason for turning up, turns up anyway. So does Jackie Coogan. Almost everyone you’ve ever seen in college musicals is present in some capacity, except the Ritz boys, whose place has been taken by the Slate Brothers so that you’d hardly notice the difference.

TRENE DUNNE is a Broadway musical

star in her latest film, and her life is just one long chore of singing, rehearsing, signing autographs, and supporting her worthless family. Douglas Fairbanks, Jr., is a gay young sportsman with no responsibilities, no job, no family, and a lot of bright ideas for making the heroine get rid of hers. His principal obsession is to carry her off to an atoll in the South Seas, and as an introduction to the joy of living he takes her out for an evening of roller skating.

This is the big comedy sequence of the picture, and Miss Dunne, under the stimulus of love and quantities of beer, is as uproarious as only the more ladylike girls on the screen can be. There are plenty of difficulties, some of them pretty labored, before she finally comes round to his way of thinking, walks out on her family, and heads for the South Seas without as much as a sarong in her handbag. If “Joy of Living” doesn’t seem quite as spontaneous as "The Awful Truth,” it’s

probably just because it came later in the cycle. On its own merits, it’s lively entertainment.

The Divorce of Lady X

TN THE opening sequence of “The

Divorce of Lady X” Merle Oberon bursts into a stranger’s hotel bedroom, and while his back is turned steals his pyjamas and climbs into his bed. The director has to prove that, though she behaves in this peculiar way, she’s really just a nice girl who needs a good night's sleep. It’s a tough assignment, and no directorial skill in the world could make the first ten minutes seem smooth and 1 convincing or pretty Miss Oberon anyI thing but an annoying pest.

Once the point is made, however, the I picture settles down to first-rate comedy, I thanks chiefly to Ralph Richardson’s I wonderful impersonation of the divorceI seeking peer, Lord Mere. Binnie Barnes, her blond good looks brilliantly highlighted by technicolor, is a great help to the comedy and a pleasure to look at. The I technicolor itself is admirable, joyously bright and clear, the English country settings look like something you would like to hang on your wall, and all" the people seem unreally beautiful instead of just unreal.

YYTOMEN ARE LIKE THAT” is a ^ ’ picture about the troubles, business I and marital, of a lady advertiser. I can’t fl imagine anybody getting much fun out of I it except other lady advertisers who like to I talk shop or hear it talked. Problems of I business and the married business woman fl are discussed endlessly. Sometimes the I heroine (Kay Francis) talks about adverI tising to her husband, and once she gives a fl good long talk about her husband to a I group of lady advertisers.

There’s very little amusement in all I this for the movie-goer. Even Miss I Francis’ clothes, which as a rule are a good fl deal more distinguished than her stories, ■ are tacky and unbecoming in this film. In I almost every respect “Women Are Like I That” seems to be aimed straight away I from the box office. It looks as though I someone in the industry had something I against poor Kay Francis.

Test Pilot.—Clark Gable, Myrna Loy and I Spencer Tracy in the best air drama of many I seasons. Highly recommended.

Storm in a Teacup.—Bright English comedy involving a dog, his license, and a politician. I With Vivien Leigh. For adults and bright I adolescents.

Her Jungle Love.—Crocodile worship, a I volcanic eruption and Dorothy Lamour in her I sarong, provide the major excitements. In I technicolor. As a technical achievement “Her I Jungle Love” is wonderful. As a story it's I nonsense.

In Old Chicago.—What life in Chicago did I to the O’Leary family. And what Mother R O'Leary's cow did to Chicago. A good story ■ and a magnificent spectacle.

The Girl of the Golden West.—Old-fashioned R Western, with Jeanette MacDonald and Nel■ son Eddy in singing roles. The producers have I made a good thorough job of everything but ■ the cutting. Young people will enjoy it.

The Adventures of Tom Sawyer.—Excellent adaptation of the Mark Twain classic. With Tommy Kelly as Tom and May Robson as Aunt Polly. The final sequences are rather too terrifying for very young people.

The Adventures of Marco Polo.—Very tall traveller's tale, with Gary Cooper as the twelfth-century explorer. With Sigrid Gurie.

A good exciting adventure story which the family will enjoy.

Bringing Up Baby.—Katharine Hepburn and Cary Grant in a mixup with a Brontosaurus, a terrier and two leopards. Preposterous but fairly amusing. 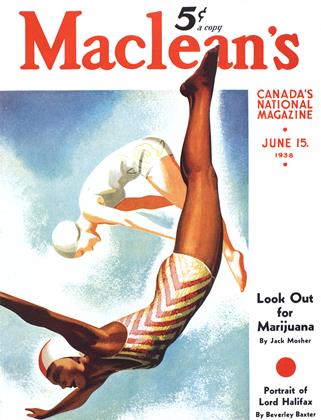