HOW WOULD you like to be attending the graduation ceremonies of the University of Toronto or Queen’s, or McGill, or the University of Manitoba as a curious visitor, and suddenly hear your name called, with an invitation to come forward and receive the university’s highest honorary

That will give you a remote idea of what happened to Norman Reilly Raine, the Toronto writer, whose creation, “Tugboat Annie,” will live as long as the memory of Marie Dressier, a fellow-Canadian from Cobourg, Ontario.

Raine is a reserve officer of the regiment and attached to the Toronto garrison.

With his wife. Norman was seated inconspicuously at the annual dinner of the Academy of Motion Picture Arts and Sciences in Hollywood. It was his first visit, and he had come out of curiosity and an admiration of his fellow craftsmen.

He was discussing the next award when his name rang out and filmdom’s assembled royalty broke into applause. To Norman Reilly Raine for the best screen play of the year, “The Life of Emile Zola,” announced the chairman. Then came the names of the other two who collaborated. There isn’t one among Hollywood's toiling thousands who wouldn’t pass up the Kohinoor Diamond for the miniature gold statue that symbolizes this honor.

The red-headed Canuck was so frozen to his chair that they had to pry him loose for the march to the head table and the coveted trophy.

Raine hadn’t the slightest inkling that the award would be his. Academy rules, in fairness to Hollywood's 400 newspaper correspondents, call for strict secrecy until the Academy dinner. Raine thought highly of “Zola.” It won several awards besides the one Raine helped bring it. But he hadn't included himself in bis surmises.

I learned this and much more as I chatted with Norman Reilly Raine in his office at Warner Brothers’ studios. He had just finished working on “Robin Hood” and was resting before tackling “Each Dawn I Die,” which is to be a story of prison life, 1 remarked that, while the Academy awards were big news to Europe and the United States, Canada had paid scant attention to this new distinction of a native son.

“Canada.” said Raine, “seems to have less appreciation for Hollywood than Hollywood has for Canada.” f asked him to explain.

“It appears that there exists an indifference at home to the doings of the film capital. They won’t take Hollywood seriously. Yet hundreds of Canadians work here in every branch of the industry and are thoroughly welcome. Dozens have distinguished themselves. The world honors them, but Canada pays little attention.

“Lately Hollywood has turned to Canada for story material of historic and dramatic value. Right now ‘Northwest Passage’ is being filmed. It contains an interesting phase of Canadian history—that of Rogers’ Rangers.

“Rogers’ Rangers were organized in the early days by Major Rogers to fight the French and Indians. The War Office made them part of the Queen’s Rangers, They had the best record of either side during the Revolutionary War. They were sent to Canada afterward. The Queen’s Own of today is the Rogers’ Rangers of yesterday.”

Norman Reilly Raine’s own war experience is a tribute to the spirit of adventure. It intrigued him early and is still his master. He was a reporter on a Buffalo newspaper when the Great War broke out. Though only eighteen, he couldn’t wait to get into it. So he crossed to Fort Erie and joined. Casualties were heavy in those early days and battalions were being reorganized constantly. Raine was in three before being transferred to the Medical Corps. The last part of the War found him in the Royal Air Force.

He was discharged at Toronto in 1919 and still regards it as his home. He is married to a Toronto girl, the former Joyce Pett.

What was the path that led to Hollywood?

“You know,” he said, “I’ve only had three rejection slips in all my literary life.” He expected my surprise.

“It’s not as easy as it sounds,” he laughed. “I had always wanted to write and I determined to do my best. So I set a harsh standard for myself. I wrote and rewrote endlessly, until I was convinced that the article or story represented the best that was in me. Then I sent it out.”

It was Vernon Mackenzie, then editor of Maclean's Magazine, who spurred Raine, and for him Raine has a great affection. Years later it was Mackenzie who was indirectly responsible for the creation of “Tugboat Annie” and for Raine going to Hollywood.

The swashbuckling young scribbler had become greatly interested in the sea. He wanted to write about it but felt he wasn’t equipped properly—according to his own standards of work. The way to learn about the sea was to live and work on it. Raine became a sailor, and for three years tramped the ocean on all sorts of tubs.

Even after he had gone back to the land, he found no practical use for his marine knowledge. He was making progress as a writer in Maclean's, Saturday Evening Post and other magazines, but had to sell printing, gadgets, etc., to keep eating. He was married in Toronto in 1928. Mr. and Mrs. Raine were in Italy when a message came from Vernon Mackenzie.

VERNON MACKENZIE, after having served as an editor of Cosmopolitan, had become the Dean of Journalism at the University of Washington in Seattle. Would Norman like to join the faculty as a lecturer on journalism? It would occupy him for only three months.

So Raine went to Seattle for three months, and stayed three months and a year. Besides journalism, he conducted classes in the short story. It was in Seattle that his years on the water proved their value. It was here that “Tugboat Annie” was born. Keeping her alive for the public benefit added a year to his stay.

Hollywood heard of “Tugboat Annie” and invited her creator to present her through its medium. Dressler’s superb characterization brought him a joy known only to the heart of a writer. But the peculiarities of the strangest town on earth bewildered him. Hollywood, be it known, has the highest percentage of nervous breakdowns of any city in the world. He wasn’t happy. Annie having made her debut, he prepared to leave.

Somebody at Warner Brothers got the idea that Raine might be useful. Flattered, Raine moved to their studios. He got a chance to assert himself, and his feeling for Hollywood changed. They gave him good assignments and he proved his

worth. He worked on such pictures as “God’s Country and the Woman,” “The Perfect Specimen,” “Mountain Justice,” and “Men Are Such Fools.” He has just turned in the screen play of “The Sea Wolf”—famed vehicle in the silent days of another Ontario boy, the late Milton Sills.

T-TOLLYWOOD writers, like writers everywhere, are regarded as an improvident lot. The rewards are much greater here, but the money seems to go faster. We discussed the strange case of Pierre Collings—a story that disturbed Hollywood greatly while it lasted. And this is the story.

A young hopeful, like the thousands of others who come here, was given a night’s . lodging for cleaning up the yard of a cheap j boardinghouse. In his room was a closet ! used to store odds and ends seized in lieu ' of room rent. The young fellow poked around in it and found an old sweater.

The sweater was wrapped around some hard object. He unwrapped it and found a miniature gold statue—the Academy Award! He hunted up a writer of his acquaintance and they took his find to the Academy offices. The records showed that it had been awarded to Pierre Collings in 1936 for writing “Louis Pasteur.” Like Raine, Collings had served to bring honor to himself, Paul Muni and Warner Brothers.

Yet Pierre Collings had died in poverty and his precious prize lay tossed in a closet corner. When illness overtook him and impaired his earning capacity, he hadn’t enough of the money Hollywood had paid him to secure medical attention and comfortable surroundings. Probably ashamed, he had kept his needs to himself.

“That,” said Raine, “is one of Hollywood’s greatest dangers. So many who are successful here lose their perspective. ; These isolate themselves until the world i outside becomes a vague thing. Their values change. They forget their former standard of living, as though nothing would ever change for them.

“I can understand why people on the outside occasionally show resentment. They don’t object to the size of Hollywood earnings. But people living well on average salaries can't sympathize with former stars who finish broke after making more each week than they do in a year or more.

“The successful Hollywood person who gets one of these large salaries should make it a point of spending time in normal environments- parks, offices, factories. It would keep his values intact and make him a better craftsman.

“Most of Hollywood is normal, hardworking and honest, though.”

X_T AS the value of the screen as a medium of education been hampered by the emphasis which Hollywood places on entertainment? Raine doesn’t think so.

“Motion pictures,” he told me, “are unacceptable to the public unless fashioned primarily as entertainment. Various groups attack Hollywood regularly for the moral and intellectual tone of the screen. But offer the public films in which entertainment is secondary and they stay out of the theatres.”

That was his chief thought while writing “Zola.” It had a message, but the message alone could not make a picture. The story was available in libraries everywhere. To

make a movie of it, the story and its message had to l>e interwoven with drama and entertainment.

challenge of the scenarist or playwright. The educated are ready to jump on you for distortion. That problem doesn’t exist when the plot is fictional.”

The screen, he told me, is as exacting as any medium and more difficult than most. Many fine literary craftsmen in other fields fail at writing scenarios.

its nearest neighbor, the stage. The screen is basically visual. Novels suggest, and the stage is visual and verbal. People come to the movies to see firstly and hear secondly. It requires much more scope and action to build a picture. Nothing can be referred to but must be shown. Everything must be highly personalized. To be successful at writing for the screen, the writer must realize these things.” 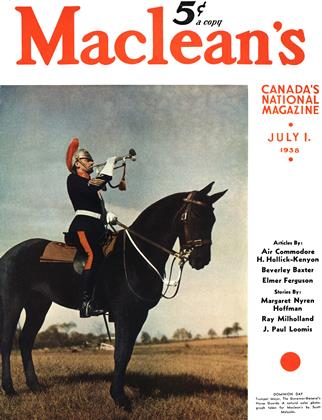