YELLOW JACK” has magnificent material to work with—the experiment conducted by Major Reed, at the time of the Cuban War, to discover the cause of yellow fever. Since microbe hunting involves heroism, suspense and sudden death at the hands of a mysterious enemy, “Yellow Jack” has all the drama of a war film and all the excitement of a murder mystery. The best sequences are naturally the ones dealing with Major Reed’s (Lewis Stone’s) mosquito-inoculation of a volunteer group of soldiers headed by Sergeant O’Hara (Robert Montgomery). The weakest are the romantic sequences between Sergeant O’Hara and a pretty nurse (Virginia Bruce). Love interest in a film of this sort is just so much tangle-footage; and, besides, no one nursing through an epidemic in the tropics could ever look as cool, starched, finger-waved and beautiful as Virginia Bruce does here. As a whole, however, “Yellow Jack” is a fine worthwhile picture that just misses being a great one.

JUST when she needed it most, Katharine Hepburn has been starred in an excellent comedy drama with a fine supporting company and a top-flight director. “Holiday” is a remake of the film that brought Ann Harding to fame eight years ago.

The picture has been pointed up with fresh dialogue by Donald Ogden Stewart, but the basic theme—that wealth doesn’t mean happiness—remains unchanged. This is something everyone admits and no one believes. It sounds unusually plausible here, however, thanks to an excellent script, George Cukor’s fluent direction, and most of all to Katharine Hepburn’s spirited performance as the rich heroine who thought a young man had a right to be poor if he felt like it. Cary Grant is the young man, excellent this time in a straight part. “Holiday” is a highly successful remake of a good play. It should be just as successful a remake of a fine actress.

JOAN BLONDELL is cast once more as an amateur lady-detective in “There’s Always a Woman,” this time as the wife of a professional detective (Melvyn Douglas). As an energetic matron whose back-seat sleuthing constantly interferes with her husband’s plans, she is often

funny, continuously rowdy. Gum-shoe methods, either in comedy or sleuthing, don’t appeal to Miss Blondell, and many people will find Melvyn Douglas, who takes things more quietly, easier to watch. These two have the screen pretty much between them in “There’s Always a Woman,” which is a murder mystery with lively dialogue, plenty of excitement, and a plot that moves almost as fast as Miss Blondell. Good hot-weather entertainment.

OF HUMAN HEARTS” starts off extremely well, with a fine flinty performance by Walter Huston as an oldtime circuit rider, some persuasive family scenes, and some good sharp descriptions of old-time Ohio folk who kept their religion for Sundays. But once the son grows up and goes off to the Civil War. the story falls apart disastrously. With scarcely any warning the hero (James Stewart) turns into such an incredible heel that President Lincoln himself has to call him to Washington to lecture him on his neglect of his old widowed mother (Beulah Bondi). Since there’s plenty of shameless ingratitude in the world, there may be sons in real life who make their poor old mothers sell their wedding rings and family pets to provide them with spending money. But it all sounds like shameless hokum in the movies.

The Adventures of Robin Hood.—Beautiful and exciting technicolor version of the famous Robin Hood legend. With Errol Flynn, Olivia de Havilland. For everybody.

Vivacious Lady.—Ginger Rogers and James Stewart in a neat and lively college-town comedy. For adults.

The Adventures of Tom Sawyer.—A faithful and well-handled version of the Mark Twain classic. With Tommy Kelly as Tom. The final sequences are a little too grim for junior members of the family.

Test Pilot.—This is one of the best pictures of the year; and the best flying picture of several seasons. With Clark Gable, Myrna Loy and Spencer Tracy. Everybody over ten years of age should enjoy it.

The Adventures of Marco Polo.—Gary Cooper as the XII Century Italian explorer who made the first business trip to Peking. Preposterous but lively.

Her Jungle Love.—One of the season's most spectacular pictures. Also one of the silliest. Crocodile worship, volcanic eruptions and Dorothy Lamour in a sarong, provide the major excitements.

Kidnapped.—Takes its title, but very little else, from the Robert Louis Stevenson adventure tale. With Freddie Bartholomew. Warner Baxter. Arleen Whelan. Fair entertainment if you're not looking for Stevenson. 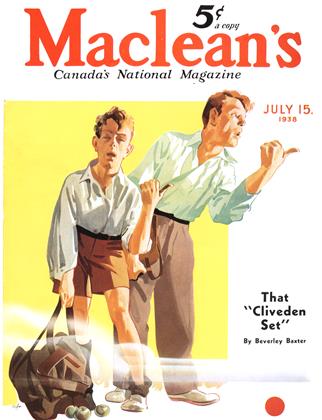