SINCERE congratulations are due Mr. E. E. (Ted) Bishop, ex-president of the Students’ Union of the University of Alberta, upon the recovery of his trousers. Well, anyway, a part of his trousers.

Every so often an incident is reported to Parade dealing with the embarrassing predicaments of unhappy gentlemen who contrive to lose their nether garments in public places, but it is our considered opinion that, in all these annals, Mr. Bishop’s experience is unique. It seems that a year ago Mr. Bishop and two friends were enjoying a vacation hiking along the old Rocky Mountain pack trails between Banff and Jasper. The weather was warm, and, tackling the long ascent of the Saskatchewan River Valley, the three men removed their pants, tied them to their packs, and continued the climb clad only in their underwear. At sundown it began to get chilly, and not until then did Mr. Bishop discover that he no longer had his trousers, a fine thing to happen to an ex-president of the Students’ Union of the University of Alberta. Somewhere back along the weary trail they had fallen from the pack, and were gone beyond recall. Mr. Bishop borrowed overalls from a member of a fortuitously encountered road gang, and went sorrowfully on his way.

Came June, 1938, and again we find our hero and his friends hiking through the Saskatchewan Valley, with Mr. Bishop stubbornly refusing to take off his new hiking breeches. At one point the party halted for a drink of water from the crystal clear stream. Bending over, Mr. Bishop caught sight of a gleam of something white lying in the river bed, and this object upon investigation proved to be a letter addressed to Mr. Bishop, which, when last he set eyes on it, had been in the pockets of his departed trousers. Excavating feverishly, Mr. Bishop dug from the stream the brown tweed remnants of his lost pants, and from the pockets salvaged a belt, another letter, a logbook with entries made up to noon on the day when disaster overtook him. a university registration card, a dentist’s bill, eleven cents in cash, a key-case, a fountain pen, a soggy billfold, one three-cent stamp, two street car tickets, and two boxes of utterly useless matches.

Mr. Bishop hasn’t yet made up his mind, but his friends are urging him to go and see what he can find in the Gobi Desert.

Our heart aches for the sorry plight of the municipal officers of Kitchener, Ont., who all have sore throats from trying to explain away a contretemps arising from the simple fact that the American Hotel of that city is undergoing alterations. Desiring to keep free from cars a certain area in front of the building, the management borrowed two “No Parking’’ signs and set them up at strategic locations. One is the usual simple warning. The other, more explicitly, reads: “No Parking. Reserved for Civic Officials.”

And they placed that one directly in front of the entrance to the hotel’s beverage room.

That splendid spirit of enterprise and resourcefulness which so well served the pioneers of Western Canada when they were confronted by apparently insurmountable difficulties, still endures, burning with a bright and deathless flame. For proof we present the example of the farm wife of Gladmar, Sask., who, unable to leave her home and lacking a telephone, was faced with an urgent necessity to get an important message to a neighbor. Observing the neighbor’s cow grazing placidly near by, the quick-witted woman wrote a letter, sealed it in a paper bag, tied the bag to one of the cow’s horns, spanked bossy sharply on the rump and shoved the animal off in the direction of home. Cow and letter arrived safely together, thereby considerably dimming the lustrous fame of the chap, so loudly applauded by the late Elbert Hubbard, who carried the message to Garcia. After all, he had two hands, didn’t he?

We like to think we’re really not so awfully dumb, but the significance concealed in recent pleasant carryings-on at the Technical School of London, Ont., escapes us completely. We admit we are baffled. At the London Technical School a member of the teaching staff is Mr. A. J. Walker. Mr. Walker has been a schoolteacher now for forty-three years, and in all that time he has never been absent, nor has he once been tardy. A notable record. The staff of the London Technical School held an annual picnic at Springbank Park not long ago, and it was decided, rightly so, that the occasion was a fitting one upon which to honor Mr. Walker, the man who had taught school for forty-three years and never once been absent or late. Mr. Walker’s co-workers clubbed together, and presented him w'ith—a clock.

We don’t know whether or not it was an alarm clock.

If we are to believe the Edmonton Bulletin—and why wouldn’t we?—that patronage argument at Ottawa between Mr. King and Mr. Bennett must have been hotter than anyone knows about. The Bulletin featured the catastrophe on Page One, under a banner headline with a two-column drop. Thus:

The ceremony was performed at the home of the bride’s parents on George Street, which was decorated with spring flowers by the Rev. George Telford.

That was real thoughtful of you, Reverend.

All owners of dogs in Elrose must be licensed under the local by-law on or before THURSDAY, JUNE 30, 1938 otherwise they will be shot immediately thereafter. By order of the Council.

Shocking state of affairs in magisterial circles in Nelson’ B.C., as exposed by the outspoken News, of that community:

McKenna on May 3 was sentenced to one month hard labor in Nelson jail by Donald McDonald, city police magistrate here, who was found guilty of stealing four turkeys from a local café.

Okay; but is the balance divided into twelve easy monthly payments?

Mr. D. S. Wright, of Vancouver, comes up with an entry in the longest-journey-for-the-shortest-price controversy, which started in Parade, ’way back last winter. Operative Wright reports:

When the South African War started, I was living with my people in Ireland. I joined up with the Irish Yeomanry, and while at Curragh Camp in County Kildare, wrote a letter to my brother, who was then living near Auckland, New' Zealand. He left Auckland about the same time that I mailed the letter, bound for Cape Town, where he joined up with Rimington’s Guides. The letter, of course, travelled to New Zealand, where it was' readdressed to him in South Africa. A year after I had written it, the two separate columns on which my brother and I were serving chanced, by the fortunes of war, to meet in camp at the same spot in the Orange Free State. For the first time in years wre got together, and while we were talking a convoy arrived from the railway, carrying mail. My sergeantmajor handed me a letter, w'ith the remark: “This must be for you, but the initials are wrong.” The letter wasn’t for me. It w-as the one I had written my brother from Curragh Camp. Ireland to New Zealand to Cape Town and then into the Orange Free State. That letter made a long journey on a penny stamp.

Mr. Wright adds that his brother and he served in the Great War, too, his brother with the New Zealanders, himself w'ith the C.E.F.

And we hear of an Edmonton evangelist of mighty zeal in the cause of righteousness who recently acquired a new' automobile. One of those huge, powerful 1938 models capable of almost any speed. Across the front bumpers of this impressive vehicle the preacher has strung this striking warning:

PREPARE TO MEET THY GOD! 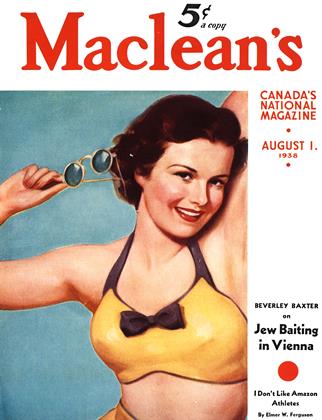