THIS IS about three chicken-raising sisters who decide to invest a small legacy in a rich husband. The girls have little to offer except their looks, but since they are Loretta Young, Marjorie Weaver and Pauline Moore, this is plenty. Loretta, being practical as well as beautiful. has the theory that it is as easy to fall in love with a rich man as with a poor one and a lot more comfortable. So the three head for Santa Barbara, Loretta posing as an heiress, and Marjorie and Pauline as maid and secretary. It isn’t long before Loretta sights two fine prospects in the persons of Joel McCrea and David Niven. But, as it turns out, the one she loves (Joel McCrea) needs an heiress as badly as she needs a millionaire; and the complications are enhanced by Binnie Barnes who wants Joel for herself.

It’s all very light and gay, and everyone is wonderfully dressed, including the boys who wear for dressier occasions tropical evening clothes enriched by cummerbunds. “Three Blind Mice” won’t weigh you down with its problems. But who wants to be weighed down in hot weather?

'VT'OU AND ME” may not be the year’s most distinguished picture, but it is certainly one of the oddest. Directed by Fritz Lang, it is a weird combination of impressionistic cinema, social philosophy and old-time hokum. This is the story of prison-paroled people working in a departmental store which engages in rehabilitation side by side with retail trade. The lesson of the film is that crime doesn’t pay; and Sylvia Sidney demonstrates this mathematically with chalk on a blackboard to a group of fellowparolers who have broken into the store. All of which is soundly educational, but doesn’t make for what is known in the trade as socko entertainment.

Parole violation is the theme of “You

and Me.” Parolers, it seems, mustn't marry. But Sylvia Sidney and George Raft do, and get into terrible trouble. In the end, with the slate washed clean, they get married all over, with their baby attending the ceremony . . . Well, we told you it was an odd picture.

THE “Dead End” boys—the whole tough, dirty, disreputable, talented set of them—get into reformatory school in their latest film. It’s a junior penitentiary of the bad old kind, with a grafting, brutal warden (Cy Kendal), atrocious food, and a cat-o’-nine-tails for the boys who won’t behave. Then Humphrey Bogart, the new deputy commissioner, comes in, fires the warden, and goes through the whole place like Snow White, cleaning up the mess and making everything comfortable and livable. One of the boys (Leo Garcey) I is the “Grumpy” of the piece; won’t succumb to the new warden, won’t co-operate, and finally gets everyone including himself into plenty of trouble.

“Crime School,” however, is no fairy tale. It’s a tough and realistic study of budding criminals. Apart from a rather perfunctory romance between Humphrey Bogart and Gale Page, it is also an absorbing and believable story. Not everyone will like this picture, but everybody except the very young should see it.

"L_TAROLD LLOYD, spry and shy as ever, is back after two years, this time as a befuddled archaeologist whose problem is to get from Los Angeles to New York in time to catch an expedition to Egypt. Pursued by motorcycle cops and mobs of citizens, he travels crosscountry on freight trains, cattle cars, firefighting apparatus and practically everything else on wheels, and lands finally in the New York Harbor, weighted down by a precious stone table whose hieroglyphics read “April Fool.”

Harold Lloyd is a wise enough comedian to know that a chase sequence plus the reliable sap-makes-good formula, is as good today as when he was a boy; also that losing one’s pants, however old as a predicament, is eternally fresh as a gag. Phyllis Welch, Lionel Stander and Raymond Walbum are among the people involved in Mr. Lloyd’s flight. This is as wild and funny a picture as Harold Lloyd has ever made. Our guess is that he will need another two years to recover from his bruises and get his breath back. Fine familv entertainment.

The Rage of Paris.—The newcomer, Danielle Darrieux, with Douglas Fairbanks, Jr., in an engaging and quite innocent bedroom farce. For grown-ups.

The Toy Wife.—Louisiana and the spoiled Southern belle once more. With Luise Rainer. Bette Davis in “Jezebel” stole this picture without setting foot on the lot.

Holiday.—Ann Harding's original film success, this time with Katharine Hepburn as the heroine who thought money wasn’t any fun. A Hepburn triumph. 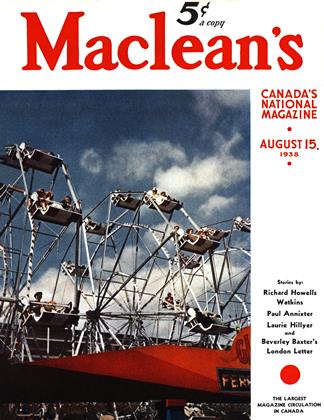