WITH Metro - Goldwyn - Mayer’s “Marie Antoinette” opening up all over the country in the early autumn, the new movie season will get the fine big start it so badly needs.

Just such an impressive wonder show was required, at the opening of the season, to get the public excited about the movies once more. It is no secret that for months the movie public has shown an alarming tendency to sit quietly at home and put its nickels and dimes in the china pig on the mantelpiece. There has been a great deal of unhappy wrangling over this situation, with the exhibitors blaming the stars, the distributors blaming the exhibitors, the producers blaming the stories and everybody blaming the recession.

As everybody, including the heads of the industry, knows, recessions have a tendency to drive people into the movies, if necessary on their relief money, as a temjx)rary refuge from their own private depression. So the slackening in attendance over several months of hard times seemed to indicate that the public was even more bored with the movies than with the recession. Exceptional films such as “Snow

White and the Seven Dwarfs,” “In Old Chicago,” “Test Pilot,” and “The Adventures of Robin Hood” pulled out the old enthusiastic crowds. But when they were offered routine entertainment with minor variations in plot, they settled down quietly at home in a state of passive resistance. The “dizzy” cycle had gone down to its last dying spin. The “problem” cycle-wife vs. secretary, marriage vs. career, woman vs. woman, riches vs. love and love vs. everything—couldn’t stir the public out of its apathy. Even the double bill had lost much of its power to attract— with good reason since, as Producer Sam Goldwyn himself pointed out, “It used to be that you expected one picture on a double feature to be bad. Now you got to expect both of them will be terrible.”

This was the situation the screen industry had to meet. And after considerable head-shaking and heart-searching they decided that the only way to meet it was by turning out better films; finer and shorter program pictures, larger, livelier and more spectacular features. This is why the prospects for 1938-39 are looking much brighter than they have in many seasons.

The industry this year has decided to take care of everybody. There is, for

instance, that stubborn section of the public that has always said it would just as soon stay home with a good book. So Hollywood is going to give them good books in screen form: “Kenneth Roberts’ “North West Passage;” William Faulkner’s “The Unvanquished;” John Galsworthy’s “Forsyte Saga;” Jane Austen's “Pride and Prejudice;” Marjorie Kinnan Rawlings’ “The Yearling;” Enid Bagnold's “National Velvet;” James Hilton's “Goodbye, Mr. Chips.” And just to prove that it can turn solid reading into solid entertainment, it is going in extensively for biography. This is a field that so far has scarcely been scratched. But the success of “Victoria the Great,” “The Life of Emile Zola,” and “The Life of Louis Pasteur,” makes it clear that it is a field well worth cultivating. So this year we will have screen biographies ranging in period from the legendary King Arthur to the late Clarence Darrow. The list includes

Then there is history. Historical pictures have always done well at the box office, partly because they involve so much activity and spectacle, and partly because they supply us with a gratifying sense of having caught up on some arrears of education. The historical films scheduled for 1938-39 promise a fine blend of entertainment and improvement; “Suez,” the drama of the building of the Suez Canal ; “Stanley and Livingstone,” built about exploration in Africa; “The Texans,” a tale of carpet-bagging days; “Quo Vadis;” “Union Pacific,” dramatizing the building of American railroads; and a group of films describing the industrial developments in America—“Hudson’s Bay Company;’’ “Men with Wings;” “Big Steel’’ and “Western Union.”

IT ALL reads as though the public were going to get in some sound post-graduate work during the coming season. However, it isn’t going to be all work and no play by any means. The industry, busy counting noses, hasn’t overlooked the lighter-minded group of movie-goers in preparing its big box-office party. The Marx Brothers will be active once more, this time in “A Day at the Circus;” Edgar Bergen and Charlie McCarthy will present their credentials in “A Letter of Introduction;” Walt Disney will give us another feature-length fairy show, “Pinocchio;” and “Pinocchio” will be followed by “Bambi,” the story of a deer, with an allanimal cast. Fred Astaire and Ginger Rogers will dance again in “Carefree;” Sonja Henie will skate for us in “My Lucky Star;” Deanna Durbin will sing, and fall in love for the first time (with Jackie Cooper), in “That Certain Age;” the Dionnes will be presented in “Five of a Kind;” and the Ritz Brothers in all their beautiful wildness will appear in a Damon Runyon invention, “Straight, Place and Show.”

No year would be complete, of course, without a big “catastrophe” film. The researchers are already at work on the “Titanic” disaster, and Alfred Hitchcock, the greatest of the English directors, has been imported from England by SelznickInternational to handle the story.

Altogether it looks from the advance sheets as though the industry had made up its mind that everybody, to the last diehard, must be persuaded into the movies during the coming season. If the box office doesn’t revive and flourish under all this stimulus, it won’t be the fault of the boys in Hollywood. 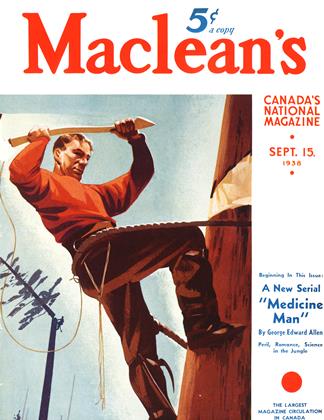