WITHIN a few days, or weeks, Parliament will be in session. As always, when Parliament is about to meet, there are predictions, anticipations, hopes. We are told that Parliament will—or should—do this, that, or the other thing. For a few days or weeks there is great bustle, excitement. Later on, as Parliament shows it will do none of these things, there is a “letdown,” disillusionment. Comes then resentment, bitter criticism. Men in clubs and in Pullman smokers, on farms and in factories, sneer at the “talking shop.” Others say that what this country needs is “a businessman to run it.” Fascists and Communists point to the “breakdown of democracy.” All of which is wrong. The wrong indictment.

Yet there is much that is wrong with Parliament; radically wrong. So wrong that it should be worth while trying to find out what the wrong is.

To begin properly, let it be set down first of all that the wrong isn’t dishonesty. About the so-called “corruption” of public life there is talked and written an appalling lot of falsity. The writer of these notes has been watching Parliament, and from a ringside seat, for a quarter of a century. He has seen it from the inside and the outside; seen it in all its moods and tenses; seen it at its worst and at its best.

What, then, is wrong? Where, and in what specific respects, does Parliament, and the average member of Parliament, fail to measure up?

Answering, or attempting to answer, it is necessary, first of all. to clear our minds about just what Parliament is. About its functions. Its limitations.

Parliament Does Not Govern

PARLIAMENT is not, as so many seem to think, the author of government policies. Practically, it has little or nothing to do with government policies. People complain: Why doesn’t Parliament do something? Actually there is nothing that Parliament can do; nothing, in actual practice, except support or reject, or examine and criticize, the policies of the Cabinet. Of the Executive. The Cabinet, and the Cabinet alone, devises policies. It, and it alone, must find solutions for the unemployment problem, for the railway problem, for other problems. Only the Cabinet can deal with the tariff, with national defense, with shipping, with immigration. The Cabinet, the Government, brings down the budget, decides upon the character of taxation; determines whether taxes shall be low or high. It determines expenditure; frames appropriations; fixes a budget for the year.

Summed up, what it all amounts to is this: That while we talk about Parliament “being supreme,” Parliament, except in constitutional theory, or in a narrow technical sense, is not in practice supreme at all. Mostly, and for all practical purposes. Parliament, operating under our party system, merely registers the will of the Government. The Government—the Cabinet—governs.

That being true, what, then, can the public expect from Parliament? Or what might it expect of it?

What the public has a right to expect—or what it might expect if it thought more or took more trouble about the matter is this: that Parliament, by its alertness, by the ability of its members, by their understanding and appreciation of Parliament’s real functions, should act as a check upon the Government. Upon the Executive. That it should stand between the public and the Cabinet precisely as representatives of shareholders stand between the

That is what a Cabinet is the board of directors of the Corporation of the Dominion of Canada. Members of Parliament are the representatives of the rest of us the shareholders. In that capacity, they can’t make policies; can't authorize expenditures or imix>se levies or taxes. They can examine, and scrutinize and check the policies and levies and expenditures of the Cabinet. They can audit statements and contracts; see that they are fair and businesslike. See that taxes the money put up by the rest of us —are diverted through proper channels. So far as a Parliamentary Opposition is concerned, that, absolutely, is what its business is about.

What does this imply?

It implies, first and foremost, that members of Parliament must be equipped for their jobs. That they should know what Parliament is about. What government and government business is about.

Most members of Parliament don't know. And understandably. Pitch forked into Parliament without training, often without as much as elementary knowledge of the background of government, or of its varied and ever widening and increasingly complex problems, how should they know? Yet we expect democracy to function efficiently; to become government-wise and businesslike!

We are not getting this. Under our system of selecting candidates for Parliament, we arc not likely to get it.

WHAT IS the system? Mainly it is the practice, becoming more firmly established with the years, of local candidates—of each and every constituency in the land having to be represented in Parliament by a “native son.” this without regard to training, experience, or any other qualification whatsoever. More than anything else, that system is bringing about a deterioration of Parliament; lowering the average of its ability; making it sectional in outlook: increasing its inefficiency.

In England, where the Parliamentary system is seen at its best, where democracy can still more than compete with dictatorship, they don’t go in for the local candidate. Over there they understand that government is a difficult business, that politics and public life are a science; train

public men accordingly. Their brightest minds are brought to Parliament, made to serve an apprenticeship; take up public life as a career. That is why Westminster remains the greatest deliberative assembly in the world.

In Canada, few think of politics as a career. It is a hit-and-miss job; an accidental circumstance. Indeed, it has become one of our most beloved habits to sneer at the “professional politician.” to make the term one of reproach.

It is not the professional politician we have to fear. It is the amateur ix)litician. The amateur who, selected from some riding because of his real or imagined capacity to command votes in that riding, comes to Parliament without the faintest knowledge of what Parliament is about, to flounder in confusion. For whole sessions on end this type of member, a victim of a foolish system, is just deadwood. useless. By the time he has begun to learn what Parliament’s functions are. and therefore to become useful, he is turned out replaced by another amateur. The rest of us, sitting Nick home, criticize Parliament.

The amateur jxilitician. in the old days, was jx'ihaps got*I enough. He is not gixxl enough tixlay. Government, up to a generation ago, was comparatively simple. It collected revenue from |X‘rhaps one or two sources; built public works with it; kept the peace. Government is simple no longer. Vast social upheavals and economic sweeps have made its activities as wide as humanity. It reaches its hand out into all private efforts; has had its sco|X' and responsibilities widened to an almost appalling degree. To argue, in the light of that, that government can lx.carried on by amateurs, by men untrained in government, is to argue against the safety of democracy.

Yet. extraordinary as it may seem, the average member of Parliament of a generation ago was, in this writer's judgment, more comjxdent for his task than is the average mernlxT of Parliament today. Twenty-five or thirty years ago there were at least one or two dozen men in the House of Commons who stixxl out from the crowd. They wrere capable of scrutinizing Government accounts and contracts and policies. They called for and combed through the Auditor General’s rejxirt. They summoned the Public Accounts Committee and scrutinized Government business. They subjected the Government’s estimates to the sternest tests. One thinks of the Frank Carvells. the Arthur Meighens, the E. M. Macdonalds, the A. K. MacLeans, the I lugh Guthries, the O. S. Crockets; of a score of others. No Government, faced with the sharp eyes and tongues of members of Parliament of the calibre of such men, would lightly take chances on half-baked legislation or with doubtful public accounts.

In Parliament today these men have no counterparts. Indeed, over a [X'riixl of nearly two decades the Public Accounts Committee has been called but rarely; in some sessions not called at all. Instead of addressing themselves now to the public accounts and the Auditor General’s report, members content themselves with preaching economic theories and philosophies; use Parliament as a sounding board for political propaganda.

Chief sinners in this practice have been the so-called radical groups. Ixmg on talk about economic and monetary theories, they are woefully short on acting as a check and audit of the Cabinet's accounts and ixilicies, in the consideration of estimates. Actually, they misunderstand the true function of Parliament: the function of being an organ of criticism; of check upon the Executive.

Hence such an episode as the Bren gun contract. With whether that contract was a gixxl one or bad, we need not be concerned. The real point is that it went through Continued on page 21

Parliament practically without challenge; without examination; without anybody being either willing or competent to ask the questions about it that ought to have been asked. The questions that ought to bí' asked respecting any Government contract or pxilicy involving millions of dollars.

And as with the Bren gun, so with other things. Every session now. Parliament votes at least a half a billion dollars. That is why taxes are high. Yet we, the public, complaining about Parliament and democracy. entrust the examination of this half-a-billion-dollar expenditure — estimates and other measures to men we have pitchforked into Parliament without training for their jobs.

/'"'VNE EVIL breeds another. The evil of sectional representation in the shapx1 of “local” candidates helps to entrench the sectional idea in the compxisition of Cabinets. The leader of a Canadian pxditical piartv, returned to office and finding himself called upx>n to select a Cabinet, is hamstrung from the first. Not only must he pick and choose from the material available to him among the elected candidates of his party; he must pick and choose among that material on the basis of representation of every section, province, race and religious creed in the country. This last may be necessary— necessary to national unity—but it militates against efficient government. When, in addition, the character of representatives from some or all of the sections

that must be taken care of is not too high, the pxisition becomes all the worse. A strong Government is almost impossible.

That, in these days, when democracy is challenged, when its lights, all over the earth, are being turned down, is not good enough. Democracy is not given a chance. We are not using its best instruments, its best équipement. We are practicing it in a haphazard, hit-and-miss fashion; putting weapons into the hands of all who despise democracy, who would destroy it.

Those weapons, unless we realize what democracy means, or try to rediscover it, will some day be used successfully. Which will he a tragedy. “Of all sad things on earth,” said a famous American jurist recently, “the saddest is the epitaph of a vanished liberty.” 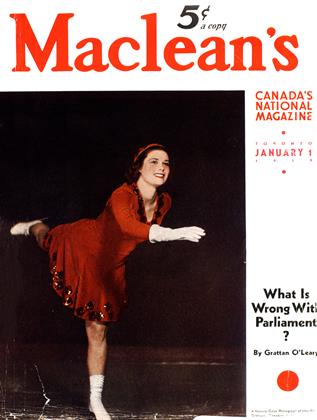