I HAVE nothing whatever against good plain cooks or good plain cooking. Quite the contrary in fact, for in my opinion a well-made, perfectly seasoned dish is worth any number of fussy get-ups. But when it comes to prosaic, monotonous meals which lack that final flair of flavor, it’s another matter altogether.

If there’s any excuse for them, I don’t know it. Not economy, to be sure, when condiments cost so very little and can be made to serve many a thrifty purpose. Nor lack of the wherewithal to pep things up appropriately, for isn’t there a list as long as your arm, beginning with simple hêrbs and ending with intricate blends of half a dozen zestful ingredients?

In preparing even the most unpretentious dishes, the application of both science and art is required for best results. It won’t do to know all the rules and let the rest go hang when the serious business of developing flavors and savors is definitely up to you.

When a recipe tells you to “season to taste,” it means just that. And it takes for granted that you’ll do it skilfully—a dash of this, a touch of that, as you go—until you reach what you consider perfection. Don’t be afraid to experiment a little, not in too adventurous a spirit, but not with such extreme caution that you never get anywhere. Lead up discreetly to your harmonious goal, so as not to fall short or overreach it; then you won’t go far wrong.

Now a stew is a stew, whatever you call it, but it has as many variations as it has names in different languages. All of them are delicious provided the cook has a nice sense of value and a fine discriminating taste; all of them are awful if she hasn’t. Even from the same beginning one woman will serve a dish far superior to that concocted by her less imaginative sister. While one is flat and dull, the other is fit for the gods, made so by the clever choice and correct propoGion of such accessory ingredients as salt and pepper, herbs and

A soup is no better than its seasoning makes it. Similarly, a few well-selected additions will do wonders for a sauce, changing its blandness into something zestful, which in turn transforms the dish it accompanies. Gravies are enriched by prepared gravy powders designed to help them along, or by various meat extracts which add color, flavor and relish. Meat pies, loaves and patties take kindly to a little reinforcement of their flavor when onions, catsup, chopped parsley, green peppers and other savory accessories come to their aid. So do those creamed, scalloped, and casserole dishes which provide such appetizing means of using leftovers— fish, meat, vegetables, and what have you.

Add a pinch of mustard to a cheese soufflé and see what it does for it; try a few drops of tangy sauce for the improvement of your tomato cocktail, or a hint of garlic when the salad bowl needs a little enlivening. And speaking of salad reminds me; where would it be without the vinegar in its dressing? What would your poultry stuffing amount to minus its sage and savoring, and how would any savory dish at all get along without salt in its make-up?

It all goes to show that good cooking, plain or otherwise, is an art as well as a scientific accomplishment. But any woman who has an appreciation of fine flavors and uses the materials at hand to achieve them, can produce an array of economical appetizing dishes seasoned to a king’s taste.

Slice the onions and cook in the fat until clear but not browned. Dissolve the meat extract in the boiling water, add the seasonings, pour over the onions and simmer until tender. Add the milk, and when heated pour over rounds of toast in a baking dish or individual casseroles. Sprinkle with cheese and set in the oven until the cheese is melted and crusty. Serve at once.

Salt, pepper and allspice— to taste

6 Strips of bacon, fried and diced

Put the first seven ingredients into a buttered baking dish, arranging in alternate layers. Dissolve the meat extract in the water and pour over the first mixture. Bake in a moderate oven—350 deg. Fahr. —for 114 hours, or until the jxitatoes are soft. Serves six or eight.

Put the tomato juice, onion, bay leaf and seasonings in a saucepan and heat to boiling. Melt the butter, blend in the flour and add the hot strained tomato juice. Cook, stirring constantly until thickened. Remove from the heat, add the parsley and Worcestershire sauce to taste. This is good with meat balls, loaves, or croquettes, with ramekins of fish or fish cakes, with vegetable croquettes and many casserole dishes.

Combine the mustard, a few drops of condiment sauce and the water. Add the melted butter and serve.

Cook the rice in rapidly boiling salted water, drain and pack lightly into heated custard cups. »Turn out, and while still hot ixjur over the rice molds a cheese sauce made as follows: Melt the butter in a

saucepan, add the flour, mustard, curry powder, salt and pepper, and stir until smooth and well blended. Stir in the milk and cook, stirring constantly until thick, then add the cheese, stir until melted and I serve at once. Serves four. This is a good j accompaniment to cold meat in a supper j menu.

Beat the cream until stiff. Combine the horse-radish, vinegar and salt, and fold into the whipped cream.

Soup stock or water to moisten

Wipe the squash and cut in half crosswise. Remove the seeds and stringy portion, then place a little butter in the hollowed halves and sprinkle with salt and pepper. Cover and bake in a hot oven— 400 deg. Fahr.—thirty to forty-five minutes, or until the squash is tender. Fill with a stuffing made from the remaining ingredients blended together. Return to the oven for ten to fifteen minutes, and serve hot.

2 Pounds of round steak, ground

Y¿ to ?4 Cupful of tomato catsup

Combine all the above ingredients, with the exception of the catsup, and pack into a greased loaf pan. Cover the top of the loaf with tomato catsup and bake for about forty-live minutes in a fairly hot oven— j 400 degrees Fahr. Serve hot or cold. Use uncooked or left-over cooked meat. Makes j approximately eight servings.

Cut the ham and veal in cubes, roll in flour and brown in the fat in a frying pan. Remove the meat from the pan, and in place put the onions, pimiento, tomatoes, parsley and seasonings. Cook for five minutes, but do not brown. Add the meat

and turn into a casserole dish, cover with the bread crumbs or cereal and bake at 400 deg. Fahr, for thirty minutes. Five servings.

About 2 Pounds of round steak (1 inch thick)

Wipe the steak and into it pound as much flour as it will hold. Fry the bacon or pork and brown the steak on both sides in the fat. Sprinkle with the salt and pepper, and over the meat pour the hot water which has been mixed with the mustard and condiment sauce. Add the onion, peeled and thinly sliced, cover the pan fightly and cook in a moderate oven—350 cleg. Fahr.—until the steak is tender (about 1 Yi hours).

Whip the cream until stiff, add the salt, pepper and cayenne, and gradually add the vinegar. Peel the cucumber, chop very fine and drain. Add to the seasoned cream mixture and serve with chilled salmon. 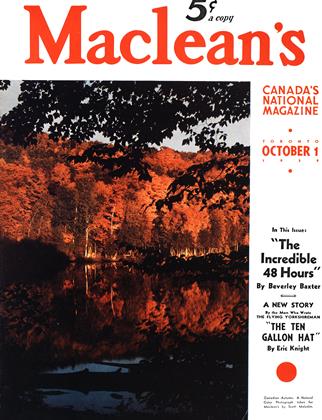