There's Something in a Name MARY AGNES PEASE October 15 1939

Part 9: The Province of Saskatchewan

THE Province of Saskatchewan lies snug in the heart of the Dominion, and bears the name given by the Cree Indians to a river which was their main highway, and near which they reared their tepees. They called this body of water Kisiskalchewan, which means a rushing river or swift current. This name (now somewhat reduced to Saskatchewan) was eventually applied to the province.

Saskatchewan is only thirty-four years old. Prior to 1905, the records of the country were, in the main, those of the Northwest Territories from which the province was carved.

The broad fertile lands of Saskatchewan invited settlement. In a brief span of ten years — 1911 - 1921 — the population in Saskatchewan increased 439 per cent in one of the greatest rushes for farm lands in the history of the world.

When the Indians were the undisputed dwellers of Saskatchewan, the buffalo roamed over the prairie and fattened on the luscious grass. But when the furtraders came, these grand, shaggy creatures were destroyed by thousands, until few were left in the territory. It has been estimated that for a number of years 250.000 of them were killed annually to provide sport for hunters and also to obtain skins. The bodies of the animals were piled high on the prairie, and many of them were buried in the lakes. Regina, the capital of the province, once bore the

name “Pile o’ Bones,” which is a translation of the Sioux word Wascana. Even today, buffalo bones are uprooted in the prairie by the plow of the farmer.

There are two royal names in Saskatchewan—Regina and Prince Albert, which commemorate Queen Victoria and her royal consort. There is also a little town called Glamis. named in honor of Glamis Castle, the old home in Scotland of Her Majesty Queen Elizabeth. It is hardly necessary to record the fact that this town is peopled mainly by those of Scottish birth or descent.

Visitors to the West find the name “Moose Jaw” an intriguing one. This is a translation of an Indian name given when Saskatchewan was very young, and is supposed to mean “the place where the white man mended a cartwheel with the jaw of a moose.” The name “Lloydminster” brings to mind the undertaking known as the “Barr Colony” in Saskatchewan in 1903. The Rev. Mr. G. E. Lloyd, after whom Lloydminster was named, was associated with the Rev. I. M. Barr in bringing some 2,000 people from the British Isles to take up land in this western province. The majority of the settlers had never before been beyond the confines of London or Manchester. Although some of the members of this expedition returned to their native land, many remained, and their sons and daughters are now prosperous citizens of the West. 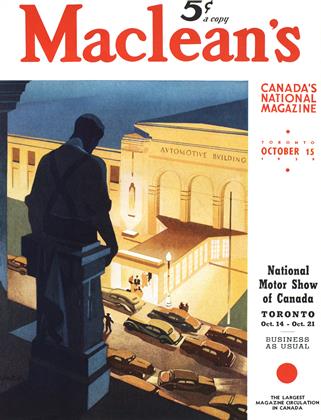