THE HIGHER cost of living may not be altogether an ill wind. It gets us back to thrifty habits, which is a good thing—fine for the soul and often quite beneficial to the menu.

Those people who merely make the rounds of roasts, steaks, chops and expensive meats must find it all very nice but a bit boring at times. Think what they miss —the savory goodness of a stew, a beef loaf, a pot roast, a steak-and-kidney pie, or those delicious combinations of meat, vegetables and gravy which come from the casserole.

For the sake of variety as well as economy, try the cheaj>er cuts. Their inexpensiveness doe« not come from lack of flavor or nourishment, for they match the high-falutin’ portions on both counts. It’s merely a matter of less tenderness, and any smart cook can overcome this slight disadvantage thoroughly and easily. The secret is long slow cooking by moist heat which softens the connective tissue and develops the naturally fine, rich flavor. It takes more time, but not necessarily more effort or any particular skill to prepare them.

One thing you do need, however, is judgment and imagination in their seasoning. A poorly flavored stew is nothing to boast about, while a well-made one with basic and accessory ingredients cleverly blended is a favorite dish all over the world. You meet it everywhere, under different names and in 101 variations— goulash in Hungary, chili con carne in the South, curry in India and pal au feu in France. All of them are distinctive, but none is better than a Canadian version prepared with loving care and glorified by dumplings.

Similarly, other economical meat dishes require good cooking and the discriminating touch. A pot roast may be merely passable or a real culinary triumph, a hamburger loaf merely filling or of a lipsmacking goodness, a flank steak uninteresting or a bit of a specialty, depending on the way you prepare the meat and the company you have it keep.

Housekeepers who ordinarily pass up the more unusual meats such as kidney, heart and liver, will do well to consider them now. Not only are there excellent dietetic reasons for including them, but they fit into the comparatively modest budget and offer many possibilities for variety and interest. “Have a heart” if your menus are in danger of getting a bit monotonous; it’s economical, contains vitamins and minerals for the good of your health and is a tasty dish when stuffed and baked or cubed, rolled in flour and cooked in a casserole with vegetables and seasonings. Or serve liver for its iron and its really good flavor, alone or in combination with other ingredients. Kidneys may be curried and served on toast, broiled for breakfast, used in a meat pie to complement and enrich it.

Try tongue in tomato jelly, or hot with a mustard sauce and vegetable accompaniments. Try tripe, fresh or pickled, for an economical and quite appetizing dish. It’s better to eat it than talk it and. like conversation, it should be well seasoned to prevent dullness.

So you see, your thrifty program may be all to the good. It can bring you new gastronomic adventures and delights as well as the satisfaction of being a good manager of your finances and of keeping your family fit at a time when fitness is of major importance.

1 Pound of veal shoulder or shank

Cut the veal and the smoked shoulder or ham into cubes (about one inch), add salt and pepper to taste and brown in the hot fat. Add the sliced onions and diced carrots and cook for a few minutes. Add the flour and stir until blended, then gradually add the boiling water to which the catsup has been added. Simmer the mixture for about a half hour or until the meat is tender, add the diced potatoes and cook until done. Turn the mixture into a deep casserole or meat pie dish and top with biscuit dough, patted to about one-half-inch thickness. Bake in a hot oven—450 deg.

Wipe the steak with a damp cloth and sprinkle with salt and pepper. Combine tlie bread crumbs, chopped onions and seasonings, add the slightly beaten egg, the melted fat and enough hot water to make of the desired consistency. Spread this dressing on the flank steak, roll up and tie or fasten with skewers. Dredge with seasoned flour and brown on all sides in hot fat. Place in a casserole or other covered baking dish, add one-half cupful of hot water, cover and cook until tender (about one and one-half hours) in a hot oven— 400 deg. Fahr. Remove strings or skewers and serve on a hot platter garnished with glazed prunes (see recipe) and accompanied

Fahr,—until the crust is nicely browned (about ten to twelve minutes).

by gravy, made by thickening the liquid in the baking pan. Approximately six servings.

2 Tablespoonfuls of butter or dripping

1 )4 Cupfuls of liquid in which

Wipe the meat with a damp cloth and tie into shape (strips of cloth are better than string for this). Place in a deep kettle, add boiling water to cover and a few herbs for seasoning. Simmer until the meat is tender (approximately three hours), adding salt when half cooked. Remove the meat to a baking pan, take off the strips of cloth and brown the meat in a hot oven. Melt the fat, addthe chopped onions and cook until lightly browned. Stir in the flour and gradually add the liquid, cooking and stirring until the mixture is thickened. Add the chopped parsley and pour over the hot meat. Serve at once. Approximately six servings.

Soak large prunes overnight, drain and arrange in a baking dish. Cover with a syrup made by cooking together for five minutes one cupful of water, one-half cupful of sugar and the juice of one lemon. Bake in a hot oven—400 deg. Fahr.—for about three-quarters of an hour, basting frequently with the syrup. This amount of syrup is enough for about one pound of prunes.

Wipe the steak with a damp cloth and coat with a paste made by blending the mustard and vinegar. Place the steak in a baking dish and cover with thinly sliced onions. Add hot water to cover the bottom of the dish, put a lid on the dish and bake in a moderate oven—350 deg. Fahr.— until tender (about one and one-half hours).

(bacon or ham fat is good) Stock to moisten

Wipe the meat, rub with salt and pepper and place in a kettle with enough water to cover. Simmer until the meat is tender. Remove the bones, place the meat in a roasting pan and spread with dressing made by combining the bread crumbs with the seasonings and melted fat and adding liquid in which the meat was cooked to make a fairly moist mixture. Bake in a moderately hot oven—375 deg. Fahr.— until the dressing is nicely browned.

1 Cupful of stock or milk

Peel the onion, remove the seeds and stem from the pepper and strip the parsley from its stalks. Put these prepared vegetables with the stewing lamb through the food chopper. Beat the egg, add the Continued on page 54

Continued from page 52 liquid, the bread crumbs and seasonings and allow to stand for ten minutes. Combine with the meat mixture and turn into a well-greased loaf pan. Bake in a moderately hot oven for one hour, turn out on a hot platter and serve with seasoned white sauce to which one-half cupful of left-over peas may be added if desired.

3 to 4 Tablespoonfuls of fat

Wipe the meat and pound the flour into it. Dredge both sides with salt and pepper and sprinkle with the celery seed, sage and curry powder. Roll up and secure with toothpicks or skewers. Melt the fat in a kettle açd brown the meat on all sides in the hot fat. Peel and slice the onion and spread over the meat, peel the potatoes and arrange around the meat. Add the tomatoes and water, cover with a tight lid and simmer until the meat is tender and (he vegetables cooked. For serving, place the meat in the centre of a hot platter, arrange the potatoes around the sides and pour the tomato gravy over the top. Six servings.

Cut the meat in cubes, dredge with the flour and brown on all sides in the hot fat.

Remove the meat from the fat. and add the chopped onion, pimiento and parsley. Cook slightly, add the tomatoes and seasonings and cook slowly for five minutes. Add the meat and turn the mixture into a greased casserole. Cover with the crushed cereal or with buttered bread crumbs and bake in a moderately hot oven—400 deg. Fahr.—for about one-half hour, or until the meat is tender and the topping nicely browned. Five to six servings.

3 to 4 Tablespoonfuls of fat

Wash and trim the heart and soak for one hour in salted water (one teaspoonful of salt to one quart of water). Drain, cover with boiling water and simmer for one-half hour. Cut in slices and dredge with the flour or bread crumbs which have been seasoned with salt and pepper. Fry slowly in hot fat, turning to brown on both sides and cooking for about fifteen minutes. Serve hot, garnished with sprigs of parsley.

Soak the liver for five minutes in lightly salted water. Drain and wipe dry. Combine the flour, salt and pepper and coat the slices of liver with the mixture. Mix the cracker crumbs with the butter and arrange one half of them in a greased baking dish. Cover with the prepared liver slices, arrange the onion slices over this and add the remainder of the buttered crumbs. Add the water and place the bacon on the top. Cover and bake in a moderate oven— 350 deg. Fahr.—for fifteen minutes, remove the cover from the dish and continue cooking for ten minutes longer, or until the bacon is crisp. 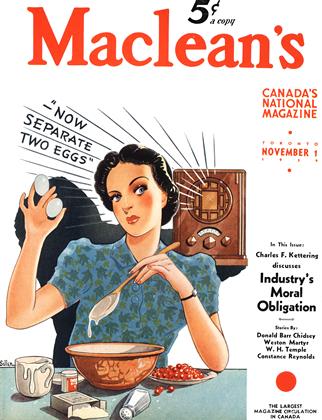