WE USED to call it Stink Lake in the early years, because of the bad odor that came from it along in the fall when the water was low. It smelled like old eggs and kelp and rotting seaweed.

We used to take a shovel on Sunday afternoons and bring back a bag of the gleaming crystals to throw over the pasture fence. Because it was salty, the stock liked to lick around where it lay; it seemed to do them good too, like a tonic, and kept their coats sleek and shining.

How were we to know that we had a fortune at the back door? That some day a large industry would grow up around the white fiats gleaming so beautifully in the sun, that thousands of good round dollars would be dredged up and piled in shining crystals and taken all over Canada to smelters and paper mills and nickel refineries. Some of it would be colored rose and jade and lavender and sold in bright bottles with a satin ribbon around the neck, as bath salts.

Twenty miles west of Briercrest it lies, just where the old Pole trail used to zigzag across the lonely hills, skirting the white shore of the lake to the east, making a beeline for Wood Mountain.

Old ranchers used to stop and let their tired Indian ponies rest and lick the white sand. One old fellow told me that in the spring great herds of buffalo took a day off and refreshed their souls along the ragged edges of the salt flats. Then they would pass on to Old Wives Lake and drink the clear water there, purging their great bodies of the winter’s hard fare and quickening their sluggish veins of all uncleanness.

No living thing lives there. Even the birds shun the bitter breath, building their nests far from it; wild ducks passing over never light upon its gleaming breast; geese honk high in the blue air and go a few miles farther north to Buffalo Lake, making a jog around the city to avoid the guns of men.

The hills around it lie barren and lonely. The short prairie grass is bleached to a golden tow, pale and lifeless like oakum, but it isn’t, for prairie wool is sun-cured ; all its life-giving qualities are held within like pemmican. It is better than any tame hay I have ever known, and stock will winter on it and come out in the spring rolling fat and tough as whalebone.

The sodium sulphate lakes of Saskatchewan are among the natural wonders of the world. Only in this province is the chemical found in its natural state. The plants here have a capacity of six hundred tons a day, and production methods are continually being improved. The bentonite clay from which it comes, known to you and me as a plain “gumbo,” is a pain in the neck after a good rain. It sticks closer than a brother.

The water on the prairie is highly mineralized, filled with alkali or sodium sulphate. Straining into the sloughs and small lakes, it evaporates in the hot sun, leaving the minerals crystallized and white as snow, varying in depths from an inch to several feet. At Ormiston, just south of us, it reaches a depth of twenty-four feet in places. It has an indescribable beauty.

Glauber’s salt is hydrated sodium. It has been known to men as a family medicine since the dawn of time and was once thought to perform miracles. It is now used in the manufacture of kraft paper and in the Orford process of separating nickel from copper. It is also used in dye-making, in manufacturing glass and in tanning. Until a few years ago sodium sulphate was a by-product of nitric acid, also of soda ash by the La Blanc process, and the supply was sufficient for the demand. Now, however, these crystals are sent East from the Saskatchewan lakes by

the carload. The supply is almost inexhaustible.

A Town is Built

A LITTLE new town has grown up on the eastern border of the lake. It bears the name of Bishopric in honor of the man who pioneered the work. All the houses are stucco, built to a pattern, neat as bandboxes. The little lawns are like green pocket handkerchiefs; caragana hedges have been planted and small saplings wave gently in the wind. Water was found in the hills and piped in.

The whole village is electrified and shines out across the lonely prairie like a cluster of stars on a dark night.

There is also a gasoline refinery in connection with the plant at Bishopric. Gasoline is distributed from here to farmers in the south country in huge oil tanks.

War has greatly stimulated the sodium production, and extra men are being added day by day. Great trenches are cut across the lakes to form reservoirs for the crystals. These trenches are about fifteen feet wide and thousands of feet long. From the shore they look like huge cracks in rotten ice. When they are filled, they are dug out with electric shovels. The crystals are taken to the plant in box cars, washed and crushed and put into the drum driers which remove all the excess moisture. The sodium is then screened and cooled and ready for shipping.

Even in times of peace cameras were not allowed except around the yards, as the process of refining is carefully guarded.

And so the little town stands white and clean beside the glistening shore of old Stink Lake. Behind it the lonely hills lie golden in the warm sunshine, the short grass, like tow, waving in the wind. A few cattle rustle their living in the low . places that stay green until the snow flies; dust rises from the highway: box cars, white with alkali, stand waiting to be loaded; a little boy—not old enough for school—pushes his red wagon along the sloping street, chugging to himself like an engine; white clothes flap in the hot sunlight; women call to each other from door to door.

The old man who homesteaded here is gone and forgotten. He never got very far anyway. The land was too sandy and light; rain ran off his high fields into the little hollows. Only the cows lived and gave bountifully, but he hated cattle and so he got out, broke, and left the shining lake that they didn’t think enough of to name decently. He left it for someone who saw its wealth, who knew that God in His wisdom never made anything useless.

Now the clouds of war have given it a new importance. We need nickel for armaments, and nickel is refined and made durable with sodium sulphate. The plant runs day and night. If you wake in the still darkness you can hear the engines, like a pulse beating across the lonely miles, vibrating against you like something alive and breathing, something you feel rather than hear, like the sea beating in a seashell against your ear. The acid from it savors your breath, stings your throat into a tingling dryness and your eyes smart like coals of fire.

And the old Stink Lake we knew, with its smell of rotting seaweed and kelp drying, has gone high hat on us. Now we treat it respectfully, like a poor relation who won a sweepstake and came home to lord it over the people who once snubbed him. From the hills you can see the lake as of old. white as alabaster, turning to palest rose as the sun goes down behind the low hills to the west, leaving the purple twilight to give it an ethereal beauty that makes it not of earth. 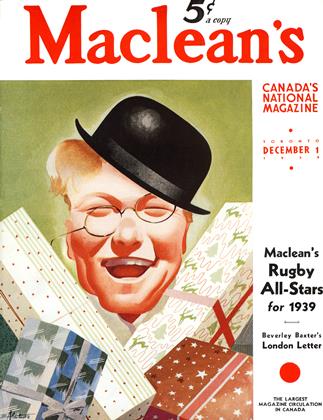