EVEN IN the face of stiff competition from plum pudding and other delectable desserts, pies and pastries still hold their own in holiday feasting. To lots of folks it wouldn’t be Christmas without them, partly because of cherished family tradition and partly because the crispness of this merry-making season gives us an appetite for good hearty food.

So all through December, rolling pins are rolling out all kinds of pies—those that v mother used to make and others she never heard of, but would have liked if she had.

There’s mince, for instance, in its nice old-fashioned form, a fragrant mixture of fruit and spice between two flaky crusts. And mince gone modern, with jellied filling in a pastry shell, uncovered and proud of its rich dark beauty. For other open faces you’ll like to see at your table, try pumpkin with a lacy golden-brown cap, cranberry with meringue, and lemon with prunes.

Apple in any of its many versions is always a sure-fire hit, but it reaches a new high in flavor with walnuts, dates and a little lemon to give it zip. Here’s a specialty for any occasion, provided your pastry is worthy of its delicious filling.

Savory pies fulfill a main-course function with as much distinction as their sweetnatured fellows serve the purpose of dessert. Chicken and thick, luscious gravy under a biscuit or pastry crust is something to crow about.

There’s an “R” in the month, which means that oysters are here and it’s well to make the most of them. They're at their best and plumpest in a pie, or so everyone will believe if you set this gorgeous dish on your buffet table, serve it at your luncheon party, or as a hearty snack when the young folks troop in after an evening of winter sports. For simpler dinners you won’t go wrong with beefsteak and kidney, veal

and ham. four and twenty blackbirds, or some other savory but often inexpensive filling.

It’s as easy as pie to please them with pie. So good luck to all pastry cooks -and a Merry Christmas to all pie-eaters.

2 Cupfuls of mashed cooked or

Y Teaspoon ful each of mace.

Reserve one-half cupful of the cocoanut to sprinkle over the top of the pie and combine the rest with the pumpkin, sugar, spices, melted butter and slightly beaten eggs. Gradually stir in the scalded milk, mix well and pour into the unbaked pie shell. Bake in a hot oven—450 deg. P'ahr. —for twenty minutes, then reduce the heat to moderate—350 deg. Fahr.—and bake for twenty minutes longer. Sprinkle the half cupful of cocoanut over the surface of the pie. return to the moderate oven and bake for ten minutes, or until the filling is firm and the cocoanut delicately browned.

1 Can of sweetened condensed

Rick over and wash the cranberries, add the water and cook until the skins all pop open. Force through a sieve and combine with the condensed milk, the lemon juice and the lightly beaten egg yolks. Turn into the unbaked pie shell. Top with meringue made by beating the egg whites until stiff, adding the sugar and continuing to beat until the mixture will stand in peaks. Place in a slow oven—325 deg. P'ahr.—for about twenty minutes, or until the meringue is delicately browned. Cool before serving.

b to H Medium-sized apples

% Cupful of sugar Teaspoonful of salt

Line a pie plate with rolled pastry, cover the surface with peeled and cored, sliced apples. Pile the rest of the apples in the pie plate. Combine the chopped nuts and dates, the sugar and salt, and sprinkle over the apples. Dot with the butter and sprinkle writh the lemon juice and rind. Cover with rolled pastry, gashed like holly leaves, to allow the steam to escape. Seal the edges and bake in a hot oven — 450 deg. Fahr.—for about ten minutes. Reduce the heat to 350 deg. P'ahr. and cook for about forty to fifty minutes, or until the apples are tender.

I Cupful of cooked pames, stoned 12 Cupful of chopped walnuts 6 Tablespoonfuls of sugar

Combine the sugar, flour and salt and mix with the beaten egg yolks. Add the water and cook over hot water, stirring constantly until thick. Add the lemon juice and rind and the butter. Stir until well blended and turn the mixture into the baked pie shell. Cut the stoned prunes in pieces and arrange on top of the lemon filling. Sprinkle with the chopped walnuts. Cover with meringue made by adding the sugar to the stiffly beaten egg whites and continuing to beat until the mixture will stand in peaks. Bake in a moderate oven

375 deg. Fahr.—for about twenty minutes, or until delicately browned.

2 Cupfuls of apple juice or water Cupful of sugar

Combine the mincemeat with the apple juice or water and bring to boiling point.

Cook the fruit in a small amount of

water until the fruit is tender and the water absorbed. Add the sugar, the beaten egg and the lemon juice and rind. Mix well and fill baked tart shells almost full. Crisscross the tops with fine strips of unbaked pastry and bake in a moderate oven—350 deg. Fahr.—for twenty to twenty-five minutes.

Lj> to % Cupful of table cream

Wash the oysters, removing all bits of shell, and drain thoroughly. Roll in flour which has been lightly seasoned with salt and pepper and arrange half of them, close together in a single layer in a shallow, pastry-lined baking dish. Sprinkle with one half of the parsley, salt, pepper and paprika and cover with the remainder of the oysters. Add the remainder of the seasonings and pour on the oyster liquor. Cover with plain pastry, rolled to about one-eighth-inch thickness and gashed in the centre. Bake in a moderately hot oven—375 deg. Fahr.—for thirty to forty minutes, or until the pastry is nicely browned. Just before serving, pour the cream which has been heated, into the pie, through the gashes cut in the top. 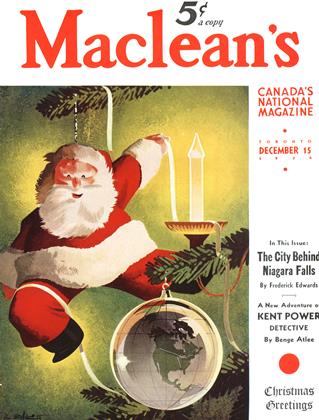